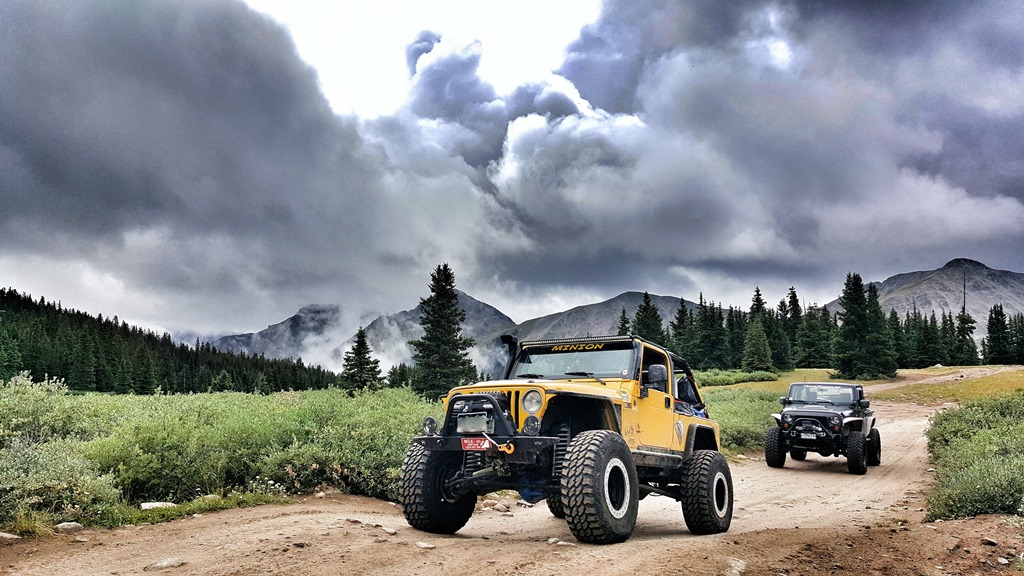 Cutting through two National Forests and crossing the Continental Divide at 12,154 feet, this off-road trail offers beautiful high alpine views while following the same route used by miners and prospectors searching for their fortunes in the late 1800's. This relatively easy route takes you from one historic mountain town, right into another. St. Elmo is a true ghost town that was built during the mining boom of the 1880's, while Tincup, originally called Virginia City, has been resurrected as a popular summer destination with many historic buildings still in use today.

The high-end rating of this trail is due to the "Old Tincup" route between waypoints 8 and 10. If you stick with the main route, the rating will not get above a 4. The entire trail is rough and rocky throughout.

Tincup Pass can be ran from either side and neither direction makes the trip harder than the other direction. Starting in the ghost town of St. Elmo, follow signs through town to reach the start of the trail. The route begins fairly smooth but quickly becomes rocky and rough and stays that way the entire length of the trail. Driving through the trees, you pass many awesome primitive camp spots that tend to fill up rather quickly during the weekends. Once above treeline, the trail narrows a bit with a few switchbacks that lead you across a shelf portion that can have snow covering it into early or even mid July. The north side of the pass is slightly more rocky than the south but is still relatively easy if you stay on the primary route. The route can be made more difficult if taking the old tincup route which has one large boulder section and is very narrow with overgrown brush. NOTE: The GPX track available here follows the hardest path through Old Tincup. If you are unsure of your rig's capabilities through this section, please stay on the primary route described in waypoint 8. Follow the trail down to a water crossing at Mirror Lake where it becomes a graded dirt road just past the parking area.
Boulders along the Old Tincup Route are much larger than the main Tincup route.

Although considered a ghost town, St. Elmo is still inhabited and the general store welcomes visitors every summer. The town was once home to 2,000 people after it was founded in 1880. The declining mining industry of the 1920s, and the discontinued railroad service drastically changed the town, and by 1952, even the postal service was discontinued.

The official start of the trail begins at FSR 267. Take the right fork and head uphill following the rocky path.

The Colorado Trail is an established, marked, and mostly non-motorized trail open to hikers, horse riders, and bicyclists. From the eastern terminus at Waterton Canyon, southwest of Denver, the trail winds its way for 486 miles through the state's most mountainous regions, to its final conclusion, just north of Durango. Along the way, it passes through eight mountain ranges, six National Forests, and six wilderness areas. For more information, check out The Colorado Trail Foundation.

As you approach the final climb up the pass, this would be a good location for a potty break as the trees thin out.

At 12,154 feet, you pass over the Continental Divide, leaving San Isabel National Forest and enter Gunnison National Forest. The area is large enough to accommodate many users without blocking the trail. To the southwest you will see Fitzpatrick Peak. To the northeast you see Emma Burr Mountain.

If you are looking for more of a challenge, this is where Tincup gathers it's high end 6 rating. The primary route heads west at the FSR 267 marker, while the Old Tincup route heads north at this Y intersection. Old Tincup is a shorter distance route, but is much more difficult with large boulders and overgrown brush making it difficult to pass oncoming traffic.

Along the Old Tincup route, stay right and continue downhill at this unknown road spur.

Continue moving downhill as the two routes merge once again.

The road passes through the water on the southeast edge of Mirror Lake where the water levels will change depending on the time of year. Some years, the entire road along the east side of the lake can totally be submerged due to spring runoff. On the north end of the lake, you will find a small parking area usually filled with vehicles that brought up the many fisherman who fish the lake.

Tincup ends at FSR 765. Heading north will take you to Taylor Park and Cottonwood Pass, which would lead you into Buena Vista. Heading south will take you over Cumberland Pass into Pitkin, past the Alpine Tunnel road, and will eventually hit Highway 285 on it's way to Gunnison.

Camping on the Pitkin side of the pass has been reevaluated as of May 2017. Please refer to THIS MAP for camping restrictions. There are many dispersed camping spots along both ends of the pass, many of them large enough for any size group. Please follow any fire bans that might be in place at the time. There are many developed campgrounds off CR 162, east of St. Elmo, including Iron City Campground, Cascade Campground, and many others. 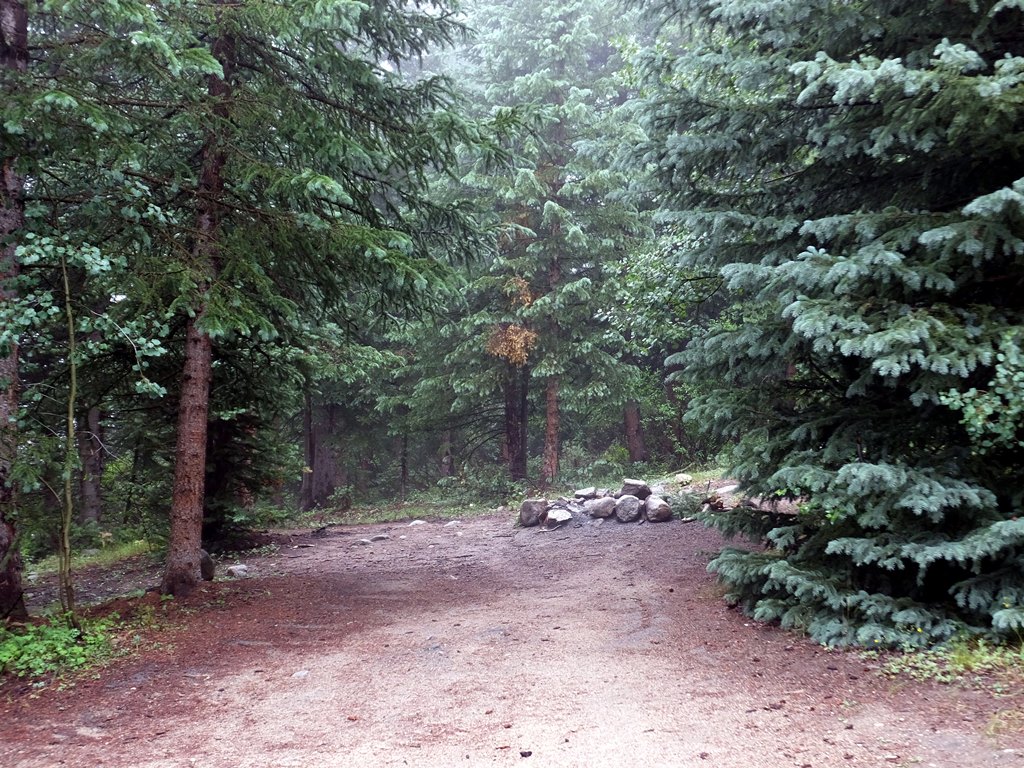 Travel along the "Old Tincup" route mentioned in waypoint 8 requires an OHV Permit for ALL vehicles, including street legal plated vehicles. Visit the Colorado Parks & Wildlife website to read more information on how to purchase OHV registrations and permits, and the projects that the OHV Registration program funds, call (303) 791-1920, or visit one of the OHV Registration Locations.
More Information

Q: The info above states that this trail is typically open "Year Round" yet we know that it closes for the winter.
–Neal A. Tew (12/23/2020)
A: That section is for noting seasonal closure dates mandated by the Forest Service. Tincup does not currently have a mandated seasonal closure, so it can be attempted by vehicles year-round if they choose. The snow makes it impassable, yes, and the current status line notes that. Closed and Impassable are different scenarios.
–Ryan Boudreau (12/24/2020)
Q: Wanting to take the St Elmo Tin Cup loop on Thursday 6/11/2020 do you think it is open? Will be at Rainbow Lake Resort for 3 days. Would take suggestions. Beating the heat in Kansas 102 today. Thanks
–Steven Landgraf (06/06/2020)
A: The trail is only open to treeline on both sides. None of the passes in the area are open all the way over. All of the trails are currently in and back outs right now.
–Ryan Boudreau (06/06/2020)
Q: Has anyone been able to get through to Taylor Park from St. Elmo this year?
– (07/28/2019)
A: No. As of a week ago, the pass was still unpassable due to snow on the St Elmo side and Mirror Lake out of Tin Cup is flooded over the road on their side.
–Ryan Boudreau (07/29/2019)
Q: could a '15 power wagon make the old Tin Cup trail? LArge truck - but comes with good 4x4 platform (front/rear locker and sway bar disconnect, etc.) Mine has 35" tires as well - thx
–Matt Rotter (01/20/2019)
A: Honestly, I am not sure, It is tight with some big boulders and if you get in there and decide it's not for you, there is no place to turn around. All of the boulders are on the north end so if you are coming from Mirror Lake, you can easily park on the main route and walk in a little ways to decide for yourself if you can make it.
–Ryan Boudreau (01/21/2019)
Q: Is it possible to bypass Old Tincup Pass Road, and continue on FSR 267?
–Tony (07/16/2018)
A: Absolutely. Old Tin Cup is 100% optional. Sticking to the primary route keeps the rating at about a 3-4.
–Ryan Boudreau (07/16/2018)