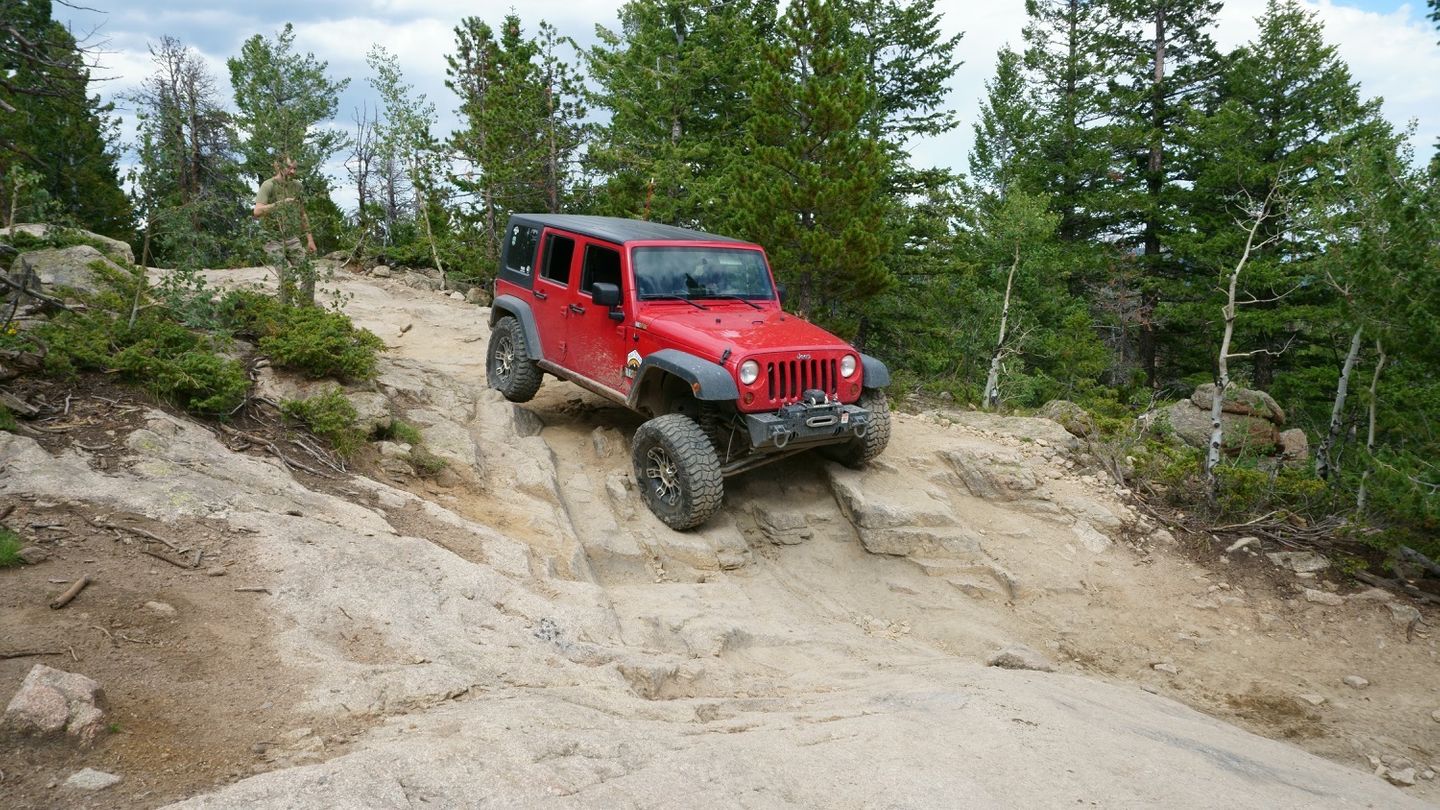 On June 27th, 1965 United States Airforce Major Currie and 1st Lieutenant Darby veered from their flight path in a Lockheed Martin T-33 trainer jet and crashed into the mountainside in the Arapahoe National Forest. Both crew lost their lives and what remains today are the remnants of the aircraft. This off-road trail takes you within walking distance of the somber and memorialized scene also known as "The Bunce School Road Plane Crash". Close to Denver, Boulder and Fort Collins Colorado this more difficult 4wd trail is popular to run in combination with Bunce School Road, Ironclads and Middle St. Vrain.

Obstacles at Waypoint 4 and 5 are the hardest with no bypass. Trees at the end make full-size trucks not a good choice on this trail.

The road is comprised of dirt and rock with two obstacles which can not be bypassed. The majority of this trail is tight with few places to pass opposing vehicles, so always look as far ahead as possible for someone coming towards you. The obstacles can be difficult for stock vehicles. Being lifted is recommended. This is an out and back trail and is popular to run with Bunce School Road, Ironclads and Middle St. Vrain.

The rough portions of the trail begin here. You can pick and choose your lines until the next non-optional obstacle.

You can approach the obstacle from the right or left. Coming down is more tricky for stock vehicles where a rear bumper tap can happen. When descending, if your vehicle does not have much downward front axle travel or not lifted - stay left. It is common to see vehicles have their rear passenger tire in the air on the descent.

Optional choices here to either tackle the large boulders in the rock garden by going straight/left, or turn sharp right to put your driver tires up on a smaller boulder and be off camber into the trees on your driver side.

Long wheelbase rigs will have a very difficult time squeezing through the trees here.

There is room for 5 or 6 rigs to park here. The hiking trail to the wreckage is well marked. A short 5-minute walk will take you to the bulk of the wreckage that is still complete with painted markings. Pieces are scattered throughout the area. This is a memorial location where two people have died, so please leave the wreckage as you found it.

To get to the T-33 Plane Crash trail you will need to run a small portion of Bunce School Road and Park Creek Trail. From Nederland: Take Highway 72 (Peak-2-Peak Highway) north. In approximately 18 miles you will reach Camp Dick on your left. Turn into Camp Dick and follow the paved road back until you reach Bunce School Road which will be on your right. Turn right and follow the trail for approximately 1 mile until you reach Park Creek Trail on your left. The trailhead is at Park Creek Trail - Waypoint 2.

There are only one or two less than ideal dispersed camping locations along this trail. Most people camp along the popular Bunce School Road. For designated and improved camping, this trail is just near Camp Dick which has 41 designated fee sites and vault toilets. 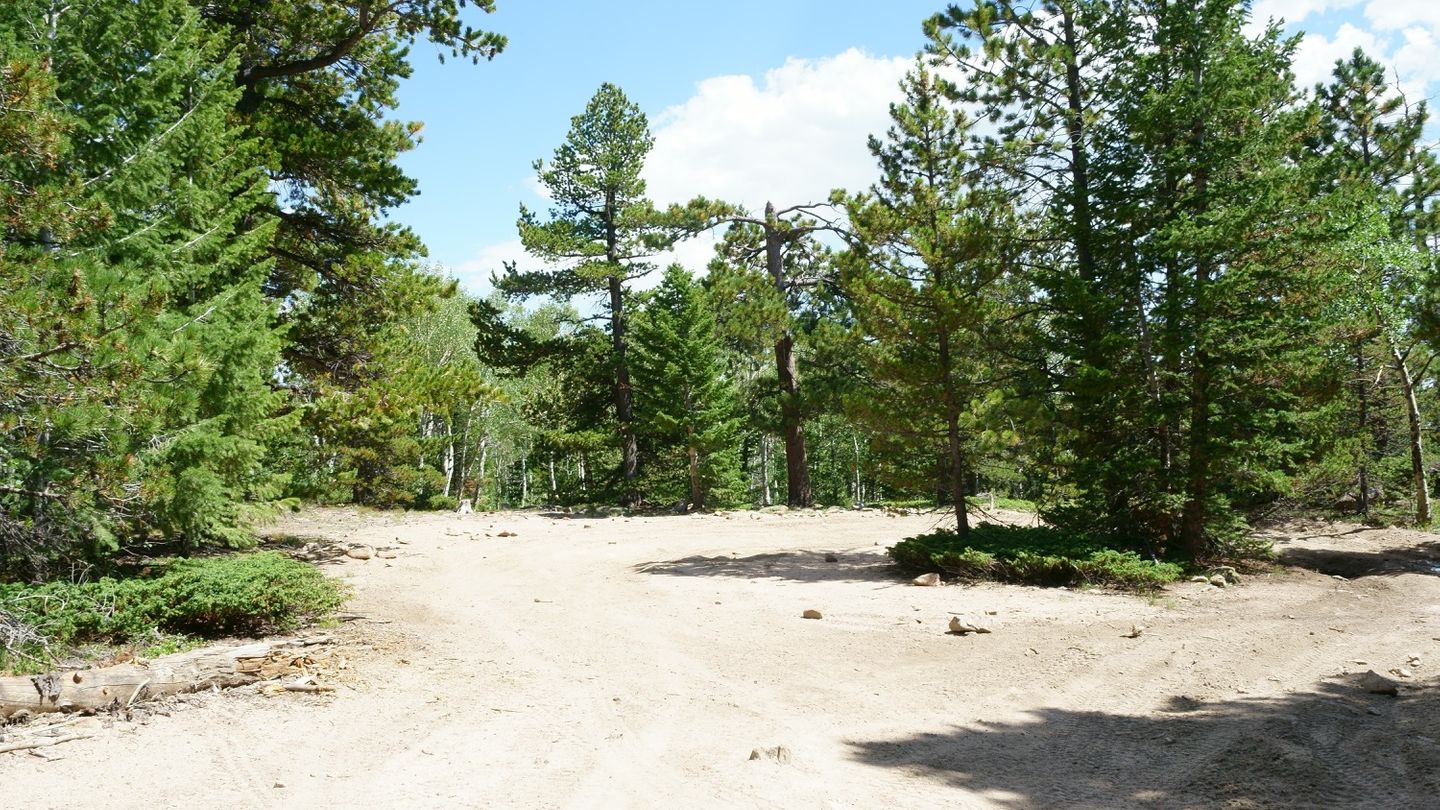 Q: Any updates on this trail being accessible. I see ironclads is good to go, anyone been on this one yet this season?
–Adam Meyers (04/25/2019)
A: This trail is closed still. Here is the link to the Boulder Ranger District statuses https://www.fs.usda.gov/detail/arp/recreation/?cid=stelprdb5339508. Ironclads is still accessible this time of year. Hope that helps!
–John (04/25/2019)
Q: Hi John, i would ask you an opinion: do you think i can do this trail with a full stock ford f-150? Thanks!
–Lorenzo Redaelli (04/01/2019)
A: Hi Lorenzo, to be honest, I think a stock full size would struggle with this trail. There are tight trees as you approach the end, and waypoint 4 definitely be good to have a bit of clearance and larger tires. Hope that helps!
–John (04/01/2019)
Q: The directions say that the trail is south of Nederland when in fact it is north of Nederland.
–John Lefebvre (08/31/2018)
A: Thanks for catching that John!
–Todd (09/04/2018)
Q: Anyone ever take a fullsize truck up this trail? I have a 4dr f350 long bed 6"lift on 37s. Thanks in advance!
–Rolando (08/14/2018)
A: Ground clearance you would have no issue - its the turns through the trees at waypoint 8 which would cause a major issue.
–Todd (08/15/2018)
Q: Can you take ATVs on this trail? And is there a spot to park a truck and trailer at the trailhead?
–Dylan (06/27/2018)
A: Yes, you can take ATV on this trail. There is no designated parking location for trailers by the trailhead, but all along Bunce School there are spaces. Wherever you park, be mindful of other traffic and park with consideration. Have fun be safe out there!
–Todd (06/29/2018)

Read More
John is a Colorado native who's been 4 wheeling since he got his first tacoma. His original goal of 4 wheeling was to get back into the campsites the Subarus couldn't quite get to. One trip after another, and now it's pretty much consumed all of his free time. He is currently living in Laporte, CO. When he is not coding for Trails Offroad or 4 wheeling, he also enjoys hiking, skiing, snowmobiling, and mountain biking.
For individual use only, not to be shared.