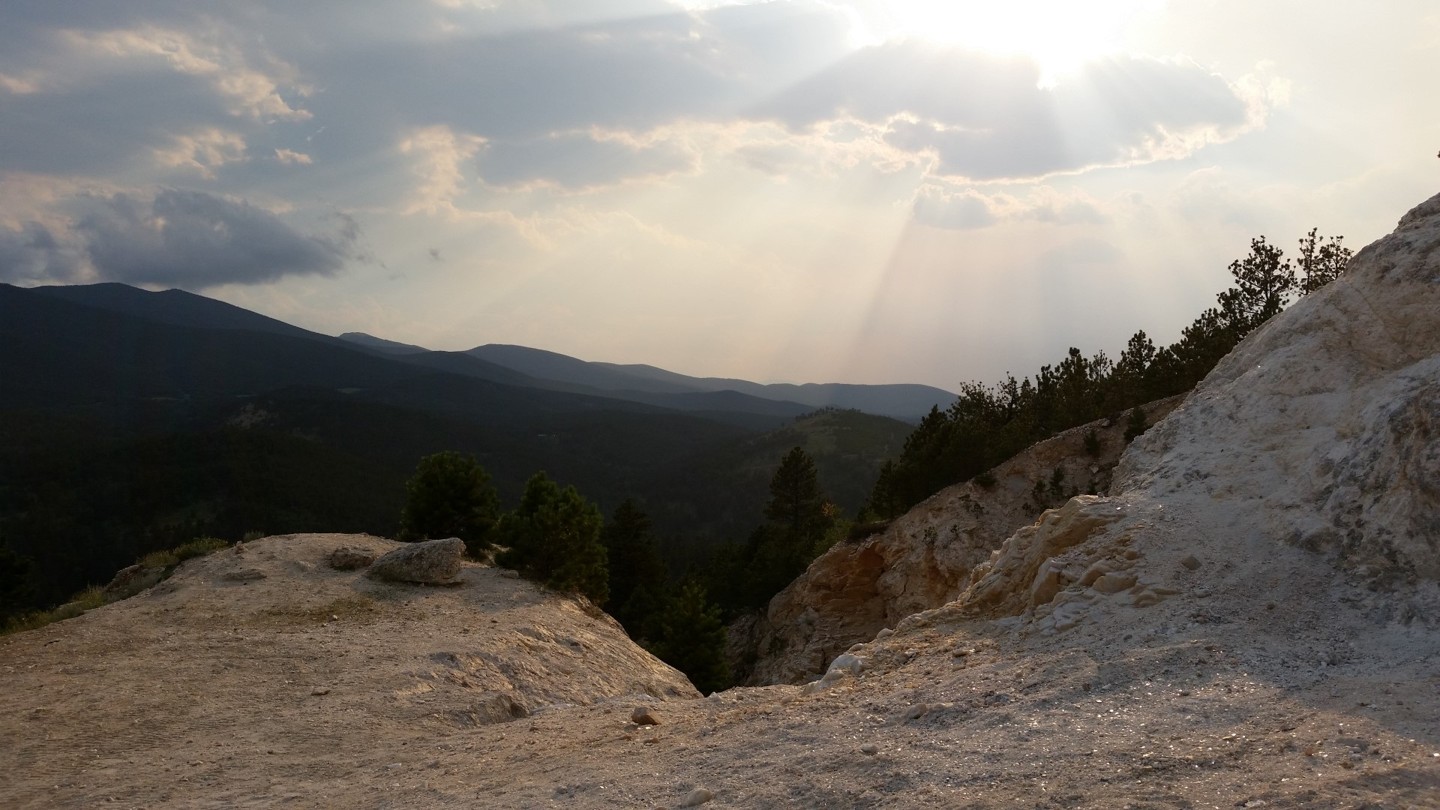 Moody Hill is an awesome rock crawling trail located 30 minutes west of Fort Collins, CO. It offers an exciting steep climb into the Roosevelt National Forest and ending at The Quarry, a rock crawling garden, that's not for the faint of heart. It is a popular area for local offroaders and it's common to see large groups here taking turns pushing the limits of their rigs. This trail is a must do for the locals and traveling rock crawlers alike, if in the area be sure to check it out.

Beginning of Moody Hill off of Buckhorn Road. There is a large parking area just to the north with lots of room for trailer parking and doing trail prep to your vehicle before starting the trail.

From Fort Collins head west on Harmony Rd, it will turn into CR 38E and take you around Horsetooth Reservoir. Once you get to the small town of Masonville CR 38E will turn into Buckhorn Rd. Continue for 10.7 miles to a fork, stay left on Buckhorn Road traveling west. Continue for another 1.6 miles and the Moody Hill gate will be on the left (south) with a parking area on the right (north).

The Cameron Peak fire west of Fort Collins continues to grow, prompting additional closures to the Roosevelt National Forest. The trail is affected by the Forest Closure Order effective 08-20-2020. Ongoing information about the fire, it’s progress, evacuations and closures can be found at Inciweb.gov website.
According to the MVUM, Moody Hill is officially open
I tried this trial for the 1st time and well I start juicy and fun since the gate, but no to long after I found a rock that I didn't wanted to risk my no lifted 2002 Xterra, maybe i could get over it but I need to calculate the lines, so I wouldn't bottom up or slip. The trial is wet due to snow melting, I had running water down hill. I would recommend to go sure about what to do bc Is really hard to turn around at that point.
Never been on moody before, it was pretty fun in my Colorado. First time doing a bit of rock crawling like that.
Trail was muddy and the rocks were wet, but I didn't want to try this specific rock outcropping near the beginning. I don't have enough breakover angle or sliders installed so I was not willing to risk it. I suspect that the trail has washed out a bit due to all the moisture and has made some rocks stick out more. Vehicle is a stock Tacoma.
This trail is open for the season as of 6/15! https://www.fs.usda.gov/detail/arp/recreation/?cid=stelprdb5300963
Great trail with nice steep climbs right off the bat. It looked intimidating to me being a newbie, but we made it through without issue in our TJ. There's lots of trees, a beautiful meadow, and a great view up at the quarry. There was little evidence of the leaves turning colors, but I bet it'll be prime time for fall colors in a couple weeks.
One of the features that attracts drivers to Moody Hill is how steep it is to climb. Over the past few years, erosion has exposed rocks creating a couple of obstacles along the initial ascent. Nothing so serious that a stock JKU is turned away, but enough to make the trail a bit more exhilarating. A little afternoon shower made the quarry nearly impossible without a little top rope assistance. The trail was really crowded today with many vehicles going up and down the trail making for a bit of a mountain road traffic jam from time-to-time. Patience prevailed and the day was enjoyable.
This is a fun one. The initial climb out of Buckhorn gulch has a couple of tougher spots and you tend to see some amusing full size trucks with open diffs do some tire spinning. Be careful for tons of OHV action. Dirt bikes and ATV's are everywhere.

The quarry is where the action is. On weekends be prepared for a crowd at the top offering plenty of advice but never trying the obstacles, even though their jeeps look to be built. Ha! It never fails at this place. Mainly everything is a lot more exposed than pictures give it credit for. So lots of people take a look at the quarry and shy away.

The lower half of the quarry could be negotiated with just a rear locker and some luck. Don't try the upper part unless you are locked front and back. You don't need a ton of clearance if you pick the right line, but you do need traction. "The Wall" at the very top needs a rear locker on the easy line. The other ones are tougher and I have seen flops there so be careful.
Trails Off Road partnered with The Mountaineers, a Colorado 4x4 club, to assist the USFS in getting Moody Hill open a few weeks early. Favorable spring weather conditions allowed the Forest Service to open the trail two weeks earlier than normal. Trails Off Road and The Mountaineers cleared the trail of downed trees that fell during the past winter. After clearing the trail, the USFS officially opened the trail for the 2018 season.
This trail is now closed for the season
Great day for some wheelin'. Took the Power Wagon up to the Quarry. The first part of the trail was a little roughed up at the first rock ledge where it looked like some vehicles had been stuck in the mud. Other than that, it was smooth sailing. It was a beautiful day!
Very dusty, but otherwise great conditions and good weather. Great trail for stock rigs, we had 5 in our group today. Played around at the bottom and middle levels of the quarry and had some fun with a 4Runner on a 3" lift and 32s...a couple obstacles are doable with a spotter.
Thanks for clearing the trail! I just got back from riding it for the first time, it was in great condition. I made it easily in stock 2007 Tundra 4x4 with 31" BFG KO2's, very good trail if you have a little experience.
This morning the USFS opened the Moody Hill trail. We were able to assist the USFS with the opening by clearing out the winter-time down fall. Approximately two dozen trees were removed including a couple of widow makers leaning precariously across the trail. The downed and dangerous trees were removed and the trail is now open.

Read More
Bradley and Rhea are currently living in the quaint little town of Fairburn, South Dakota with their two daughters, Riley and Dakota, and their dog Nyx. Bradley was raised in Northern Colorado, while Rhea was raised in the Black Hills of South Dakota. Growing up in these environments, the mountains are where they like to spend their free time. Since meeting in July 2011, they have been fishing, camping, and wheeling together ever since. For the Mikkelson family, owning a Jeep is essential to the mountaineering lifestyle. They currently have three Jeeps, a built 1995 Jeep Cherokee, A mildly built 2000 Jeep Grand Cherokee, and a bone-stock 1996 Jeep Grand Cherokee. As a volunteer wildland firefighter, TrailsOffroad mapping crew and avid nature lovers, the Mikkelson's strongly encourage responsible trail usage, respect for our forests, always stay the trail, pack out what you pack in, and enjoy the adventure!
For individual use only, not to be shared.