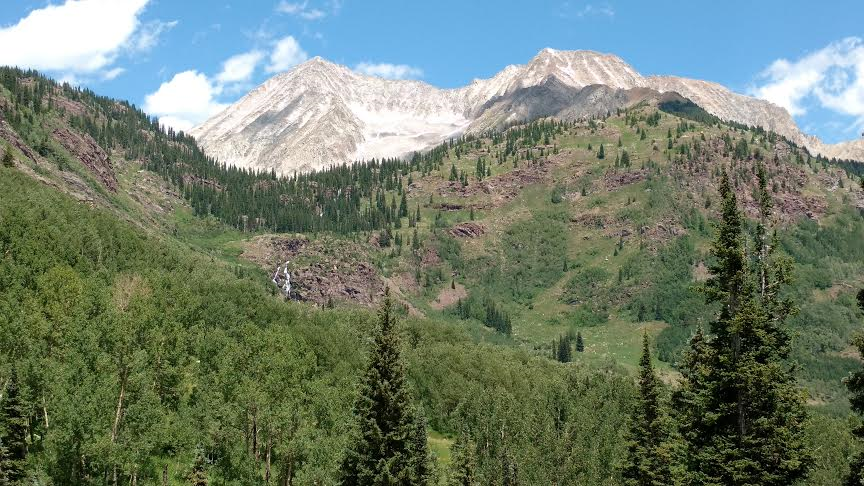 Lead King Basin is another iconic four-wheel drive road in the Crested Butte, Colorado area. It provides spectacular views of several nearby 14,000-ft mountains, plus the rugged Snowmass and Maroon Bells Wilderness Area. The road closes seasonally in the winter, but the summer season presents remarkable wildflowers and panoramic views.

Switchbacks on the eastern segment give this trail its difficulty rating.

Lead King Basin is relatively smooth with few rocky sections and occasional ruts and intermittent water from snowmelt/runoff. From the trailhead, the road climbs gradually and then evens-out as it traverses the ridge approaching the basin. Toward the eastern end, there are numerous switchbacks that descend into the basin and onward to the road’s end at an intersection with Schofield Pass Road. NOTES ON SEASONAL CLOSURE: FS Road 315 (Lead King Basin) closes seasonally each year from November 22nd to May 21st. The closure is from Mile Post 1.1 (from the west end, near the intersection with FS Road 314 (Schofield Pass) to the intersection with FS Road 314 (Schofield Pass) on the east side of the village of Crystal. See the White River National Forest (Aspen/Sopris District) MVUM here: https://www.fs.usda.gov/Internet/FSE_DOCUMENTS/fseprd506000.pdf

Steer left at the Y. The spur dead-ends after a short distance. The road briefly becomes more rocky in this vicinity.

This switchback provides a fantastic view back toward the western trailhead.

The road levels-out here, following the ridge to the east. More panoramic views from this point.

From this point, one begins to see the Snowmass and Maroon Bells Wilderness Area. Proceed east toward the descending switchbacks.

Most drivers (and passengers) on Lead King Basin are distracted by the expansive, panoramic views; they often miss seeing this waterfall.

Proceed with caution around the final switchback, which emerges at an intersection with the Crystal City Trail and Schofield Pass Road. Turn west to go toward Crystal, the Crystal Mill, and Marble. Turn east to take-on the Schofield Pass, featuring the Devil's Punchbowl, and onwards to Schofield Park, Paradise Divide, and Crested Butte.

Lead King Basin can be driven from either direction—west to east, or east to west. The western trailhead is on the Crystal City Trail, about 1.5 miles east of Marble and Beaver Lake. The eastern trailhead is one-half mile east of Crystal, at the end of the Crystal City Trail where that trail intersects with Lead King Basin and Schofield Pass. Both eastern and western trailheads are marked with brown U.S. Forest Service signs. From Glenwood Springs, drive south to Carbondale on Highway 82, and then continue south on County Road 133 toward Redstone. Five miles beyond Redstone, turn east on Highway 3 toward Marble. In Marble, at the intersection of Second Street and Silver Street, turn east toward Beaver Lake; this is the Crystal City Trail. Follow it for approximately 1.5 miles to the three way intersection with Lead King Basin (also called Lost Creek Trail on Google Maps). From Crested Butte, travel north on Gothic Road (County Road 317) for approximately 13 miles. At the north end of Gothic Road is an intersection with Slate River Road (County Road 734), about one-half mile south of Schofield Park (where the brown Forest Service sign indicates "Schofield Park"). Proceed straight on CR 317, across Schofield Park, and down the Devil’s Punchbowl. One-half mile before arriving to Crystal, a U.S. Forest Service sign marks the intersection with Lead King Basin.

Lead King Basin has numerous dispersed campsites throughout it’s course such as pullouts at Waypoints 4 and 6. Be aware that private property borders the National Forest in the vicinity of the eastern trailhead (intersection with Crystal City Trail east of Crystal). The U.S. Forest Service maintains three campgrounds in the Crested Butte area. See the Forest Service Campgrounds page for more information. 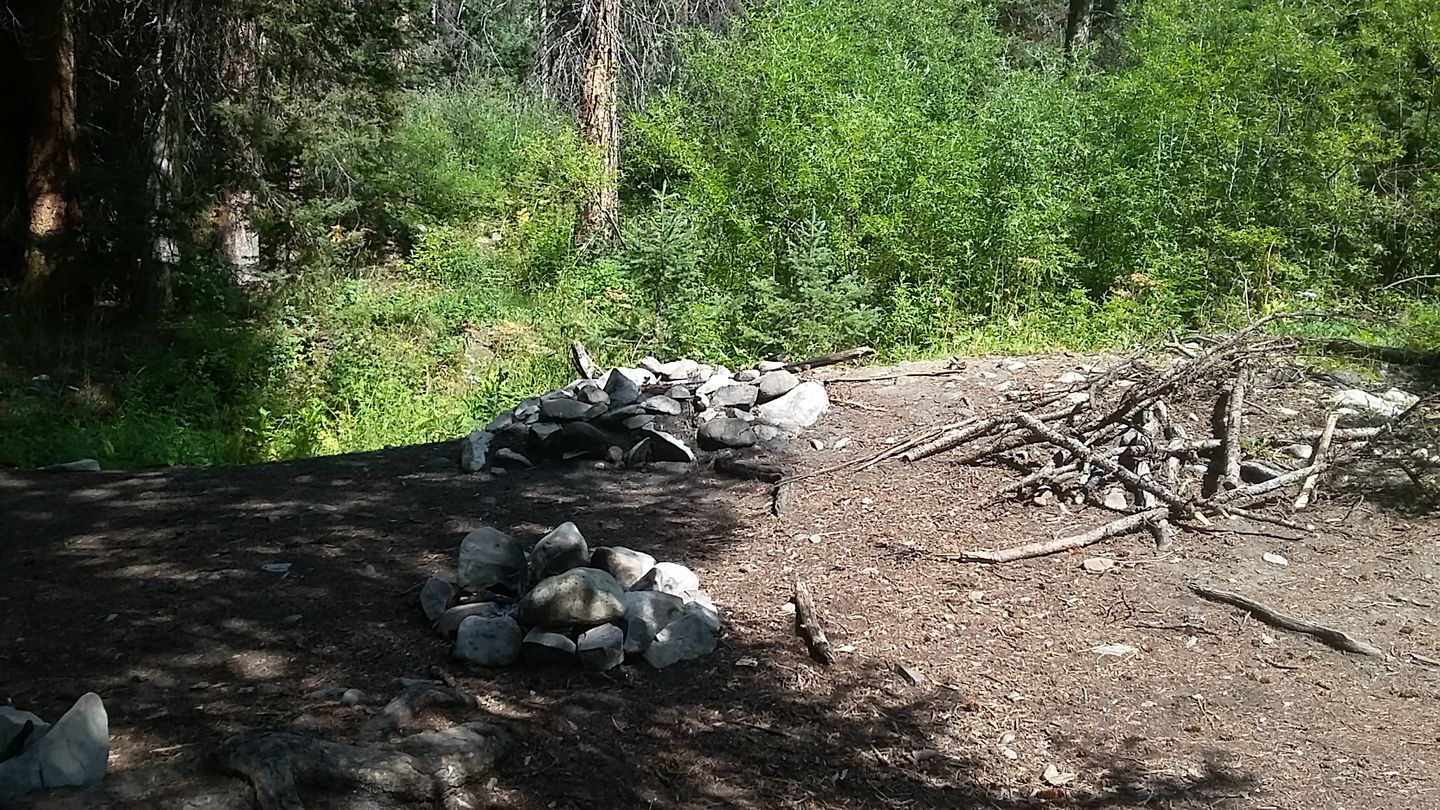 Q: We are wanting to hike to Geneva Lake. We are coming in a RAM 2500 Cummins with a Four Wheel Camper. Is the avalanche passable in this vehicle? If not, does Crystal City allow access to the trailhead and is it wide enough for my truck? Lastly, can you camp at the trailhead for a night? Spot beyond looks to be private property.
–Colin Bacanskas (07/07/2020)
A: If you are referring to the truck bed camper I see in your profile pic, then yea, that's not going to be any additional issues. Like stated, definitely not a trailer camper though. The avalanche might be tough, but I think you could make it. As for camping, there is no camping at the trailhead. It is all private property. You have to drive in a couple of miles before you are on Forest Service land and dispersed camping is allowed.
–Ryan Boudreau (07/13/2020)
A: A: I just drove this loop a few weeks ago and did that same hike. In my opinion it would be tough getting that truck through the avalanche going uphill because its all snow underneath and it’s a pretty tight fit. I had to use rear lockers due to the snow there. It may be doable but would be a little more tough. You can also get to it by starting on the Crystal side of the loop, just be ready for very narrow shelf roads and a few tight turns on switchbacks, and lots of traffic. That side might be a better bet for you but either way it will be tough bringing a full size truck with a camper (not sure what yours looks like). Definitely don’t bring a trailer camper though. The trailhead didn’t have a no camping sign but it is a parking lot for all the hikers there so I wouldn’t personally camp there. I doubt someone from the FS will be stopping by on the night you spend there however. There’s also a lot of private property in the area so camping options aren’t numerous. There are a a few spots closer to the Schofield Pass intersection (just north of it).
–Josh S (07/12/2020)
Q: Any mileage hints as to where some good secluded dispersed sites are along this road? We're making the drive out Thursday afternoon and hoping to find something that's not right next to the road...
–Tony T (06/19/2018)
A: Meadow Mountain is pretty steep. Any camping would have to be done further down the trail towards the basin. There is private property down there so make sure your on NFS land.
–DEVIN (11/03/2019)
A: In the area of Waypoint 6 is a primo Campsite near the waterfall. There are a few others, but all relatively close to the road. There is a high spot with a short spur pull- out between Waypoints 4 and 5 suitable for a ground tent or two trucks with rooftop tents.
–Tracy Barker (06/22/2018)
Q: How is the road in terms of water runoff and snow coverage? Would there be snow drifts on the road still?
–Jared (05/31/2018)
A: Earlier in the season, most definitely. Any time in July and August is usually fine.
–DEVIN (11/03/2019)
A: I drove the Lead King Basin yesterday (6/10/18), and there was zero snow on the roadway. We drove it from Crystal to Marble (the opposite direction shown on this website). The views were stellar, and the runoff was perfect. We have lots of video and pictures from the ride. We even met up with some kayakers at the waterfall and got footage of them. The drive wasn't bad at all in my 2007 Jeep Wrangler Unlimited Sahara. We didn't even need 4WD to do the drive.
–Michelle Schoen (06/11/2018)
A: Hi, Jared. I've not been on Lead King Basin since the USFS announced its opening on May 21.(ten days ago). Due to the exposure of this road,it is unlikely that there is snow remaining here unless it is in the canyon vicinity Waypoint 6.
–Tracy Barker (06/02/2018)
Q: If you want to do Lead King Basin in a loop with Crystal City, which direction is recommended?
–John West (08/20/2017)
A: Depends on what time of day. In the morning traffic is usually heading into Crystal from Marble. In the late afternoon, it is usually all coming from Crystal back to Marble. So, I would head up through Lead King from Marble and then drive through Crystal. That way you're not fighting traffic between Crystal and Marble
–DEVIN (11/03/2019)
A: As a loop, and excluding intent to subsequently drive up the Devil's Punchbowl/Schofield Pass, I would recommend approaching from Marble (west) and turn north/northeast to drive Lead King Basin. Then return through Crystal (headed west) to complete the loop.
–Tracy Barker (08/20/2017)

Read More
Tracy is an outdoor enthusiast originally from north Alabama. His family moved to central Utah when Tracy was a child, and subsequently to southern Utah, where he fell in love with the Rocky Mountains. His favorite activities are family trail rides and camping with small groups. He started many years ago in his dad's F-150 pickup truck, and subsequently his own 4x4 acquisition, a 1975 Ford Bronco (in 1991).
For individual use only, not to be shared.