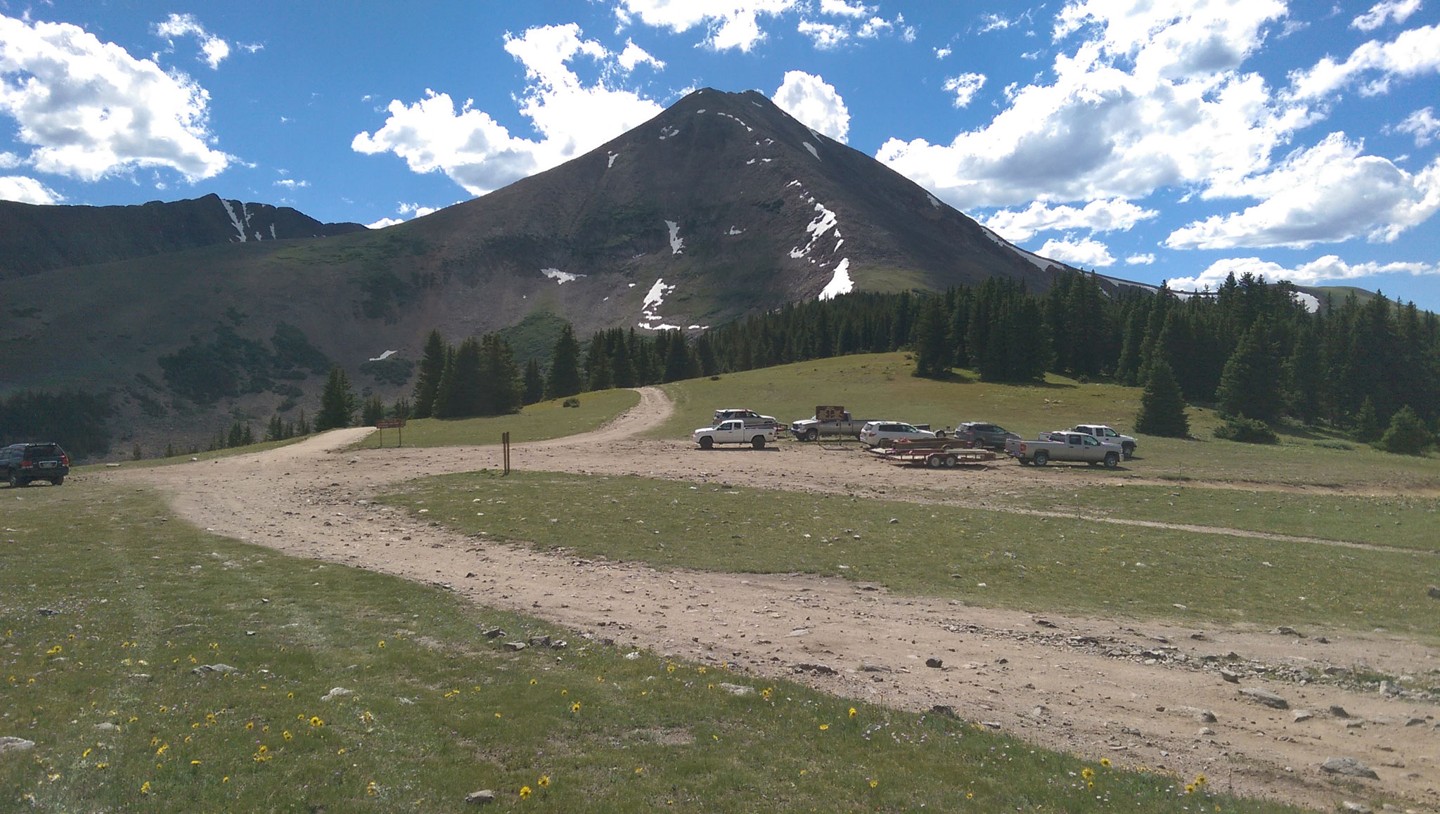 Georgia Pass is the middle and least trafficked of the three main passes over the Continental Divide in Summit County. To the east, Webster Pass is more popular with the 4WD crowd due to the well known and technical 4WD offroad trails it connects. To the west, Boreas Pass is easy and often clogged with tourists in minivans. The southern slope is an easy dirt road. The north, however, is where all the fun awaits! The trail summits in the saddle between Mount Guyot and Glacier Ridge with spectacular views of both the rugged Swan River Valley and the grassy plains of South Park. The Glacier Ridge 4WD trail meets this trail at the summit, connecting to the notorious rock garden, SOB Hill (a.k.a. Number 10 Road). On a historical note, Georgia Pass once served as the primary route into the Swan and Blue river valleys for gold-hungry miners. At the height of the rush, as many as 200 prospectors a day flooded over the pass, then called Swan River Pass, into the boom towns of Parkville, Swandyke, and Tiger. No trace remains of these once vibrant towns except for a few ruins in Swandyke. (Parkville was buried by river dredges in the 1880s. Tiger was intentionally burned to the ground by the Forest Service in the 1970s to "rid the area of squatters.") By the 1880s, Boreas and Hoosier passes had become easier and more civilized routes and Georgia was all but abandoned.

The south side of the pass is an easy dirt road passable in 2WD. If you only travel the south side, the trail is rated 1. The north side is a genuine 4WD trail. It's not overly difficult and can be done in a stock truck with good ground clearance and an experienced driver.

The northern slope of Georgia Pass begins as a relatively tame dirt road. Gradually, it becomes more rough, rocky, and narrow. The last mile before the summit is the hardest section with some tight rocky areas and some rutted, washed out dirt. The southern slope is all wide open dirt roads. Because of this, and because the summit is part of the Colorado Trail, it is sometimes crowded with sight-seers, hikers and their cars. Since the north slope is more interesting, it is usually run from north to south. Cell phone signals are spotty at best throughout the trail. The nearest emergency room is at St. Anthony Summit Medical Center (970-668-3300), located just off CO-9 south of Frisco. Summit County Sheriff office (970-453-2232) is on CO-9 in Breckenridge.
The summit area is often crowded with sight-seers and hikers. Take your time and keep your eyes peeled.

Adjacent to Snow Caps, a sled dog company, FS 355 leaves FS 6 at a right turn (west). Cross the dredge tailings and turn left (south). For a good while, the road is wide and well maintained. This area is a mix of private land and Summit County Open Space. No camping is allowed.

At a well marked fork, American Gulch/Humbug Hill, splits to the right (east). Go left, across a narrow bridge. Immediately after the bridge, a narrow trail goes left. This is a nice camping area with a short cut to Middle Fork Swan via a water crossing.

The gate is closed from November through May, "or until road is dry," which could be well into June if the previous winter was unusually snowy.

To the right, is the first of three access points to a road that runs parallel to this trail. The road has several campsites that range from large sites suitable for small campers to small, rough, sloped sites that may only invite hammocks. It should be noted that this "camping road" had a couple of muddy, rocky spots that may damage low clearance trailers. Scout it out before you haul it. A few yards beyond this fork are some cabin ruins. This section was once a long, shallow water crossing, but in 2017, the Forest Service filled it in with gravel. There is still a small water crossing if you take the right fork onto the camping road.

This site was once a popular campsite. There was also an old house that was popular with squatters. In 2017, the Forest Service razed both. Please respect the signage keep your wheels and your feet off the new vegetation. NO CAMPING at this site!

To the right, across a shallow water crossing, is the second of three access points to the camping road mentioned in Waypoint 4. Continue straight on FS 355. From here on, there are quite a few unmarked or poorly marked intersections. Most of these spurs either rejoin the trail later or dead end. Some offer nice campsites. As a general rule, stay on the more established trail.

Take the right fork to stay on FS 355. The left spur dead ends.

Here, a sharp right is the last of the three access points to the camping road mentioned in Waypoint 4.

Take the left fork to stay on FS 355. The right fork dead ends at a large campsite.

Continue straight. The trail to the right joins the previous fork which dead ends at a large campsite.

There is an established turn-around here in case the gate is locked. The next section of trail is very narrow with few opportunities to pass. If you have to back up to allow a downhill vehicle through, this is a good spot.

This hard left is easy to miss. Don't worry if you miss it. Going straight accesses a private gate, then leads back to the main trail.

There's a very narrow and off camber switchback leading down into this wide meadow. Some bone heads thought it would be fun to create a short cut here. Please don't be a bone head. STAY THE TRAIL!

For a couple hundred hards, the trail becomes very narrow and rocky. Trees crowd both sides and spring water flows down this "sluice" year round. Well into June (sometimes July!), this spring water, joined by snow runoff, freezes into a treacherous ice rink. (See third pic.) Skill and momentum can get you through (and lockers don't hurt). However, some folks chicken out and take a bypass to the right. PLEASE don't take this bypass in Spring or early Summer! It is muddy and easily damaged.

As the trees thin out, the trail gets considerably steeper with banked turns and washouts. [UPDATE: As of the summer of 2020, the Forest Service has destroyed and blocked off the braided routes, leaving only the tamest way through, to the far right (heading uphill). See the 3rd pic here for the new look.] Just before the summit, the trail is badly braided, with several variations through the washouts and ruts. It's impossible to say what is the "right way" through this, but still, please stay the trail! If the trail is too wet or snow covered or just too difficult, it's better to turn back than to destroy the tundra.

The summit is wide and flat. There will likely be a few cars parked here that came up the southern approach. Keep an eye out for hikers and cyclists. Several trails lead off from the summit. 355.1C and 355A are short spurs that dead end. 258 is the Glacier Ridge 4WD trail that leads to SOB Hill (a.k.a. Number 10 Road). This also connects to the Colorado Trail not far from the summit. The south side of the pass follows CR 54, a wide and relatively smooth road.

On the right is a large, collapsed cabin. Behind it is a nice campsite.

To the right is the Michigan Creek Campground. Find more information on this facility in the Camping section below.

FS 870, to the right, leads up to the Michigan Reservoirs. Continue downhill on CR 54. At a T-intersection, turn left onto CR 35 to get to US 285 at Jefferson. While your there grab a burger and shake at the Hungry Moose Caboose!

On CO-9, between Frisco and Breckenridge, turn northeast at the traffic light onto Tiger Road/Shores Lane. Zero odometer here. Pavement ends after 3 miles. Continue on Tiger Road past dredge trailings and a wide parking area on the right at 4.8 miles. At 5.7 miles, the road forks. To the left, FS 354 is North Fork Swan. Take FS 6, Middle Fork Swan, to the right across a narrow bridge. Continue through private land until, at 6.2 miles, just after the snowmobile/dog sled tour company, take the well-marked right turn onto FS 355, Georgia Pass. The southern trailhead can be reached from US 285. At the tiny town of Jefferson, CO, turn northwest onto CR 35, Michigan Creek Rd. Zero odometer here. After about 2.9 miles, bear right onto CR 54. At 5.4 miles, follow the sign to the left at a well-marked fork. This is the southern trailhead. Here we describe the trail beginning at the northern trailhead.

No camping is allowed along the mile of private land between the northern trailhead and American Gulch. After that, dispersed camping is allowed and there are established campsites all along the trail on both the north and south sides. Near the south trailhead, pay camping is available at the Michigan Creek Campground. More information can be found on the US Forest Service website. There are also National Forest campgrounds at nearby Lake Dillon. More civilized lodging can be found in Breckenridge, Frisco, Dillon, and Silverthorne. 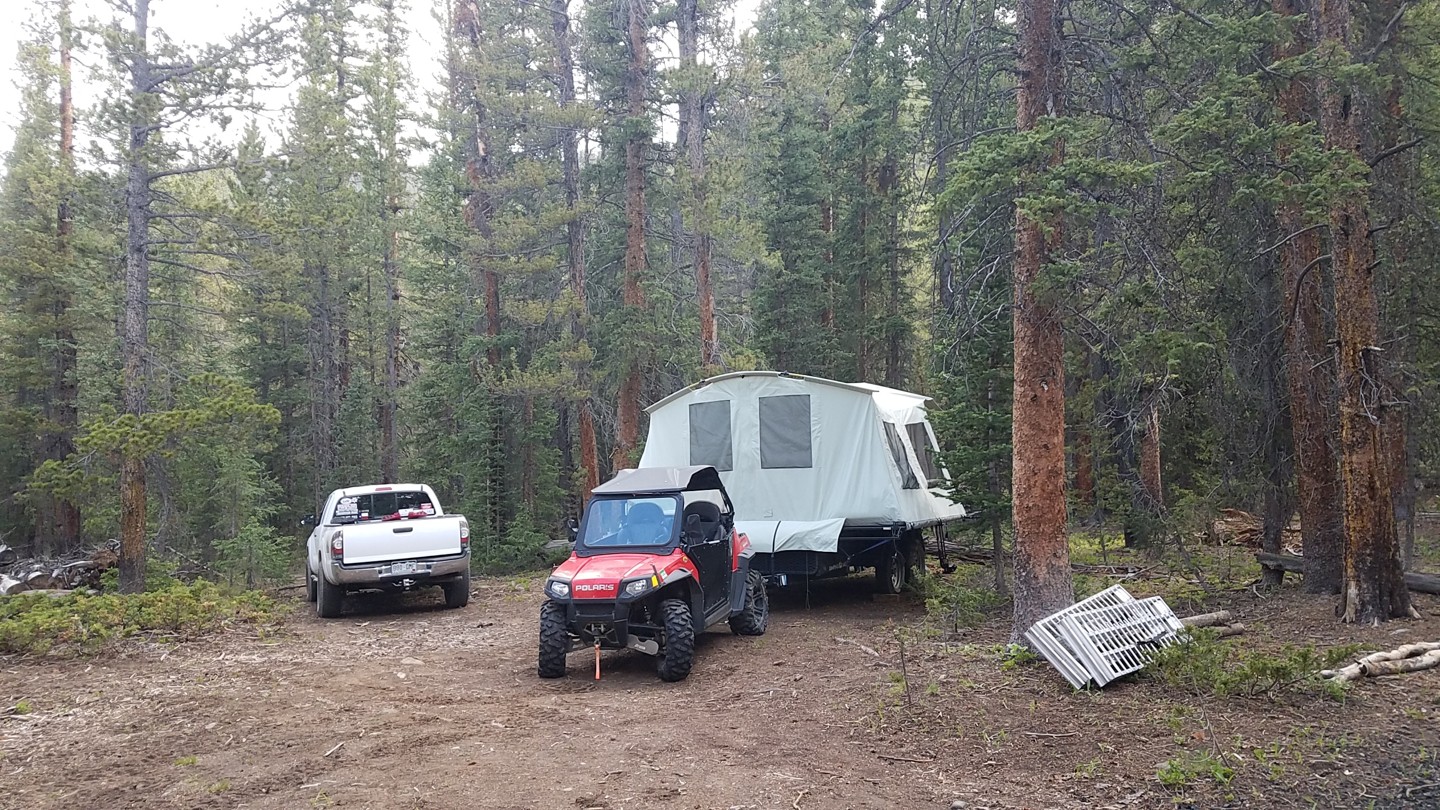