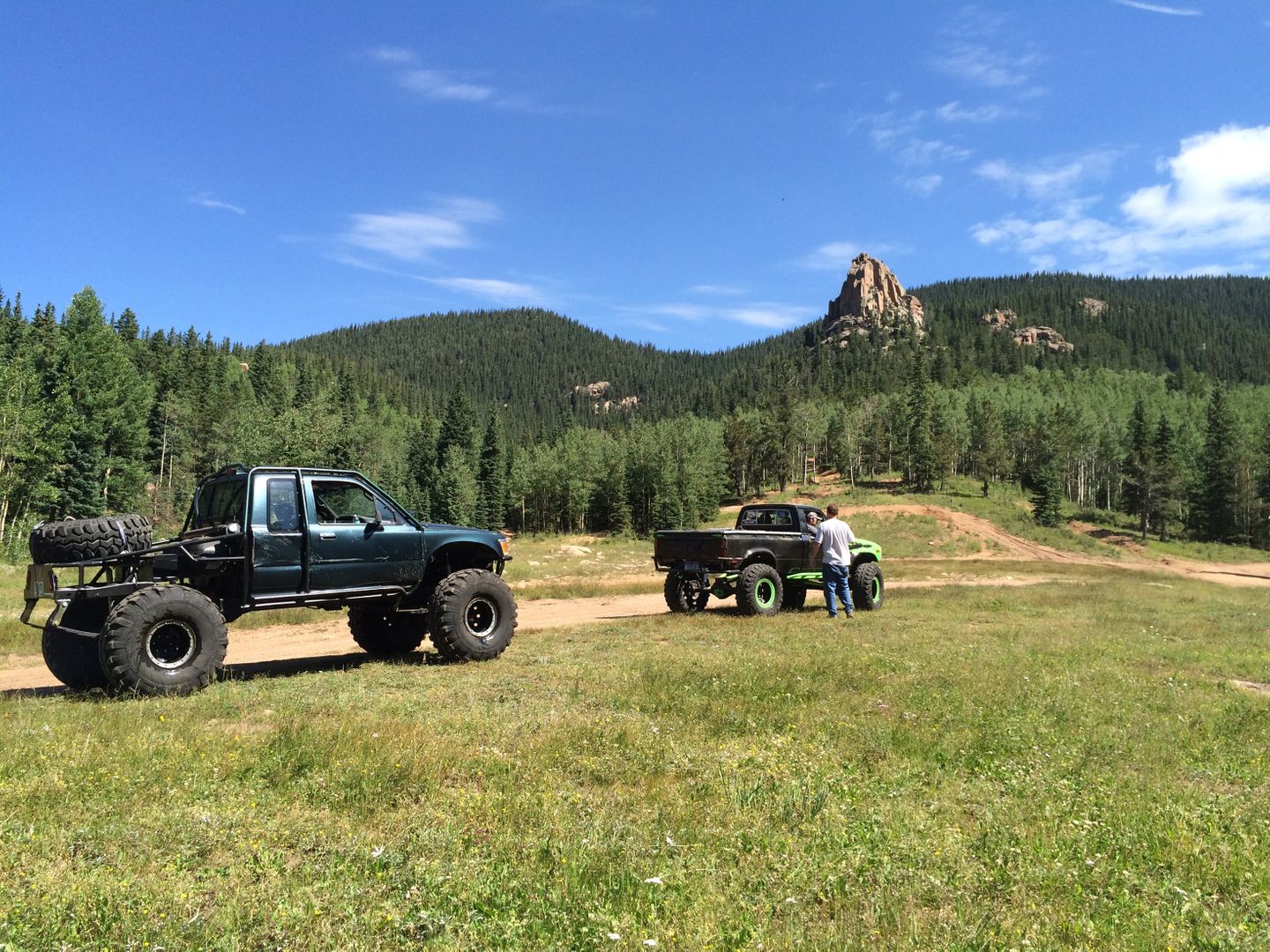 This is a great off-road trail that's close to Colorado Springs and provides a good challenge to vehicles that are a little more than stock but still offers some fun routes for more built rigs. There's also many trails in this area that you can explore that vary in level of difficulty. The drive up to the trail gives you great views of Colorado Springs. The first part of the trail consists of a large hill with rocks you must navigate through. There is a bypass for the first section, but the second area has similar rocks and some switchbacks. Most of the other obstacles have bypasses. There are a few creek crossings and areas that require you to squeeze through skinny spots in the trees. It's is an easy trip from the Springs but is also a nice getaway for camping.

(#1) This is the turn off from Upper Gold Camp Road that will take you to the trail head. It's a very large open area and usually there is a medium sized pond that you must drive through. (#3) View from Gold Camp Road looking at Colorado Springs.

From Colorado Springs, head south on I-25 and take exit 140 for Tejon St/Nevada Ave. Pass through the light and turn right onto Nevada Ave. About 1 mile down, take exit 46 onto Lake Ave. (The Home Depot on the left is a good meeting place for this trail.) Turn right (west) onto Lake Ave. Travel down about 1.4 miles, passing through two round-abouts. Once you hit the third round-about directly in front of the Broadmoor Hotel, make a left. Continue to follow what appears to be the main road. When viewed on a map the road name changes from Lake Circle at the round-about, to Pourtales Rd, to Mirada Rd, to W Cheyenne Mountain Blvd. After traveling another 1.4 miles, you will reach a four way stop intersection. Continue straight onto Old Stage Road. You'll pass through a neighborhood and about a mile later the road will turn into dirt. Follow this dirt road for 14 miles. There will be lots of turn offs, but stick to the main road. You will see a large dirt lot on your right, which usually has a big pond. This is the road that will take you right to the trail head.

There is a lot of off trail activity found in various areas. This can be a threat to trail closure. Remember to stay on all designated routes, do not go around obstacles, and do not go behind any fences. This area is part of Pike-San Isabel National Forest, and as such is part of the 2011 Lawsuit where a coalition of conservation and recreation groups are suing the U.S. Forest Service over what they say is the illegal addition of 500 miles of motorized roads and trails. A settlement was reached in late 2015 which requires the U.S. Forest Service to re-evaluate the roads and create a new travel management plan. Over the next year, 30 roads will be partially or completely closed while this evaluation proceeds over the next 5 years. It is imperative that the OHV community voices their interests on this issue. If we do nothing, those 500 miles may be shutdown. Contact the Pikes Peak Ranger District and let them know why the area is important to you.
More Information