Cherokee Park Road is a beautiful drive through the Roosevelt National Forest on the northwestern edge of the Colorado Rocky Mountains. It acts as the main artery, heading east and west, for a network of less maintained off-road Forest Service and private roads connecting the Red Feather Lakes all the way into Wyoming. Cherokee Park Road is also the main access to the Colorado State Cherokee Parks Hunting Units, a wildlife area that's only open to public use by licensed hunters during open hunting seasons. This trail is open year round as well as the connecting trails making it an awesome snow wheeling destination. Cherokee Park Road, with just under 45 miles of trail and the dozens of surrounding trails, make this is an excellent area to explore and trail to run with overland 4x4 vehicles.

Upgrade from free to our All-Access Membership and get every detail, waypoint, photo, and more on every single trail guide.
Start a 7-Day Free Trial
EASY

Start your next adventure on Cherokee Park Road

When you are an All-Access member, our trail guides come with a short video of the author running the trail to give you a visual understanding of what to expect.
Start a 7-Day Free Trial
Not allowed

3100
Status: Open
Rated 4/5
Visited: 06/19/2022
Difficulty Accuracy: Spot On
Nice easy drive with not many crowds. I have been on the road when snowy or mud then it can be difficult otherwise the family sedan is all you need. Lots of dispersed camping too which is nice.
David Bauer

600
Status: Open
Rated 4/5
Visited: 08/07/2021
Great road to get out into the mountains north of Fort Collins in whatever you drive. Looked like some good dispersed camping on the Western 1/3 of the road.

Matt Ewalt
Official Crew
1400
Status: Open
Rated 4/5
Visited: 05/28/2021
Traversed east to west on my BMW R1200GS. Overall Trail was dry and in great shape. Most of the good camping spots were already taken, but that shouldn’t be too surprising for the Friday of Memorial Day weekend. 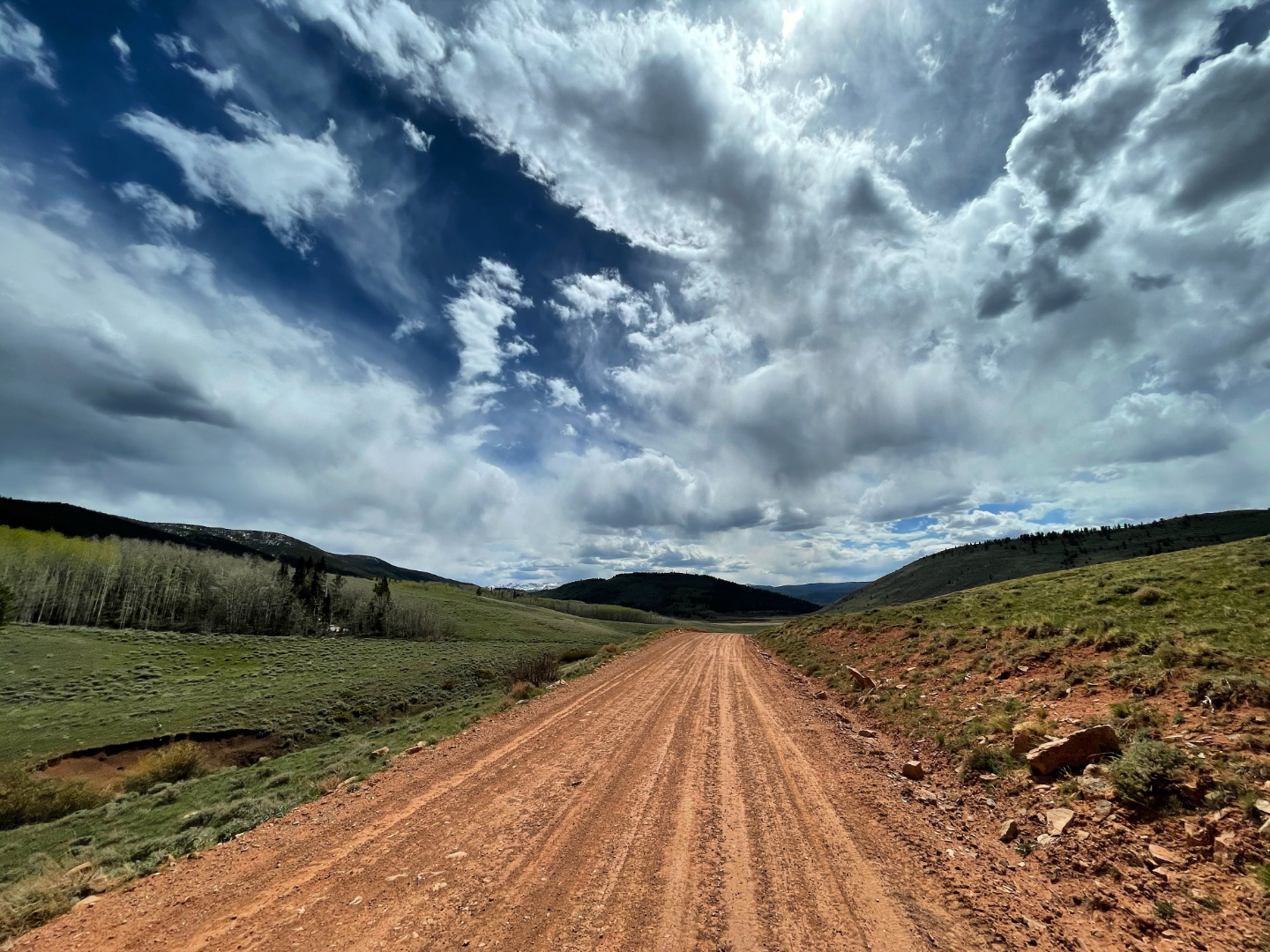 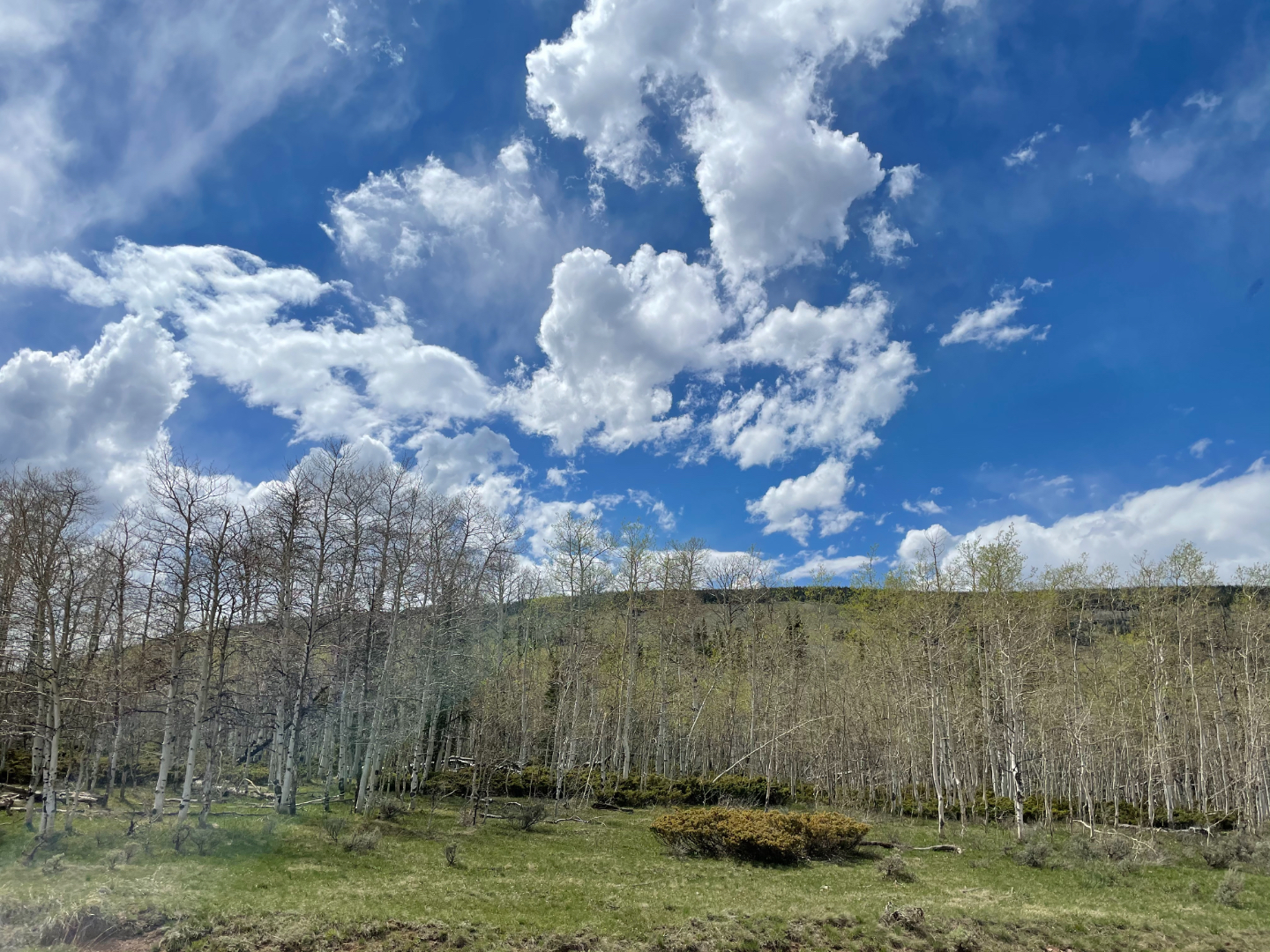 View More Images
John
Official Crew
35250
Status: Open
Visited: 05/14/2021
We took this all away to waypoint 14. There was not a lot of mud but the road was in rough shape in a few spots (still easily passable by a 2wd vehicle). There was a moose and a baby along the way which was pretty cool to see! 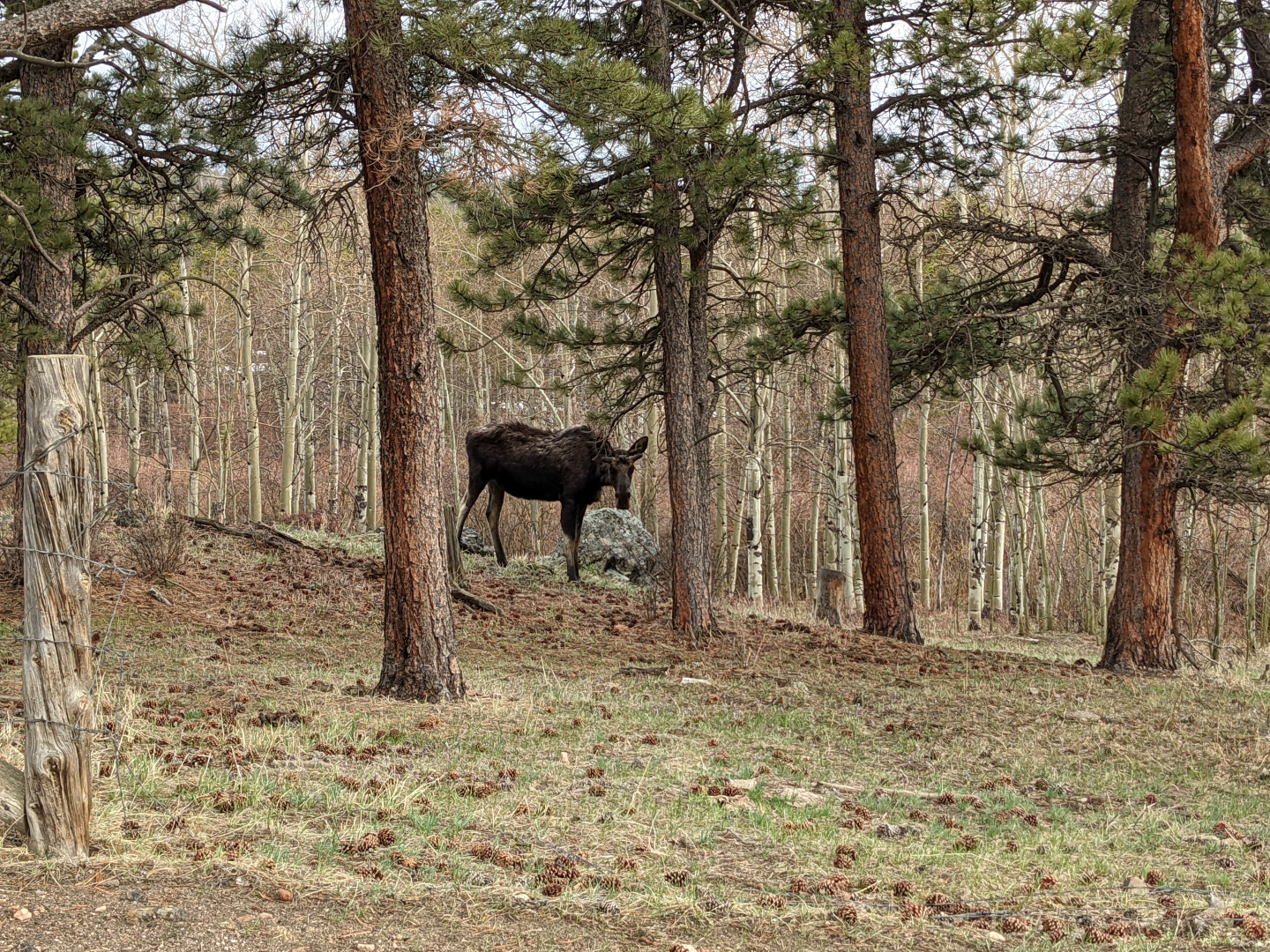 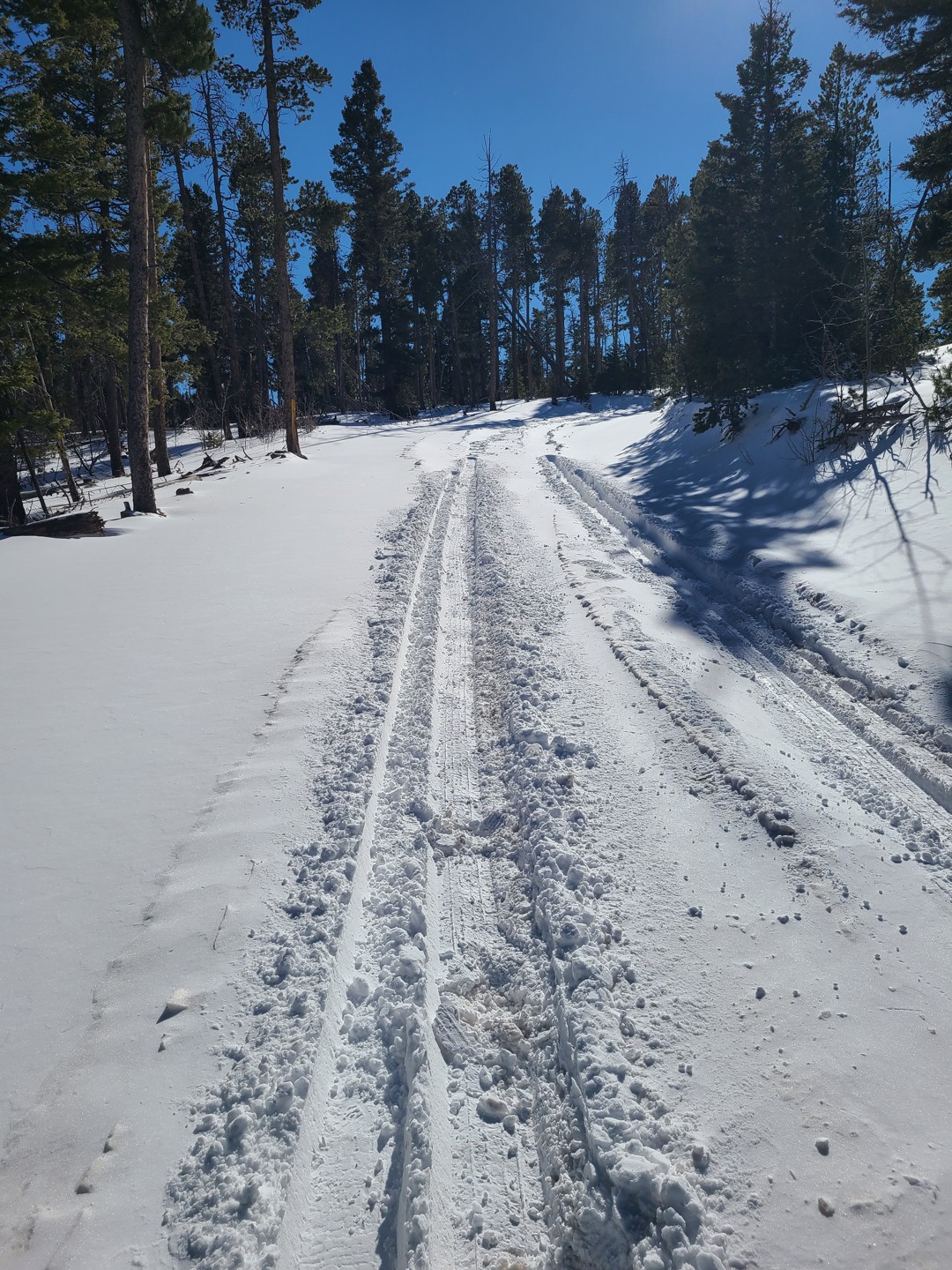 3200
Status: Open
Rated 4/5
Visited: 06/11/2020
Fun trail with some great views, nothing technical at all, basically a dirt road. A nice off the beaten path trail from others in the area though. We didn't see another sole for two days. Found some really great dispersed camping as we got closer to the Laramie River road. They were doing some maintenance on the lower section of the road towards Fort Collins and putting down some really nasty stuff on the road as we drove through. But for a less crowded experience, very nice! 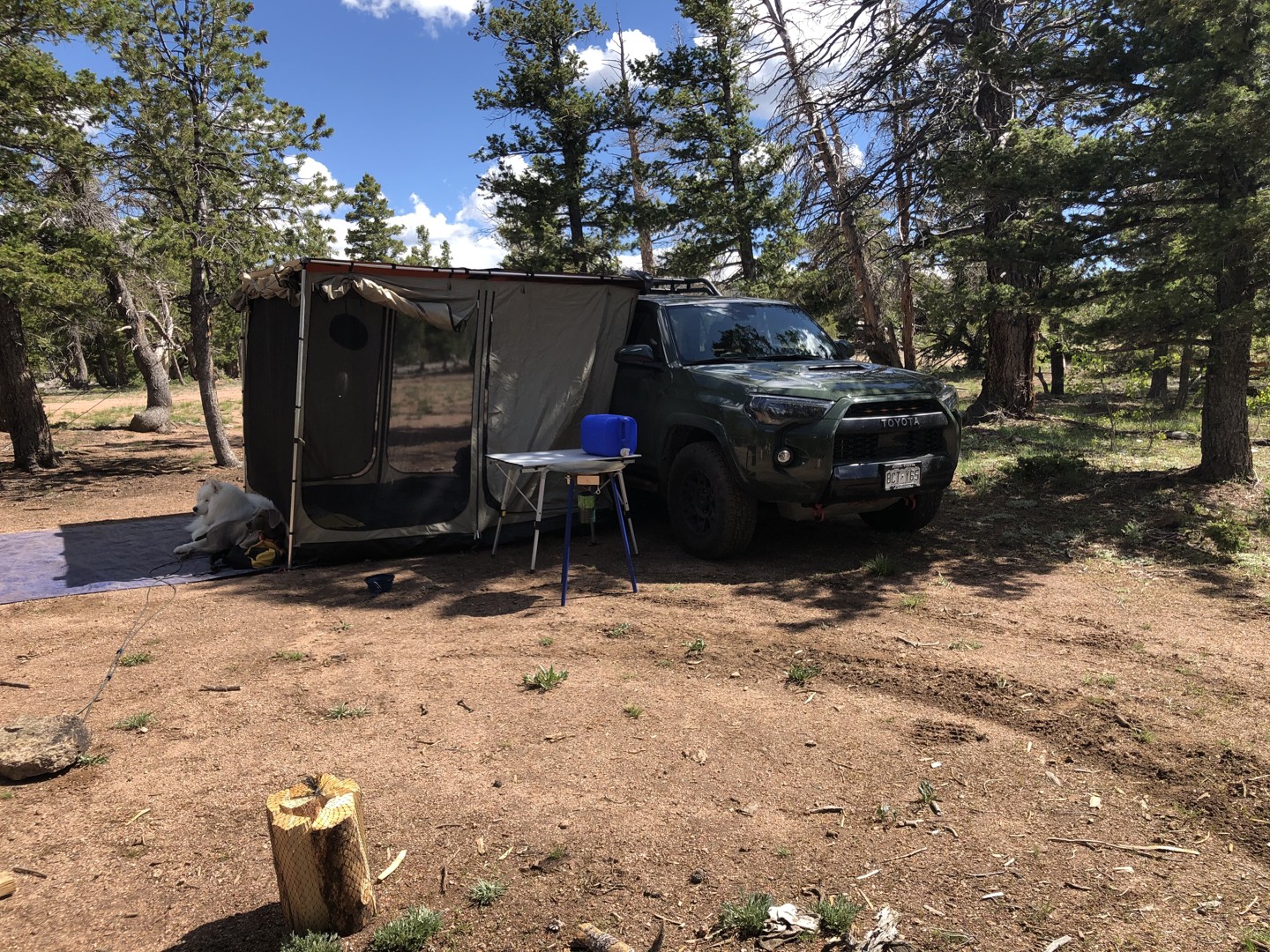 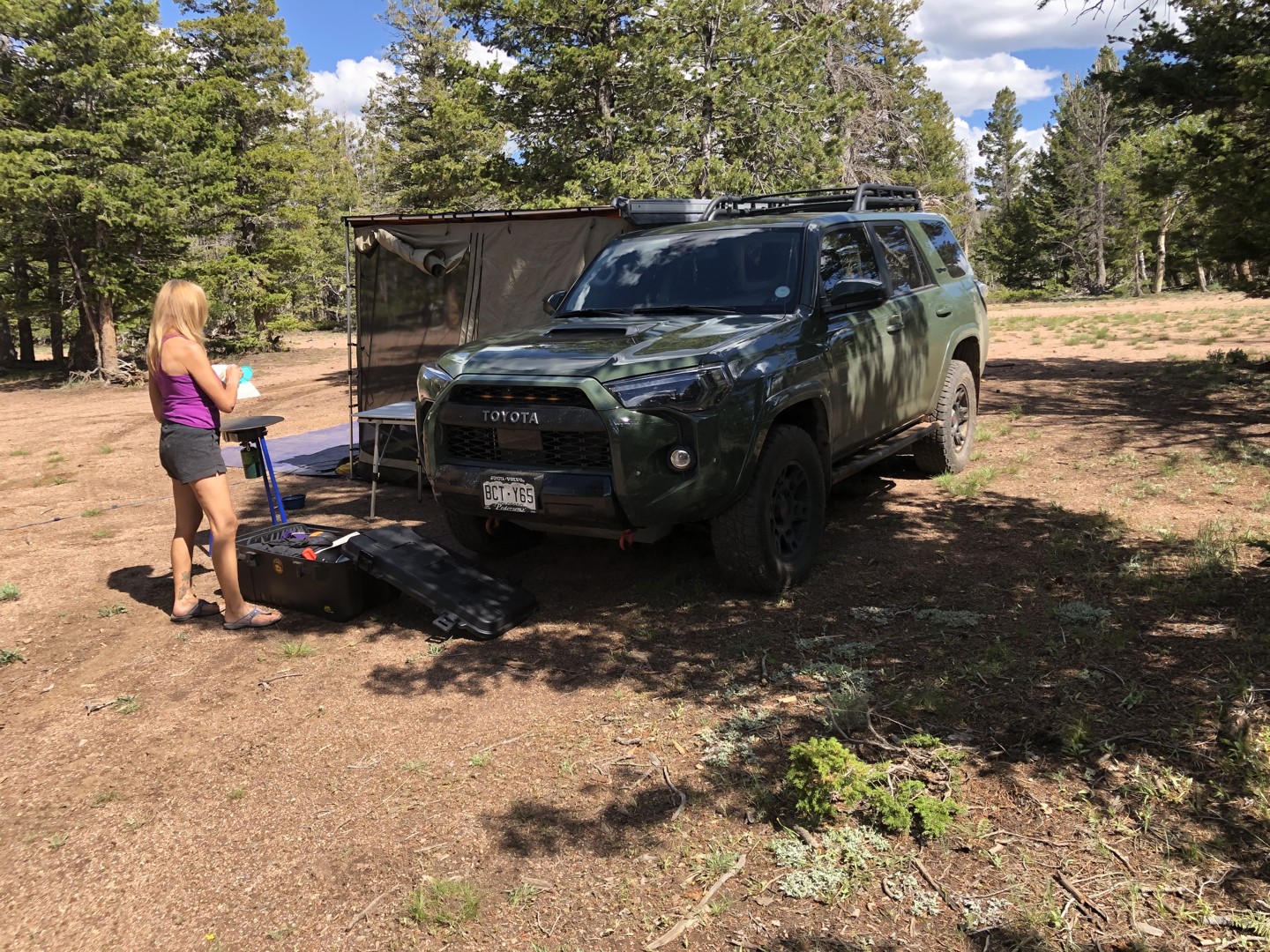 950
Status: Partially Open
Visited: 05/01/2020
drove through to way point 11 before turning on to Pratt creek road. I can't confirm the conditions past that way point because we didn't drive there, but based on the conditions of Pratt creek I would assume its completely open now with maybe a few drifts here and there towards the top. Bring a friend if you venture here soon just in case there is deep snow at the top, but I'm sure within a week it will be dry, or at least snow free, and completely open.
Anthony Leto
100
Status: Impassable
Visited: 03/07/2020
Confirmed still impassable. Although the snow has melted in places, I would not attempt this unless you are with a group until May.
Tim Palmer
Official Crew
38750
Status: Impassable
Visited: 01/29/2020
On Sunday, 01-26-20, a couple set out for an afternoon adventure on Cherokee Park Road. Just past Waypoint 17, they got their Ford Pickup stuck in a snowdrift near the old homestead ranch. There is no cell coverage in this part of the back country. No one knew where they were and they could not call for help. They spent the night in their truck, stuck in the northern Colorado Rockies. They were miles from the closest help. Eventually, one of the parties decided to walk for help while the other remained at the vehicle. But there would be another night spent in the wilderness before searchers found the vehicle. Unfortunately, the party who left on foot was not the one who summoned help and was now lost and in danger. Search and Rescue team found both parties by Tuesday. Frost bite, hypothermia, and exposure forced one of the parties to be hospitalized. Both survived the 2 night ordeal but left their vehicle abandoned on the trail. On Wednesday, members of the Mountaineers, a local Fort Collins 4x4 group, responded to the area to recover the vehicle. Despite additional snow in the area, the team was able to reach, free, and escort the vehicle back home. The trail remains impassable. 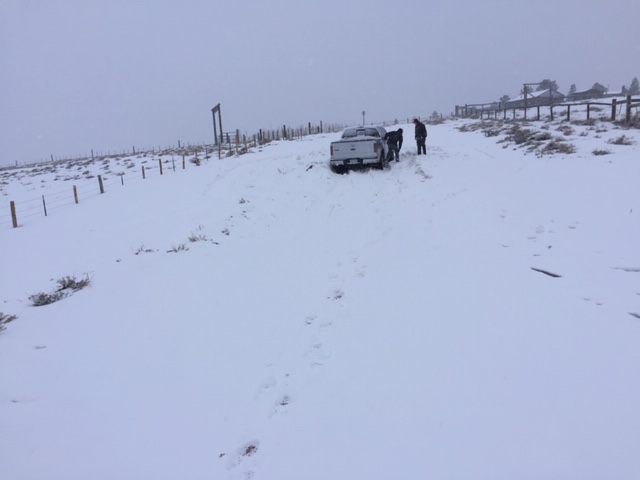 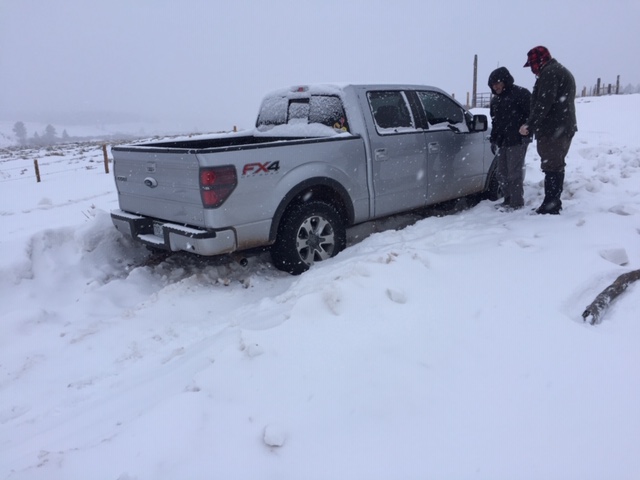 2400
Status: Open
Rated 5/5
Visited: 11/02/2019
Open and casual for the most part in winter. We tried several area trails but had to turn around due to snow. Other NFS roads were passable but just barley. Great place for spring/fall/summer.
R W
1900
Status: Open
Rated 5/5
Visited: 06/19/2019
I went on CR 80C today to get to FR 182. Road was fine with absolutely no dust and not many wash boards to report of. I will say, the intersection at CR 59 is easy to miss, be sure to veer left at that intersection. After you hit the CR 59 intersection, the road becomes significantly narrower and rougher, but is still somewhat maintained. If you run into a bind, there is an emergency call box at mile marker 16.
Tim Palmer
Official Crew
38750
Status: Open
Rated 5/5
Visited: 11/11/2018
Fresh snow fall was simply too much of a magnet to stay home over the weekend. Cherokee Park Road was first on our list for a jaunt into the mountains. The first couple dozen mile were simple snow-packed roads. The snow started to get a little deep at Waypoint 14 (Acme Creek); however, the road was easily passable for vehicle equipped for winter snowy conditions. We did pass a few trucks pulling campers off the mountain as the hunting season draws to an end and winter conditions set in.
David Main
800
Status: Open
Rated 3/5
Visited: 09/02/2018
This road goes and goes and goes! Surface was pretty good, but heavily washboarded in places, mostly further west after the county has stopped spraying the road. The scenery varies greatly from very arid, to rolling grasslands and big, beautiful ranches to forest. Great access to all of the excellent trails Roosevelt National Forest has to offer further west. Heading out to US 287, at waypoint 18, it seems easy to take the wrong turn -- if you are suddenly heading north, you know you did what I did.
Paul

6250
Status: Open
Rated 4/5
Visited: 08/11/2018
Cherokee Park is a well-maintained dirt road without much to mention as far as challenges go. We saw many crossovers, and even small cars like a VW Beetle on the main Cherokee Park Road outlined by the GPX files given on this website. The scenery is great, especially on the West end of the road. There is some gnarly washboard in a few of the uphill places between waypoints 1 and 3, but since the road is maintained, the washboard may be fixed by time you drive it. Instead of sticking straight to the dirt road, we aired down and took a hand full of turnoffs and adventured some of the small offshoots that are not outlined by the map. One such offshoot is Halligan Reservoir and Cherokee Run at way-point #4. I would definitely recommend this turnoff if you want a bit of a challenge. I had 32" tires, about 3" lift on my Frontier and made it over all the obstacles with no issue. We had to stack a couple rocks in 1 spot for the stock 3rd gen 4Runner on about 30" tires, although taking an easier line would have been possible. The rocks and whoops were a fun challenge to navigate and many of the obstacles have multiple lines to take, so have fun. By taking all the side routes, we made a longer trip of it and had a much better time than just simply driving the road. 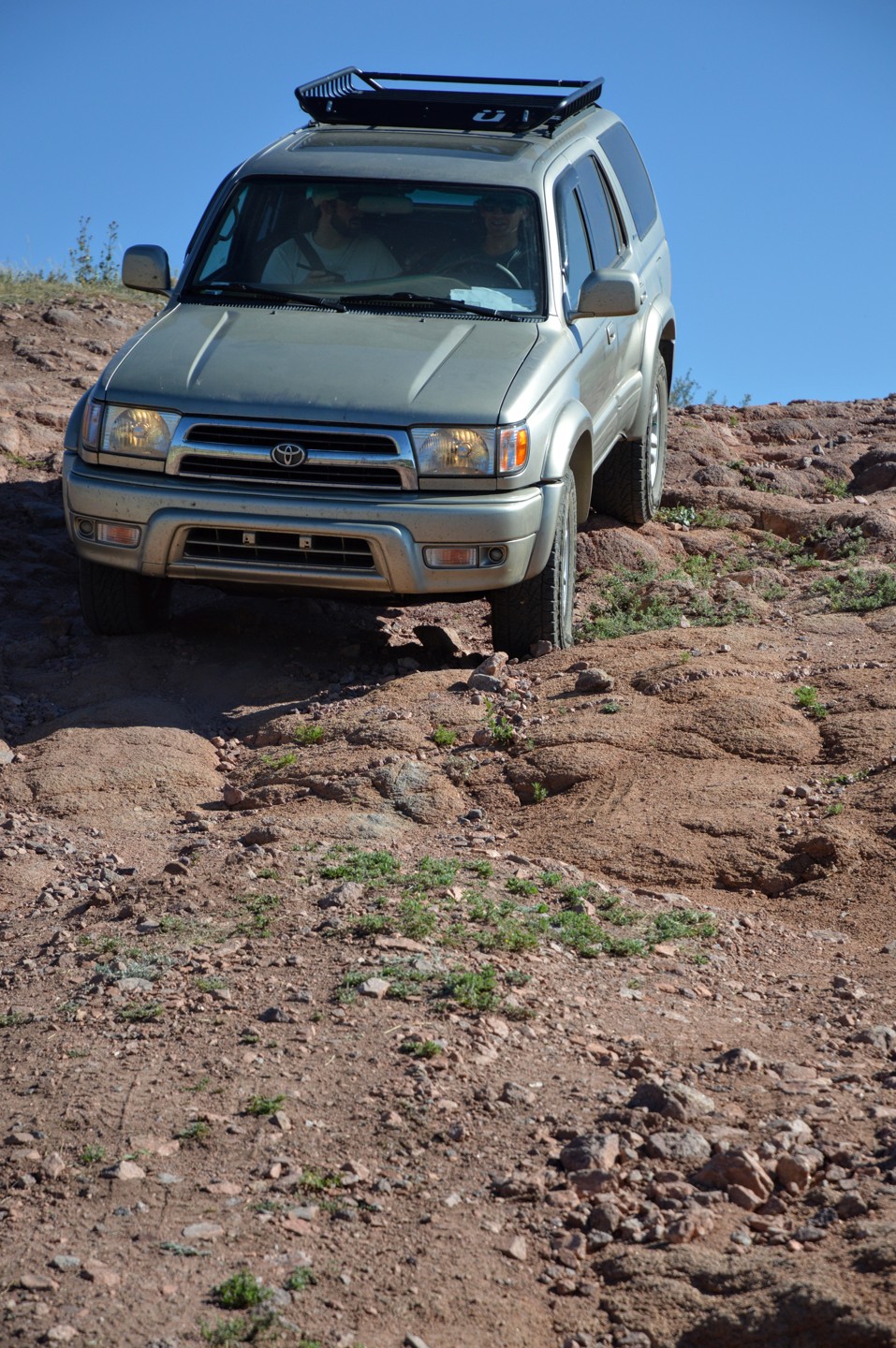 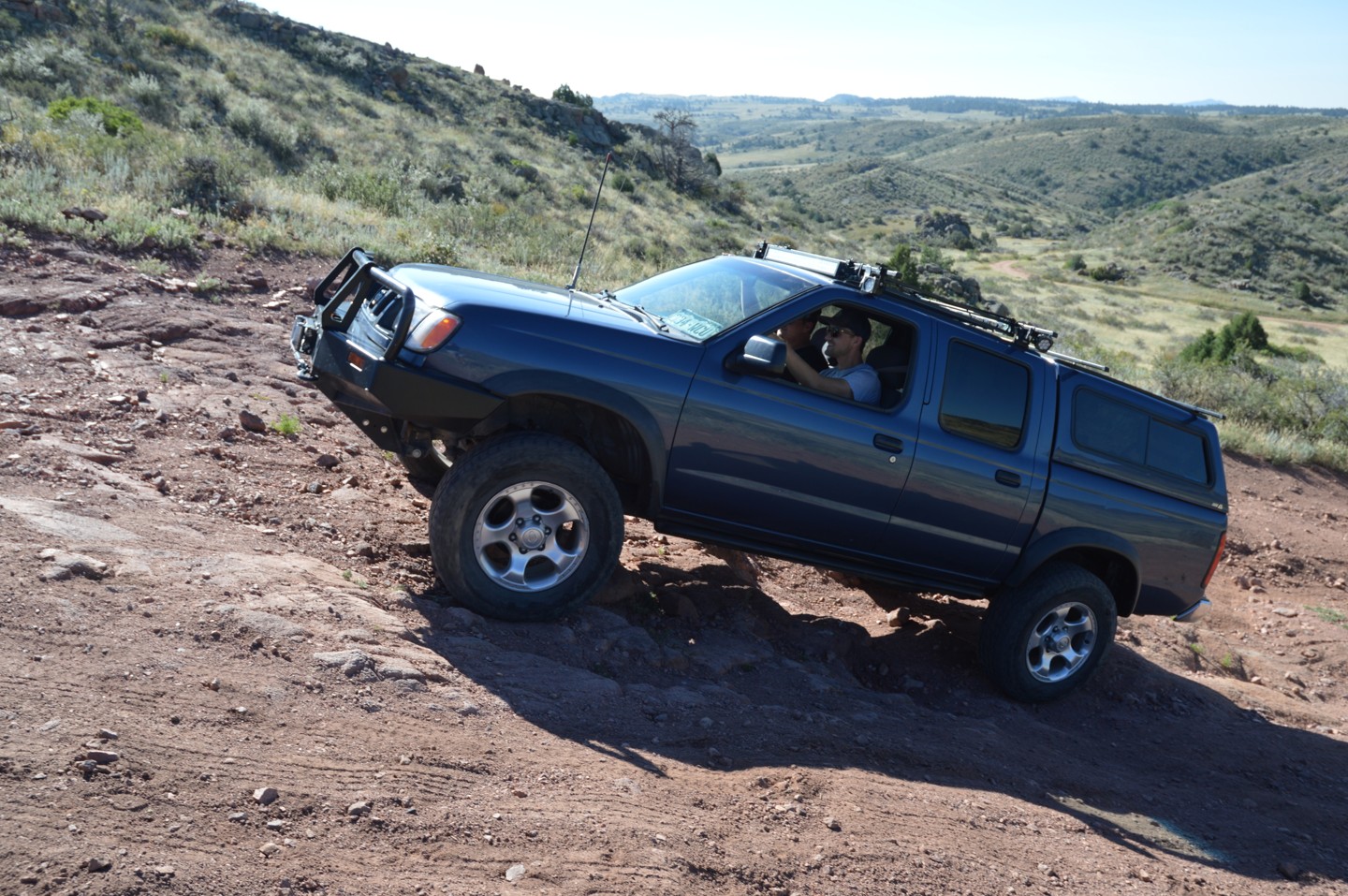 View More Images
Tim Palmer
Official Crew
38750
Status: Open
Rated 3/5
Visited: 06/14/2018
With the Badger Creek forest fire burning near Woods Landing, Wyoming, a little trip across Cherokee Park Road seemed in order to determine the road and forest conditions in north central Colorado. Cherokee Park road was in great shape. The first 11 miles of the road was freshly graded with magnesium chloride applied to the road surface to mitigate dust. It works pretty well. Although some Roosevelt National Forest areas remain closed because of the fire, Cherokee Park Road is open. Near the Sand Creek Pass area, you can look northwest and see the billowing smoke from the fire. The fire is some 10-12 miles north of Cherokee Park Road and so far not in danger.
Tim Palmer
Official Crew
38750
Status: Open
Visited: 01/21/2018
This has been a dry winter for the front range of the Colorado Rocky Mountains. A quick snow storm finally came through the area over night and throughout the day on Sunday January 21, 2018. About 8" of snow fell making the trip enjoyable. At waypoint 8 we continued north on County Road 59 which ends up at Tie Siding, Wyoming. As we approached the Wyoming State line, the wind caused a bit of drifting which made finding the road difficult at times. If the winds persist, drifts could make the road impassible soon.

Mapping Crew - Colorado and South Dakota
Bradley and Rhea are currently living in the quaint little town of Fairburn, South Dakota with their two daughters, Riley and Dakota, and their dog Nyx. Bradley was raised in Northern Colorado, while Rhea was raised in the Black Hills of South Dakota. Growing up in these environments, the mountains are where they like to spend their free time. Since meeting in July 2011, they have been fishing, camping, and wheeling together ever since. For the Mikkelson family, owning a Jeep is essential to the mountaineering lifestyle. They currently have three Jeeps, a built 1995 Jeep Cherokee, A mildly built 2000 Jeep Grand Cherokee, and a bone-stock 1996 Jeep Grand Cherokee. As a volunteer wildland firefighter, TrailsOffroad mapping crew and avid nature lovers, the Mikkelson's strongly encourage responsible trail usage, respect for our forests, always stay the trail, pack out what you pack in, and enjoy the adventure!
Visit Profile