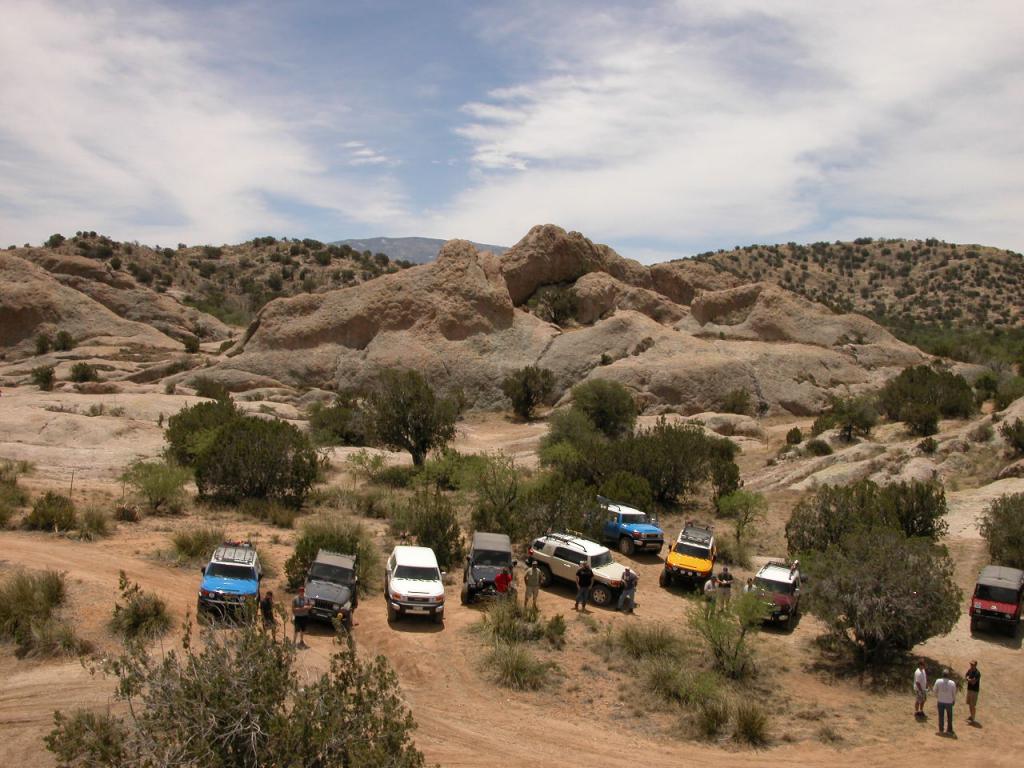 This trail has about all the kinds of four wheeling that Southern Arizona has to offer. Vehicles will encounter high desert oak scrubland, deep washes, rocky climbs, deep V washouts, route finding challenges, woodlands, waterholes, boulder crawls, crazy gates and many points of interest along the way.

Part of it can be accomplished in a 2 wheel drive vehicle with good ground clearance, but to do the entire trail you should count on needing some rock rails, skid plates, and capable driving skills. Arizona pinstripes are guaranteed on this trail as the wash is choked with bushes that will reach out and put these little badges of honor on the side of your rig. But above all of this, the scenery of the eastern Catalina Mountain foothills and the astounding geology make this one of the classic Tucson area trails.

A large triangular intersection marks the spot of the Trailhead and connection to Belotta Ranch Rd. FR#36. Turn left (north). This section is easy (though bumpy) road that is suitable for almost any vehicle. You will travel down into the oak-covered hillsides and wash bottoms that might be a little tricky during rainy times.

Trailhead Coordinates: 32.307102, -110.605432
Generally, folks that want to run trails in Redington Pass stop at the Circle K at 11271 E Tanque Verde Rd. There is a large dirt area there to air down (recommended if you value your kidneys) or fill up on gas/snacks before heading into the pass. It's only a few miles to dirt from here. Take Tanque Verde Road east out of Tucson. Follow Tanque Verde Road until it becomes Redington Road (mile 0.0) and continue east. Redington Road enters the Coronado National Forest where the pavement meets the dirt at (mile 3.0). From this point continue on Redington Road to about (mile 11.5), just a little ways past the Alhambra Staging area finds you at a triangle intersection with Forest Service Road 36 (Belotta Ranch Rd) on the left. This is the western entrance to the series of Forest Roads known as "Chimney Rock Trail".

This trail is currently reopened after the Burro fire that scorched its entirety. An Arizona State Land Recreational Permit is required to travel through State trust Land. There is a very small portion of this trail (less than a half a mile) on the east end that runs through State Trust Land, : An Arizona State Land Recreation Permit can be obtained here Open roads are designated on the Santa Catalina district motor vehicle use map. The Friends of Redington Pass have been working with the US Forest Service to assure that this resource is managed and available for all use groups.
More Information

Ran this trail today gong east to west in a stock (AKA no lift) 2021 JLU on 33" tires. Scraped her belly a few times, but other than that she ran great. It is a beautiful trail with a lot of obstacles. I wish we had been able to run it before the fire, I bet it was even more beautiful. I will post a video as soon as I can get it edited and uploaded to YouTube.
The USFS has issued a "Trail Open" memo effective 09/21/2020.
The Forest Manager, Kerwin Dewberry advised that the forest will be closed until November 2020.

The Coronado National Forest has closed this trail as it could be in the path of the Big Horn Fire. Here is the closure order and map. The road is labeled as FR 4438 on the map.

Read More
I moved to Arizona in 1984 and bought my first offroad vehicle the next year. I had lots of adventures, seeking out the Old West on paper topo maps in my Toyota FJ40 and can say, fortunately, that I never had to walk home. In 2005 I saw the prototype for the FJ Cruiser, and in the middle of my FJ40 resto project, someone came into my garage with cash and bought it out from under me. (Some regrets) In 2008, I flew out to LA to pick up my FJ Cruiser, special ordered with the Offroad Package (Locker) and MT6. My area of operations has been Southern Arizona, from the New Mexico to California borders. I have been an active member of AZFJ.org where I'm the top post contributor, and have many trail reviews posted there that I plan on enhancing, revisiting and documenting for this authoritative source. I have a login to Ih8Mud and fjcruiserforums but don't lurk there very much. in my career, I've had the pleasure of traveling in Canada, the Caribbean, and Australia but never had the opportunity to wheel there. (bucket list). But, I hope my 30 years of Southern Arizona discovery, teaching and leading people into the backcountry will finally benefit a wider audience here on Trailsoffroad. There's nothing I enjoy more than finding a historic site, a little-used trail that had significance or the opportunity to take that one photo that defines what we do. (I stink but I'm willing to learn). Oh..Added benefit...I'm the GIS analyst for a fire dept and as such have some skills in ArcGIS.
For individual use only, not to be shared.