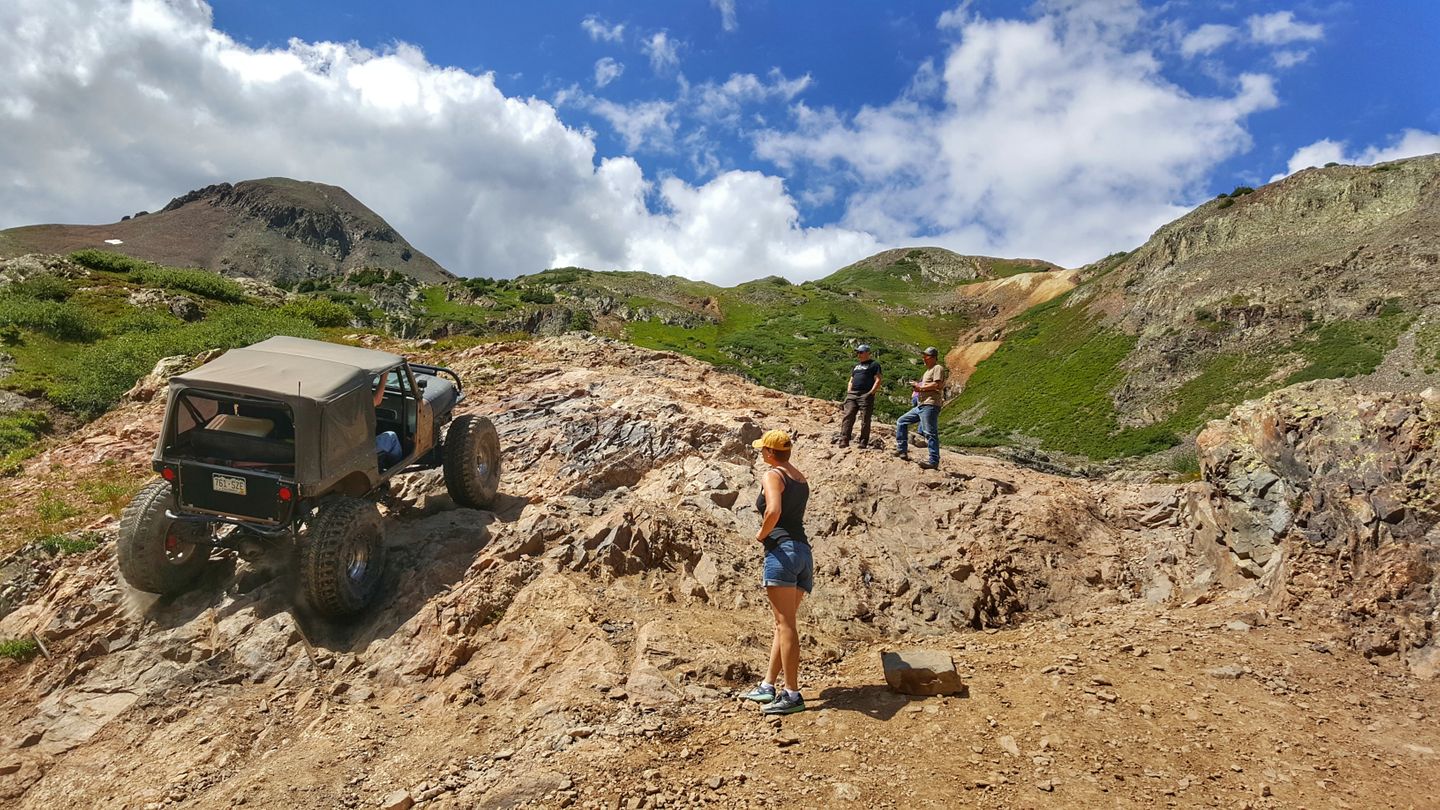 Traveled primarily for its difficulty rather than its mining history, this 4wd trail is the hardest trail in the Ouray, Silverton, Lake City area. Although difficult, this Jeep trail offers spectacular views along the way as it parallels the Uncompahgre River to its source at the jaw-dropping blue water of Lake Como. Known for its one major obstacle, "The Wall", this trail will not disappoint if you are looking for an adrenaline rush of steep climbs and teeth-jarring boulders.

The northern trailhead starts 2.5 miles in, off of Engineer Pass. There are some great camping spots right at the start of the trail here. There are also some fantastic waterfalls to explore.

Trailhead Coordinates: 37.966939, -107.627184
From Ouray: From 3rd Street & Main, drive south on US-550 for 3.9 miles turning left onto Engineer Pass. Follow Engineer Pass for 2.5 miles where the trailhead will start on your right at a tight turn. The trail is very well marked. From Animas Fork: Travel west 4.2 miles over California Gulch. The trail starts on your right at a 3-way intersection, just before Lake Como. The trail is very well marked.

Knocked this out as we hit the Jeep badge of honor trails. Excellent views for this mild trail.
This is the most technical trail in the Ouray area. If you avoid "The Wall" this trail would not be difficult for many 4x4 vehicles. Rock protection would be good to have, but if you're careful you might not even need it. The Wall is a fun obstacle that is surprisingly slick. It isn't grippy sandstone like found in Moab. On my visit some Jeeps made it up without even spinning a tire, others, including me had a bit of a time, but made it. Being on the right line is critical. Don't be afraid of doing Poughkeepsie, it is not a severe trail.
We got started early and made it to the wall without any traffic, passed a lot of campers at the beginning of the trail. The lake was crowded with SXS, what would you expect on a Saturday. We had a great time great time and I actually made it up the wall without any assistance (unlike Wheeler Lake), I would suggest going up the far right side. Definitely doing this one again.
Awesome trail that is a must-do. Ran into traffic at the hill so went around, had the RTT anyways.
6th time to the area, first on this trail. Had a blast. My winch got to stretch its legs on the wall. Can't wait to come back and so glad it's open again.
This trail is open......Not sure where some people get there info. still snow at the top
Ran Poughkeepsie on a rainy day, the trail is not difficult, the wall was pretty slick and I was not able to make it up due to the rain and didn't have a spotter with me so I didn't push my luck. I will hit it again next year when I have a spotter with me. The wall isn't that bad as long as you pick the right line.
From the USDA Forest Service:
"As of July 15, 2020 Poughkeepsie - Closed Indefinitely due to people repeatedly cutting the gate locks and going off trail, causing a lot of trail damage."
On July 18th, the trail was reopened for the 2020 season thanks to the efforts of the Western Slopes 4 Wheelers. Poughkeepsie is there adopted trail and they have been working for 2 summers to clear the trail of avalanche debris and resource damage done in early 2019. Gates on both the BLM side and the National Forest side are officially open.
The upper gate has been opened by the BLM allowing people to access Lake Como, but the middle gate and lower gate still remain closed until crews can get in and clear avalanche debris and repair resources damage. The wall obstacle is still not accessible as it is below the middle gate. (See photo)
This trail is still closed due to avalanche debris. We were able to enjoy views of Lake Como. It’s unbelievably beautiful!
Per the Forest Service and BLM, Poughkeepsie is still closed due to avalanche debris.
The varied terrain with a few difficult obstacles make this a fun trail.
I drove Poughkeepsie Gulch in my 1988 Isuzu Trooper with my friend who drives a modified and well equipped Lexus LX450. Knowing the Wall would be improbable (even in dry conditions) I gave it a go because I knew my wingman could strap/winch me over. Had no issues on the approach because my track is narrow and I was able to slip between rocks that the LX was crawling over (in a sluice near Waypoint 6, and the large boulder immediately below the Wall). The first attempt was center-right, then I tried center-left; I stacked a rock in the crevice and damn near made it but couldn't maintain momentum across. I backed off and then tried the "V" notch on the right. After a couple of wheel spins, I took the winchline and we went on to Lake Como and then over the pass to Animas Forks.
My review isn't worth much, as I was coming from Animas Forks to California Pass then did a stop over dowm into Lake Como for a picnic and made it to the Wall Bypass only before heading back to cross Hurricane then head out on Corkscrew to Ironton. That said, what little I saw was epic. Lake Comp is beyond breathtaking. The grade heading doesn't from California to the Lakeshore is intense, but nothing low range and engine breaking can't cover. While I can't speak to the technical sections from the Engineer /Mineral Creek side, the Lake Como side is worth all of the effort to get there.
This is a nice trail , I wasn’t in it to rock crawl so took the bypasses around the obstacles , lake Como and the waterfalls were the highlight of the trip for me. You should be fine in about any 4wd with decent ground clearance