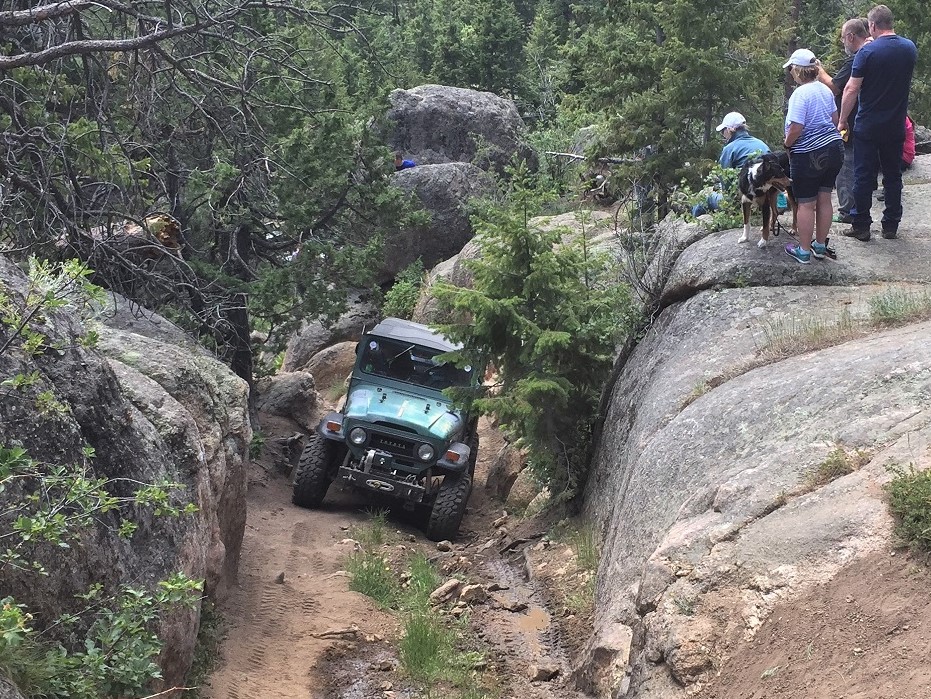 Rough and rugged, Kelly Flats 4x4 Road is one of the more difficult trails in northern Colorado. Just west of the narrows in the Poudre Canyon, Kelly Flats is the only 4x4 trail that intersects directly with the Poudre Canyon Highway. The drive to the trailhead through the Poudre Canyon is stunning and breath-taking. Two distinct obstacles highlight this road: Heart Attack Hill and The Chutes. Both obstacles have bypasses, but even the bypass for Heart Attack Hill, known as Aneurysm Hill, can be difficult. Kelly Flats 4x4 Road can be unnerving for beginning off-road drivers and the optional obstacles can be difficult and challenging for experienced drivers with modified rigs. Put your transfer case in low range and enjoy this popular trail.

The slope on Heartattack Hill, Waypoint 4, approaches 60 degrees. This route also boasts numerous areas with loose rocks near 24". The Chutes at Waypoint 7 has rocks and ledges that are about 4' tall. The Chutes are an optional obstacle.

Kelly Flats 4x4 Road is a mixture of rock and dirt surfaces. The hill climbs on Heart Attack Hill and Aneurysm Hill are littered with large loose rocks and traction can be difficult. Heart Attack Hill can be difficult during ideal conditions and downright dangerous when wet. It is steep and lifting one tire off the ground on occasion can be expected. There have been roll-over crashes on Heart Attack Hill and extreme caution is advised. After reaching the top of the hill climbs, Kelly Flats 4x4 Road crosses through private property. Please respect the owner’s property rights by remaining on the road and driving at a reasonable speed. Past the private property lies the short, but extreme obstacle known as The Chutes. This is a route for modified rigs and off-road driving experience. Vehicle damage is likely here. The rest of the trail is a mixture of dirt two-track and occasional rock. Keep a keen eye out for elk and moose while in the forested area as they are often spotted.
This trail crosses private property in several locations. Please remain on the trail to preserve private property rights.

A large parking area greets you at the trailhead. Many off-roaders trailer their rigs and there is room at the trailhead for pull through parking. The parking lot can accommodate large 4x4 groups and is a great place to air down and prep for the rocky trail. Be prepared, this route gets rocky immediately past the Forest Service gate.

A few hundred yards up the trail you are presented with the first obstacle. It’s a gate keeper for the trail. If you are uncomfortable and feel like this first obstacle is too much, the remainder of the trail will only get worse. This obstacle, however, can be negotiated with a stock vehicle in low range with little difficulty.

As you approach Heart Attack Hill, you can clearly see that the area is wide open, steep, and rocky. There are some areas of solid rock and other areas of a loose dirt and rock mixture. As you proceed up Heart Attack Hill, you will notice that the trail offers several line options, none of which are easy. This is a dangerous hill and a mistake that leads to a roll-over can end in serious tragedy. Confidence is a must here and experience is highly recommended. Although this trail can be run in either direction, it is not recommended that you take this option down hill. Those traveling uphill will have the right-of-way.

Although this is the bypass to Heart Attack Hill, don’t be fooled as this is a difficult route as well. This route starts as a hilly, dirt trail that ends in a rocky steep climb. You have already made it through Waypoint 2, the Gate Keeper Rocky Start, and this option is no more difficult. It is just a long rocky climb to the top. Once at the top, stay to the right. The Heart Attack Hill route intersects from the left. The two options rejoin and continue as a single trail again. Near the start of Aneurysm Hill, there are several dispersed camping opportunities off of the main trail to the east. The area is moderately forested which should allow you to find an ideal camping hide-a-way.

Veer to the left. There is private property and several houses along the trail. These houses have a private gated access road from the north. The private road is well marked. This part of the trail is a well-maintained gravel road. Please respect the local homeowner’s private property rights and drive in a cautious, respectful manner.

The Chutes is an alternate route that takes off to the left side of the road. This obstacle is only about 200 yards long and is a rock climb best suited for modified vehicles. The bypass on the right ends up at the top of The Chutes and offers some parking for those who wish to get out and watch as others ascent this obstacle.

Another rocky area awaits you on the second half of the trail. The rocks here are mostly solid and straight forward as you begin the gradual descent downhill. This is the last of the significant obstacles on the trail.

The final leg of the trail proceeds through the forest and an occasional meadow. Moose are abundant in this area and chances are that you can catch a glimpse of this giant creature. The trail ends at the Manhattan Road (County Road 69). A turn to the left (south) will take you back to the Poudre Canyon at the little community of Rustic. A turn to the right will lead you to the Red Feathers Lake Road and the Red Feathers Lake Village.

Head north on Highway 287 about 10 miles west of Fort Collins. Head west on Colorado Highway 14, the Poudre Canyon Highway, and travel about 25 miles. Kelly Flats 4x4 Road begins on the north side of the road at mile marker 97.

Dispersed camping is available throughout the Roosevelt National Forest and Kelly Flats offers ample opportunity. Be aware of the private property along the trail to make sure you are using the National Forest for your adventure. If a more formal camping location is your desire, established US Forest Service campgrounds are abundant throughout the Poudre Canyon. In fact, the campground across the highway from the trailhead is known as the Kelly Flats Campground. This campground is first come first served and sees heavy use during the summer months. During hot, dry summer months, the Roosevelt National Forest often times has a fire restriction or fire ban in place which would prohibit open camp fires in dispersed camping locations. Know before you go. 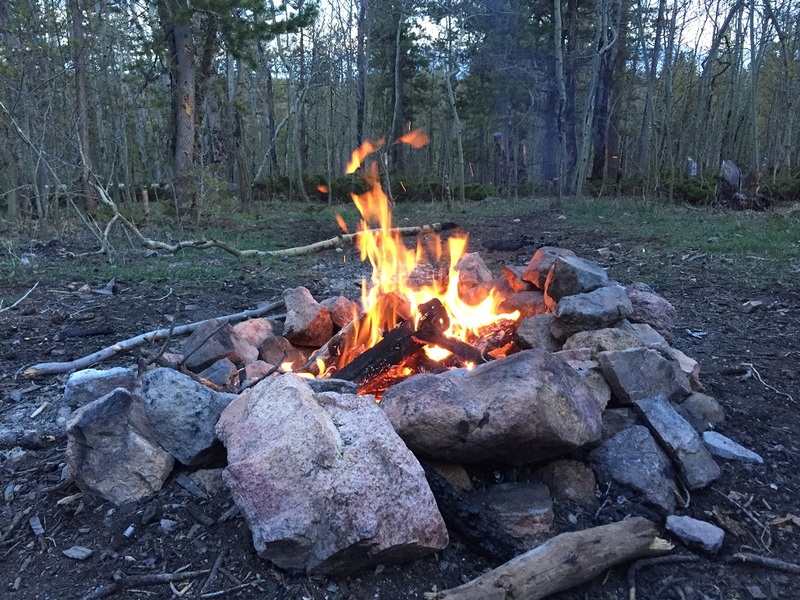 Read More
Tim lives and works in Northern Colorado. He has owned and driven 4X4 vehicles his entire adult life including Jeeps, pick ups, ATVs and UTVs. After high school, Tim's first 4X4 was a 47 Willy's CJ-2A with a flat 4 and a 6-volt electrical system. Typically wheeling in Northern Colorado or Southern Wyoming, Tim loves being in the mountains and the back country. Because of a desire to enjoy and promote responsible off-roading and to keep it available for the future, he belongs to a local 4X4 off-road club. Being part of the Trailsoffroad.com community furthers that goal as well. A love for off-road adventures, camping, fishing, and hunting keeps Tim away from pavement and always exploring. While his wife likes the comfort of a Jeep Grand Cherokee, Tim prefers the ruggedness of the Jeep Wrangler. Although most off-road time is spent in Colorado and Wyoming, an occasional trip to the Moab area is common. Tim will spend the summer going topless and enjoying the value of the great outdoors. Amateur Radio Technician license call sign: ke0npg
For individual use only, not to be shared.