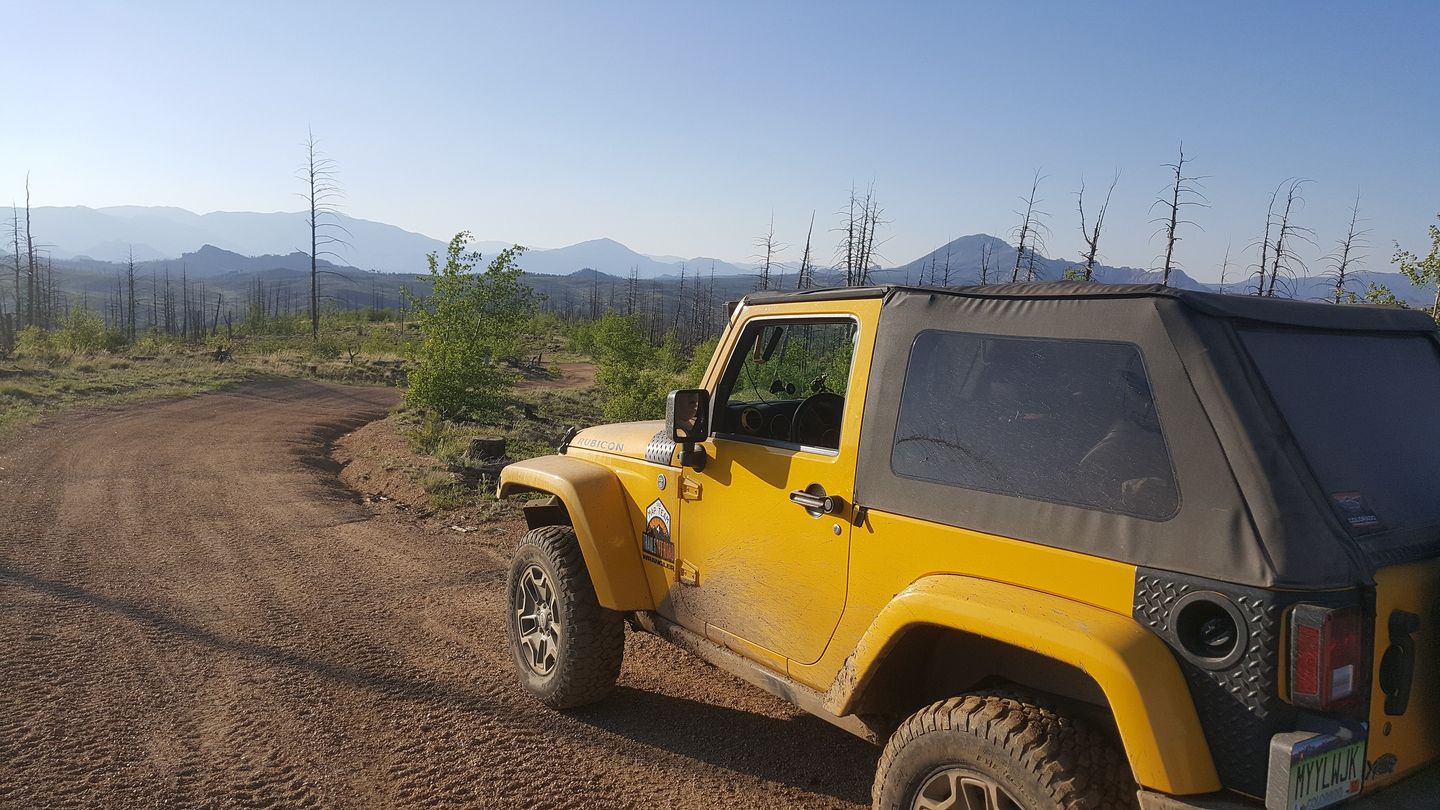 Manchester Off-Road Trail is situated in Pike National Forest. It provides you with scenic views of Manchester Creek with plenty of photo opportunities along the way. As a stark reminder to always pay attention to forest fire danger, this trail starts off in a lush forested area and ends in the burn area of the infamous Hayman Burn which scorched over 138,000 acres in 2002. The area burned so hot that nothing grew for many years and it's just now starting to show signs of the forest coming back. This growth means that over the next several years, you can expect that nearly every time you go out, the views on this trail will change.

Coming in from the south, take a left at the intersection of Manchester Creek (FS 364) & Rule Ridge (FS 357) at the sign to start the trail.

Head north on Manchester Creek Road (Don't let this street name confuse you, it changes into the trail and its name). After 4.4 Miles of housing, the road turns into forest and it becomes Rule Ridge. Follow Rule Ridge (FS 357) to Waypoint 17 and turn left at the sign to get on the trail.

This area is part of Pike-San Isabel National Forest, and as such is part of the 2011 Lawsuit where a coalition of conservation and recreation groups were suing the U.S. Forest Service over what they say is an illegal addition of 500 miles of motorized roads and trails. A settlement was reached in late 2015 that is requiring the U.S. Forest Service to re-evaluate the roads and create a new travel management plan. 30 roads have been partially or completely closed while this evaluation takes place over the next few years. Those trails affected have been noted here at trailsoffroad.com. It is imperative that the OHV community makes their voices be heard on this issue. If we do nothing, those 500 miles will be shut down, some already have. Contact the local ranger districts and let them know why the area is important to you and the history you have there. Contact your Congressperson and Senator as well. They know how important the OHV community is to the economy of the state.
More Information

Camped near WP 5 for two nights. Found a good spot that was not right on the road. Expect OHV traffic (no where near the amount on Rule!) and random gunfire from others target shooting. Would camp here again.
Crossed over from Phantom to Rule Ridge. Traffic was much lighter and easy drive. Stopped by the creek for a little lunch before carrying on.
Trail is reported closed beyond waypoint 12 due to the wash out. Please respect respect closure signs.
This trail is open, however, CAUTION. Colorado weather is unpredictable this time of year and there may be the occasional fresh snow fall or mud and melting snow. This trail is in an area of the state where snowfall levels have dropped for the season and the majority of the trails are dry, muddy and/or only have a small bit of snow on them. Again, please use caution if traveling on these trails until the dryer season.
This trail is located at a higher alitude of Colorado and at this time of year should be considered impassable for any regular off-road user. Some people may be able to manage these trails with the correct gear, emergency equipment, and rig. Travel with caution.
Drove this one several times over multiple days from the west side (CR 3) to the intersection of Rule Ridge (357). It is a dense forest on the south/east side and clear (burn area) on the west side of 362/366 intersection. The area got 3-4 inches of fresh snow on December 13. Once again this year, my local Toyota club supported the USFS Pikes Peak Ranger District (PPRD) and their annual Christmas Tree cutting event. We patrol the forest roads in the designated cutting area, report road conditions, and extract "stuck" vehicles if someone asks for help. The designated area this year was north Divide, where Rule Ridge (357) was the east boundary, Spring Creek (CR 3) was the west boundary, and CO 78 (Painted Rocks Road) was the north boundary. For three consecutive weekends (November 28-29, December 5-6, and December 12-13) we had club volunteers patrolling these Forest Roads. I was present each day (except December 5) and drove almost every road in this area (I drove all for which Trails Offroad has published a guide, except the southern end of Grouse Road/354).
We were out in the area to get out of the house and check on trails in the area. There are no major changes to the trail to report at this time. There was a significant amount of small vehicle traffic all day.
Beautiful day today on this trail. A lot of dirt bikes and ATV's.... needed to be careful not to get in accident. May be crowded due to Covid 19? People need to get away. ....Saw 2 Moose on Trail Creek Road! Didn't know you guys had them down here! Easy enough trail for my Tundra.
Trail is technically opened, but we could only complete 8 of the 10 miles on this trail. We traveled north to south. We bogged down and had to use our recovery gear at the intersection of FS 362 and 364. Snow was easily 20-24" deep and Toyota Tundra was too heavy to get thru it. We also ran into deep snow once you past the house on the private property as the trail was not maintained after that. Plenty of ATVs and side by sides running it, but our heavy vehicles struggled in spots.
We ran Manchester while checking on trails in the area. The was a lot of ATV and Motorcycle traffic there today. This one is totally dry and there are no major changes to report on the trail.
Trail remains in good shape and doesn't have much snow. The creek has frozen but is broken near the northern end of the trail. We made it through with a lift and big tires rather than turn around. Note, there is private property on this trail and we encountered more than just the signs on this trip. There were children on the road near the house and when we slowed down to make sure they were moving, two dogs rushed the Jeep, barking, baring teeth and growling. One dog jumped at my window at least once before the owner got them to finally back off. We will be filing a complaint and I fear what would have happened if I had no doors on the Jeep. Be careful when traveling this section of trail.
We ended our day traveling through Manchester Creek trail. The sun going down provided some great pictures and amazing views. The trail was dry all the way through.