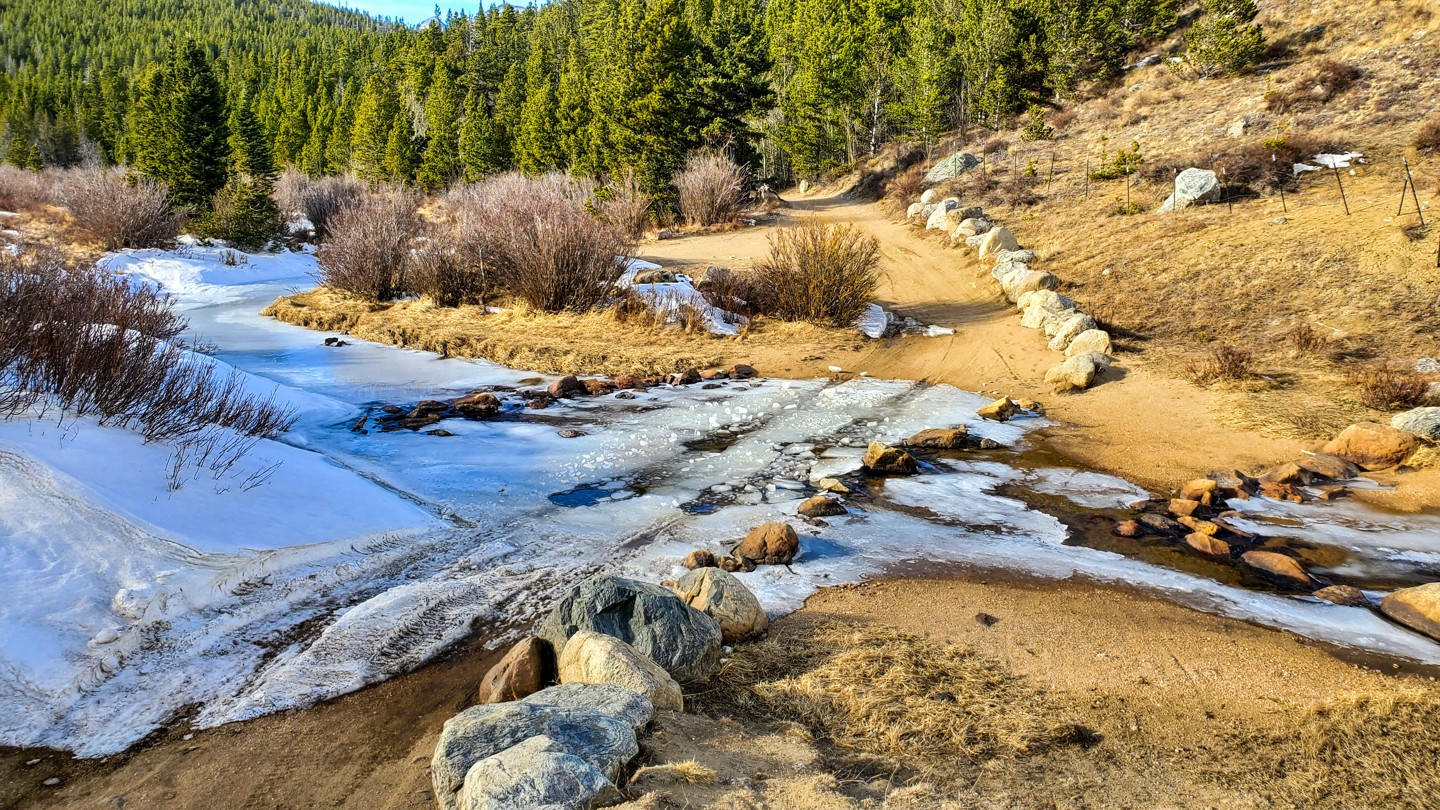 Known as "The place where winds were born," Caribou was the site of Colorado's first major silver rush. In the 1870s, miners from all over the world flocked here and developed the town of Caribou. An estimated eight million dollars worth of silver was extracted from these hills before the mine closed in 1884. Caribou suffered two major fires - in September 1879, from which it was rebuilt, and again in 1899 when most of the downtown area was destroyed. It was not rebuilt the second time. By 1880 the population dwindled to 549; by 1900, only 44 remained. The trail starts at the Historic Caribou Townsite that only has a few building foundations remaining. On the north end, mud can make this historic trail an impassable adventure at times, go prepared.

The northern section of Caribou Creek starts at a very large parking area off of Caribou Road, where you can find the remenants of the old Caribou Townsite. Follow signs for 128 northeast as the narrow trail drops down into the trees. The southern portion of Caribou Creek is the trail to the northwest, also marked as FSR128J. Campsites 1-5 can be found along that section of road.

Take Canyon Boulevard, also known as highway 119, from Boulder west to Nederland. As you enter town you come to a roundabout. Take the first exit in the roundabout, which is Highway 72. You quickly come to a large sweeping right turn. 3/4 of the way through that turn, make a left on Caribou Road. Follow this for 2.5 miles, through a switchback, and come to a 4-way intersection. Turn left at the 4-way and stay on Caribou Road. Follow the road for another 2.8 miles until reaching the trailhead for 505 on your right.

We had not been up to Caribou Creek in a few years, so Calvary 4-Wheelers headed that way on Saturday, August 4, 2018. We had three rigs along for the run: me in my lifted XJ, Karen in her stock JK and Rich and Jon in their lifted XJ. We started from the Rainbow Lakes end and bumped our way down to cross Caribou Creek. The muddy section just south of the creek was not too bad and we all made it through with no trouble. Some of the perpetual puddles have started eroding into small mud pits but all were passable.

Just passed the muddy section we met a Subaru coming down from Caribou. He asked if this was the way to Rainbow Lakes. We told him yes, but do you know what you are getting into? He didn’t and, after a little description, he decided it would be a good time to turn around.

We took a little side trip up Pomeroy Mountain (505.2A) to the Pandora Mine and found a very scenic overlook and some interesting old mining equipment. I found it amusing that the miners apparently shopped at Harbor Freight as the old compressor had “Chicago Pneumatic Tool Company” forged on its side.

After our detour, we continued up to Caribou for lunch and to check out the old ruins. When we had finished lunch, we continued onto the Eldorado Mountain section of the trail and took it over to Eldora. We had one somewhat close call on our way down to Eldora. In the middle of the narrow shelf road an overly aggressive dirt bike came flying around a blind corner at about 20 mph. Fortunately, it was at one of the few wider sections and he had just enough room to skirt by me on the drop-off side. If I had been another 100 feet down the trail he probably would have been a hood ornament or gone off the side.

The weather was beautiful with sunshine to partly cloudy in the morning and temperatures in the mid to upper 70s. It clouded up after lunch and we got a few light sprinkles off and on but no heavy rain.
Ran from south to north in a stock 3rd gen Tacoma. Little hairy in a few muddy spots but got through without any damage.
Ran Caribou on 8/26/17. 2 stock 3rd gen 4Runners (one with a locker, one without). 3-5 rating is pretty accurate due to inclines getting muddy and the very narrow section in Eldora. A couple spots offered some nice 3 wheel action and 1 - 1.5 feet water. Scenery is gorgeous! There was some disagreement as to which end to start at as we ran in to 1 vehicle starting from Eldora (he had to reverse dow to let 5 down). The narrow section down into Eldora has NOWHERE to turn around or back up if you are going down hill. It would be nice to have a sign to tell people where to start. We ran from Nederland to Eldora and it was awesome until the traffic jam. Camping: there are designated, dispersed camping spots (beautiful ones).
A great trail for fall colors. It was a pretty easy ride for the most part on an ATV, but we haven’t been back since 2015 because we felt like there were a lot of fist-sized rocks that kinda jumbled and beat us up with the constant bumble once we dropped into the trees on the other side.