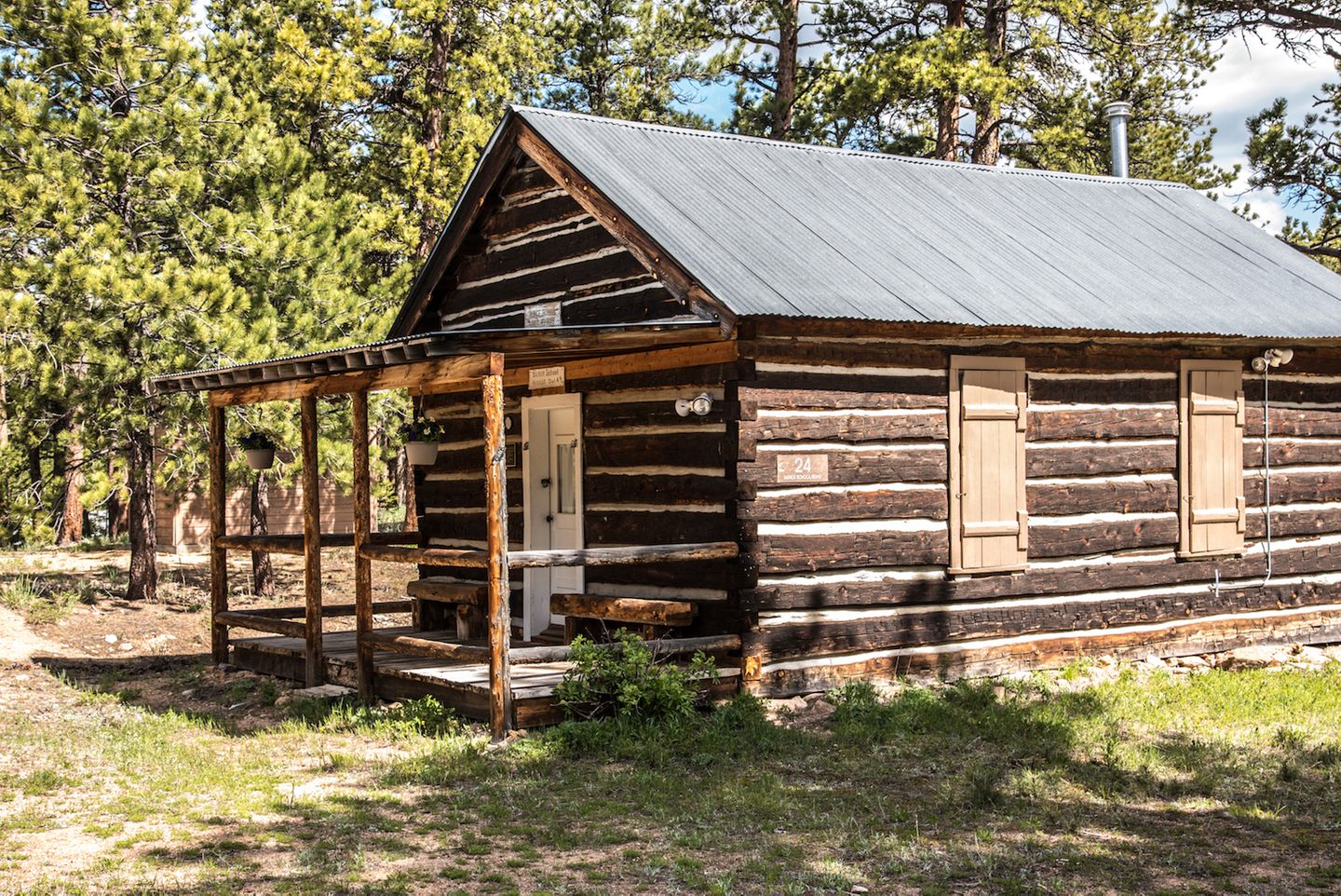 Located in the northern Front Range, west of Lyons, Bunce School Road is a popular trail because of its close proximity to town along with the availability of dispersed camping. While dispersed camp spots may get filled quickly in the peak summer months, there are a lot of other trails in the area to explore. This trail is also a popular place for winter wheeling as the snow does not get extremely deep between snow storms and does not present any dangerous situations such as shelf roads or off-camber drop offs. Only the last mile of trail is seasonally closed, making this off-road trail highly traveled by not only 4wd vehicles, but also small OHV users such as ATVs, Side by Sides, and motorbikes. A little history about Bunce School Road. In 1888, Joseph Henry Bunce built the first area school, which is still known as the Bunce School and still exists today.

The difficulty of this trail is very dependant on how far you travel, and what time of year you travel it. The north end of the trail to the seasonal gate is relatively easy throughout but does have a few steep sections with loose dirt and protruding rocks, hence the low end 2 rating. Vehicles with low clearance will need to choose their lines wisely. From the seasonal gate south, the trail is by far the most difficult stretch of trail and has significantly larger rocks than anything seen on the north side. This is where the high end 4 rating applies. Expect some rock rash to your undercarriage if you are not running larger tires.

Bunce School Road is an extremely busy and heavily trafficked trail nearly year-round. This trail is best traveled from north to south starting at the historic Bunce School. The first 4 miles of road surface is well packed dirt and gravel with some small sections of exposed rock. You are likely to pass through many shallow water holes if there has been any kind of moisture. The trail passes several campsites and a few trail spurs including the popular Ironclads trail, before it hits a seasonal gate at mile marker 4.14. If the seasonal gate is open, you can continue down the last mile of the trail where you will pass Park Creek and the popular T-33 Plane Crash trail. This last mile of road is the most difficult section of Bunce School Road as you make your way downhill over large, round, river rock boulders making your progression much slower than it had been up to this point. Eventually, you find yourself in Peacefully Valley where there are a couple of great campgrounds. This is a great trail to check your vehicle's capabilities, and good for new off-roading as well as experienced off roaders. Most of the trail is easy with a few moderate spots with rocks and mud holes. Overall this is a great trail that is close to town.
Extremely popular for rental OHVs such as side by sides.

The northern trailhead begins on the south side of Highway 7, between mile marks 18 and 19. Look for signs on the highway that state "point of Interest". There is a small parking area directly at the turn that can be used for a couple of trailers or as an air down spot for multiple vehicles. As soon as yu start the trail, directly across from the fire station you will see the historic Bunce Schoolhouse. Constructed in 1888, the schoolhouse is one of only two log rural schoolhouses remaining in the county.

Located here is a very large parking area ideal for large groups to air down. Be prepared for many trailers to be here, including those of rental OHV companies. A short walk up the road is an informational sign for the area.

Stay left at this intersection. Here there is an informational kiosk with area information, rules, and regulations. There is also a local trail map that notes Forest Service and private property boundaries. The road to the right is a short spur that passes some private cabins and returns to the school house.

Down off the road is a large area for camping. This spot is very large and can accommodate a number of vehicles. The ground is pretty level with a lot of sand/gravel, but not much vegetation. There are a lot of good-sized trees for hammocks also.

Stay right and continue down the higher road. Downhill to the left is FSR 217 that has a few spurs off of it before it dumps you out onto Highway 72, the Peak to Peak Highway.

Off the trail to the south is a short spur that leads to a nice campsite that overlooks the drainage farther south. This spot is medium in size, good for a few vehicles. Please note that after this, there are two small stretches where the trail passes private property on both sides of the road, and dispersed camping is not allowed. Refer to the Roosevelt NF - Boulder Ranger District (North Half) MVUM map for dispersed camping specifics.

One of the few obstacles along the trail, this rocky section is easily navigated with some slight off-camberness.

Stay right at this Y intersection. FSR 213 is on your left and heads west a short ways to a couple of potential campsites and eventually dead-ends at a private property gate. *Dispersed camping is once again allowed along the road here, until waypoint 10.

To your right, tucked off the road is the last dispersed camping opportunity before the seasonal gate. This spot is ideal for vehicle or hammock camping as the ground is extremely rocky and not very level. * Note that beyond this point, dispersed camping is not allowed for the next mile.

Stay right at this unknown road and follow the trail southwest as it treks along the edge of a scenic meadow.

The seasonal gate here closes the last mile of the trail winter through spring (11/15-6/15) depending on snow conditions. There is a large turnaround just before the gate for those traveling the road during this closure. *Note that dispersed camping is once again allowed

Stay left to continue down 105. To the right is FSR 202, the Park Creek trail. This turn will also take you to the T-33 Plane Crash Trail. Both trails are more difficult than the current trail you are on. From this point forward till the end, the trail gets much rockier with a lot of large river rocks peppering the trail.

The trail ends in Peaceful Valley, near Camp Dick campground. Turn left and head east to connect with Highway 72. Turn right to pass through Camp Dick and begin the Middle St Vrain trail.

From the Longmont, head west on Hwy 66 into Lyons, CO. Once you get into Lyons turn left at the west edge of town onto Highway 7 and continue west. Approximately 1/4 mile past Highway 72 there will be a "Point-of-Interest" sign pointing to the left. The "Point-of-Interest" is Bunce School Road which is the start of the trail. From Estes Park, take Highway 7 south through Allenspark. Before you get to the turn for Highway 72 you will see a sign for a "Point-of-interest" a brown sign with arrows. This point of interest is the Bunce School Road where the trail starts. 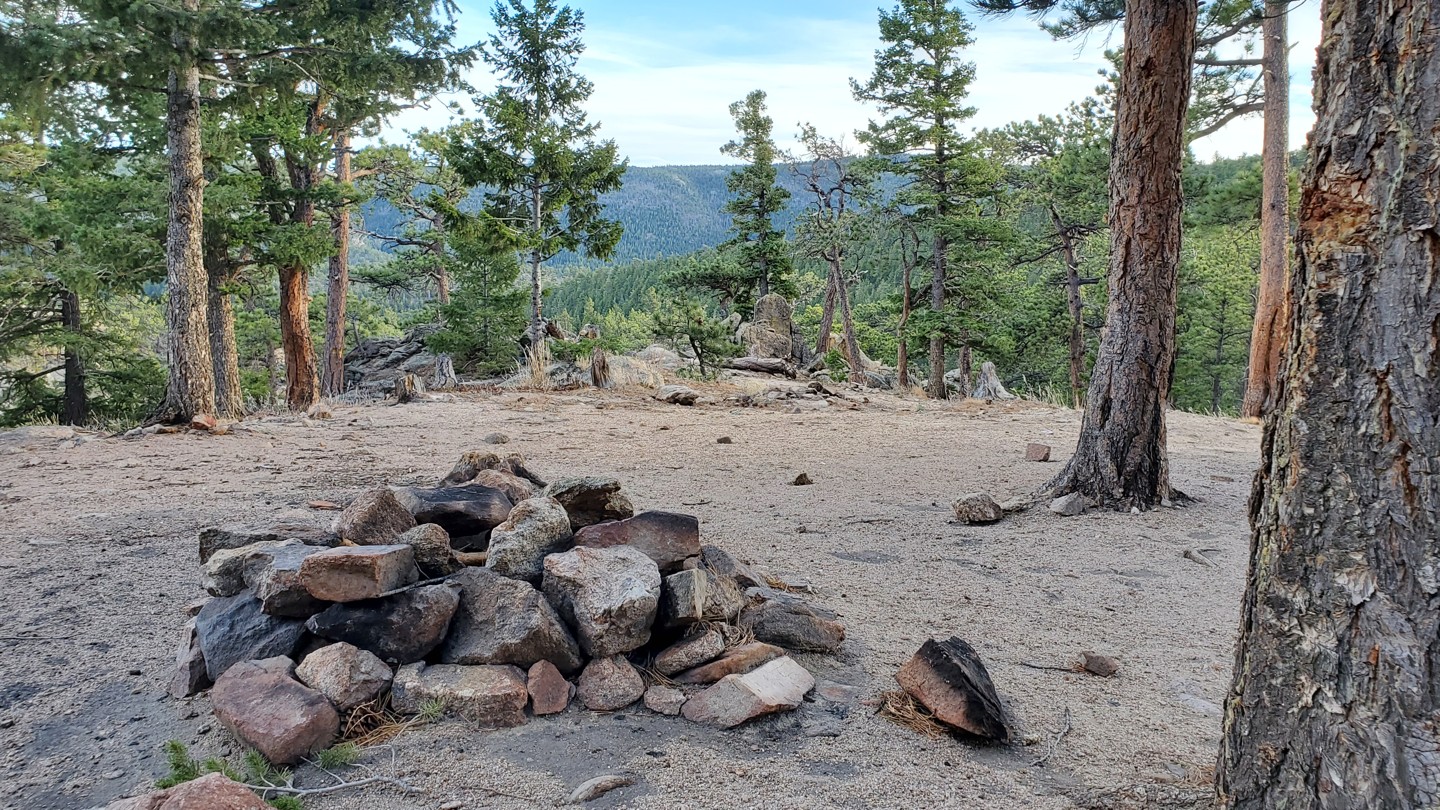 Q: Has anybody been down this trail recently? If so how where the conditions. Was it a busy trail? Considering the good ole Quarantine is this trail head packed? Thanks
–Zachery (04/02/2020)
Q: Is it reasonable to start Bunce FSR 105 from the Camp Dick side. When I exited at Camp Dick I didn’t see anyone starting the trail from there. I imagine the initial climb would be significant. Thank you.
–Michael Cohan (07/22/2018)
A: Yes, you can. It can be run in either direction. I run it almost always from the Camp Dick side.
–Todd (07/23/2018)