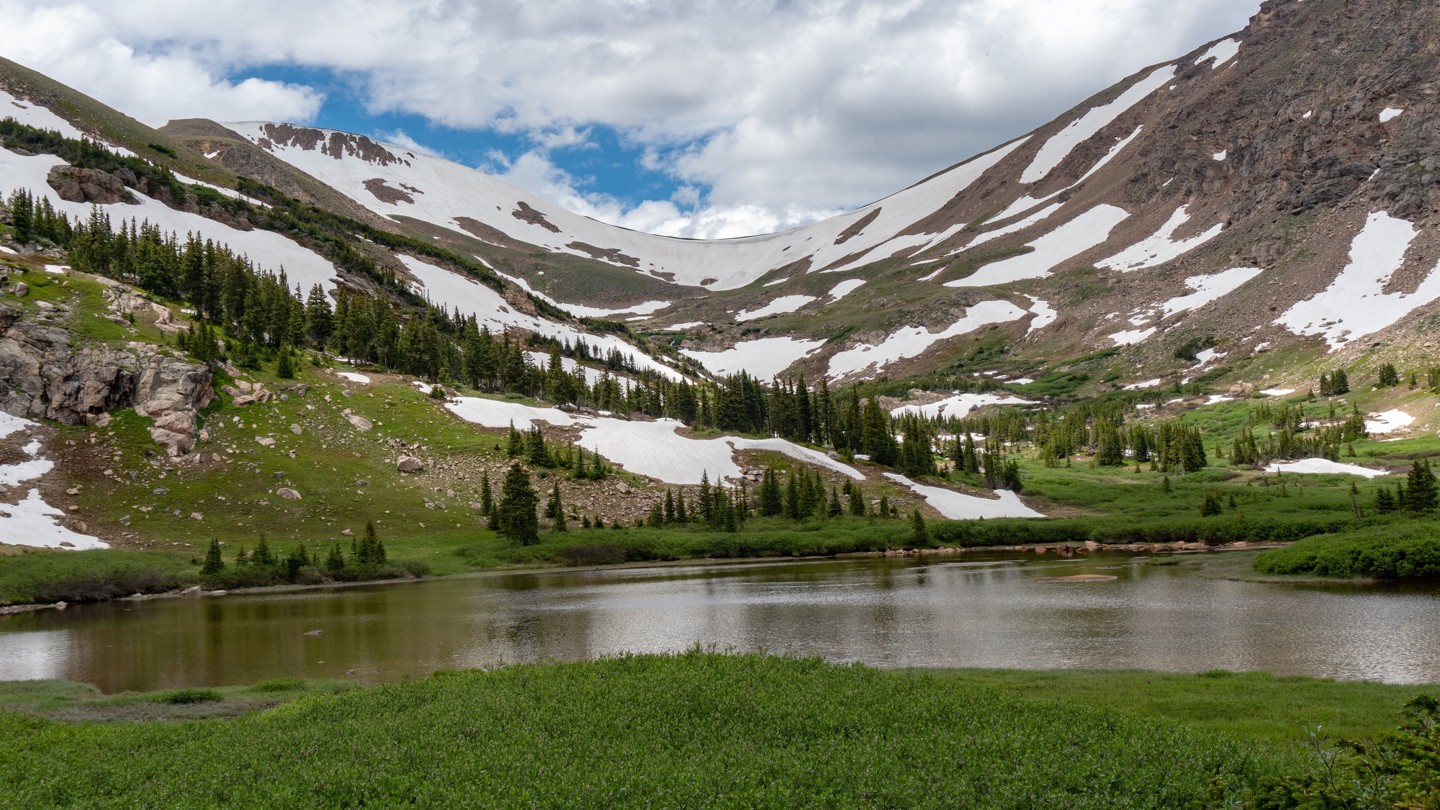 About 1 hour from Denver, Colorado and situated within the Arapahoe National Forest the Bill Moore Lake 4X4 Road is one of the trails in the Empire Loop, a network of trails just above Empire, Colorado. Offering amazing alpine scenery and fun hill climbs for both the novice and seasoned, this trail is a must do.

From waypoint 2-4 the undulating terrain will keep most lower ground clearance vehicles from continuing. In between waypoint 17-18 is where the larger rocks are, which shift from year to year requiring higher clearance and possibly 4 low.

The Bill Moore Lake Trail is part of the Empire 4X4 Loop. The road follows County Road 251 for the first few miles before it joins Forest Service Road 183.1. 95% of the trail has passing areas except at the very end when you climb down into Bill Moore Lake. It starts within a more wooded area along Country Road 251 which is filled with whoop-de-dos and washouts. Once you pass the Conqueror Mine it follows a shelf road before one last narrow switch back. It finally joins with Forest Service Road 183.1 where the forest thickens before it climbs to the fringes of timberline giving way to a general alpine and open space. Once in the alpine zone there are plenty of moderately steep climbs with loose rock. It connects with the Mill Creek and Red Elephant Hill Loop. 4 low and high clearance recommended.

Turn right at the fence to head to the official trailhead. This is also a great location for airing down and disconnecting sway bars. The road will start climbing immediately.

Follow the switch back uphill, where you will navigate through more whoop-de-dos.

Stay straight. Years past this was more whoop-de-do and less wash out. Today its more washout so just pick and plod your way through.

Follow the switch back uphill. The Conqueror Mine was an active gold mine back in the mid to late 1800s; production from this mine helped establish the town of Empire.

Optional: You can turn uphill here for a more challenging hill climb. It does get narrow with loose rock. If you choose this optional route, turn left at the top of the hill where it meets the main trail. Stay straight: Continue straight and follow the switch back uphill. Be sure to watch for oncoming vehicles just after the next switch back, there is little to no passing area until you reach the next waypoint.

Stay right. The split ends at the same place. GPS mapping shows the lower road to be the official route.

Stay straight. If you choose to come down this way, its a good idea to send a scout down and radio up as there is no passing.

Follow the trail left uphill. There are a few different lines to take on this uphill, with the right side being the more easy.

Stay right for an easier route. Stay left for the more challenging and scenic route. The route to the left is steep with loose rock, it is a fun climb, but 4 low is recommended.

Stay straight on the main road. You will have amazing views down below from this point and also get to see the hill climb you will partake in. There are several pull outs, but keep an eye on newer drivers that may not know uphill has the right of way. The trail generally gets more rough and challenging from this point forward.

Stay left on 183.1. This road eventually dead ends with 1 or 2 dispersed camping locations and includes views to the eastern plains and Denver Metro off in the distance.

Stay straight. USFS MVUM mapping shows this road as 183.1D, but signage shows it as 183.1L

Stay straight. Shortly after this area the trail will descend into the Bill Moore Lake area. It will get narrow and slightly more challenging with few passing spots. Take caution to mind oncoming uphill trail traffic which would have the right of way.

End. There are a few dispersed camping spots which can fit vehicles. Surrounded on 3 sides by nearly sheer cliffs, the lake is framed by Breckenridge Peak to the southwest at 12,889 feet and Witter Peak to the north at 12,884 feet. There are remains of an old cabin within the parking area. Be courteous and leave everything cleaner than when you found it.

Take I-70 west to Highway 40. Go north to the town of Empire. Turn right on Main (this intersection does not have a street light). Travel approximately 1 mile just after turning on Main to the air down area.

There is dispersed camping along the trail after waypoint 10 along the trail. There is also one or two secluded areas at the end of 183.1C and a couple at Bill Moore Lake. 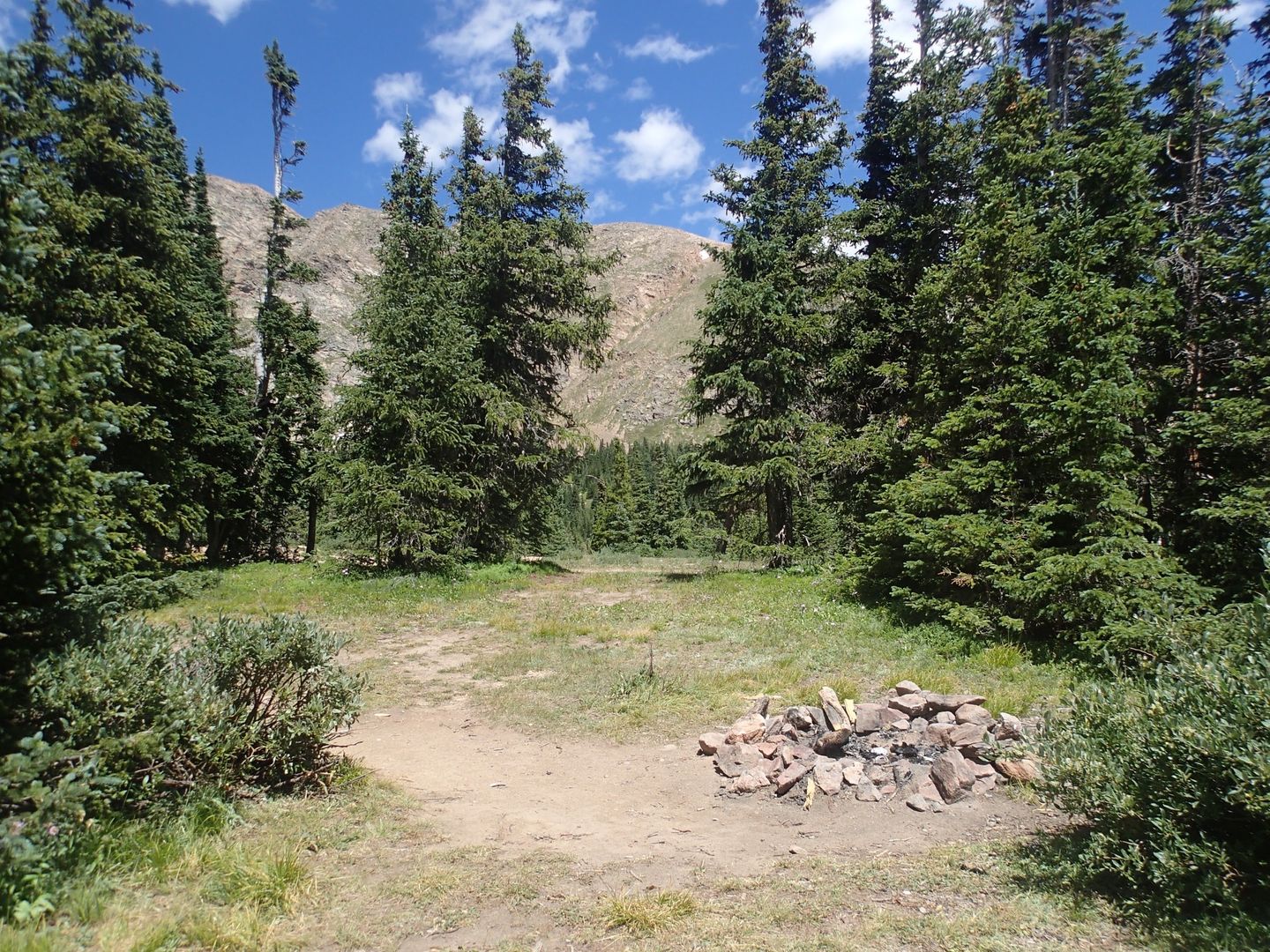 Q: Planning on heading up this weekend in 2017 Ram Rebel. Any issues getting all the way to the lake with family. No backup vehicle going with.
–Chuck M (07/03/2020)
A: I'd avoid the Chutes section at waypoint 7, but other than that you will be fine
–Ryan Boudreau (07/03/2020)
Q: Any ran this since 5/26? I know there was some snow the other day. Wondering if its open to the lake.
–Adam (06/11/2020)
A: Open all the way to the lake!! Went there 9/6/20
–Zack Mace (09/25/2020)
Q: At waypoint 16 - I leaned right (towards lake according to signage). If I had gone left at that split, is it another trail or does it just meetup with the main road a little farther? thank you
–J Ranello (09/25/2018)
A: It’s a pointless road, it just connects to the main road further up.
–Todd (09/26/2018)
A: It’s a pointless road, it just connects to the main road further up.
–Todd (09/26/2018)
Q: Hello. Are RZR permitted on this trail? Is there a good trailer parking there? Thank You
–Radek Gebala (05/26/2018)
A: Yes and yes. There is a large lot at waypoint 1 for parking. Keep in mind others need to park trailers there also, so be thoughtful where you park it. We love pics also, please a trail review/report when you get home :)
–Todd (05/26/2018)
Q: Has anyone stayed overnight here? Does it stay crowded or is it all day-trippers? I'm just Trying to find a secluded, yet drivable dispersed camping spot close to Denver for a quick getaway in the Tundra.
–logan (09/16/2017)
A: Yes, there are a few good spots by the lake, but also right around waypoint 12 or 13 there are a few good spots also.
–Todd (09/17/2017)
A: We camped here the weekend of Sept 9. Most people we ran into came for the journey, ate and then left. Pretty peaceful.
–Adam (09/17/2017)
Q: For mid July, would a stock 2016 Wrangler Sport be capable? Thanks.
–Todd (06/09/2017)
A: I noticed you asked the question for the mid-July month which is around now so here's my answer if this helps and isn't too late: I ran this trail last November with my stock Grand Cherokee and she only has about 8" of ground clearance. She came from the factory with no 4 low, no locking center diff, and open diffs front and rear. (Pretty much AWD). We still made it through the trail just fine. In fact, I'm actually headed back up with her tomorrow on this same trail coincidentally enough to show my friends that I really did take a stock soccer-mom AWD Jeep up this trail lol. Picking your lines is extremely important though on this trail. To answer your question, yes. Your wrangler will be just fine with the right driver skill set :) Have fun and be safe!
–Chris Li (07/19/2017)
A: Todd, most likely. You will need to pick your lines in a few spots. The roughest part is just before the lake and we won't know what the conditions will be until the last drifts melt.
–Todd (06/09/2017)
Q: What would you say is the minimum ground clearance needed for this trail?
–Josh Noesser (11/16/2016)
A: The trail seems to have gotten quite a bit of erosion, The previous answers seem to be from a while ago. There are some tough obstacles that might cause some problems close to the start, however if you negotiate those, you will be just fine. Clear sailing after the early ruts that seem to have deepened. Been here twice, and the first time a stock Toyota T100 Made it with some scraping, but made it nonetheless. My slightly modified Nissan Frontier made it just fine.
–Zack Mace (09/25/2020)
A: I say 8 inches of ground clearance, so long as you're really good at picking your lines on this trail and it isn't snowy, wet or slippery. This has been verified by me with my stock Jeep GC :)
–Chris Li (07/24/2017)
A: 9" ground clearance.
–Todd (11/17/2016)