Ancient Indian ruins, seclusion, and wide open panoramic views are what you get with this off-road trail just outside of Sedona, Arizona. Starting off at the Honanki Indian Heritage site, this route travels 6.5 miles through the Coconino National Forest on an old, and much less traveled ranching road. Leave the people behind and enjoy the breathtaking views of the Sedona red rocks, Mingus Mountain, and many other surrounding mountain ranges. This is a nice and easy wheeling trail with lots of great scenery, and a few small challenging rock crawls to hone your off-roading skills.

Upgrade from free to our All-Access Membership and get every detail, waypoint, photo, and more on every single trail guide.
Start a 7-Day Free Trial
EASY
to
MODERATE

Start your next adventure on Outlaw Trail

Upgrade to our All-Access Membership and get full camping details like:
Start a 7-Day Free Trial
Head West on 89A through Sedona until you reach Dry Creek Road, turn right and head North on Dry Creek Road until you reach a "T" in the road. Turn left and head West on Boynton Pass Road, continue to the next "T" and turn left (Southwest). Boynton Pass Road turns to FS-152C. Continue on FS-152C until you reach another "T" and a sign for Honanki Ruins. Turn Right at the "T" and head North on FS-525, you will immediately come upon a "Y" in the road, stay left at the "Y" and continue on FS-525/ N Loy Butte Rd. Follow this road to the Honanki Heritage site and turn left into the parking lot to begin the Outlaw Trail.

100
Status: Open
Rated 5/5
Visited: 01/07/2023
Difficulty Accuracy: Harder
This was the first trail I've run west of the Mississippi. I'd say most of the trail fits the 2 category, but the beginning (assuming you start at the ruins on the north side) has some tricky spots as well as waypoint 12. There is no bypass on waypoint 12 anymore. I drove with a 2 door jk with 35" tires. No lockers were needed. Beautiful views, and a challenging enough trail for a newbie. 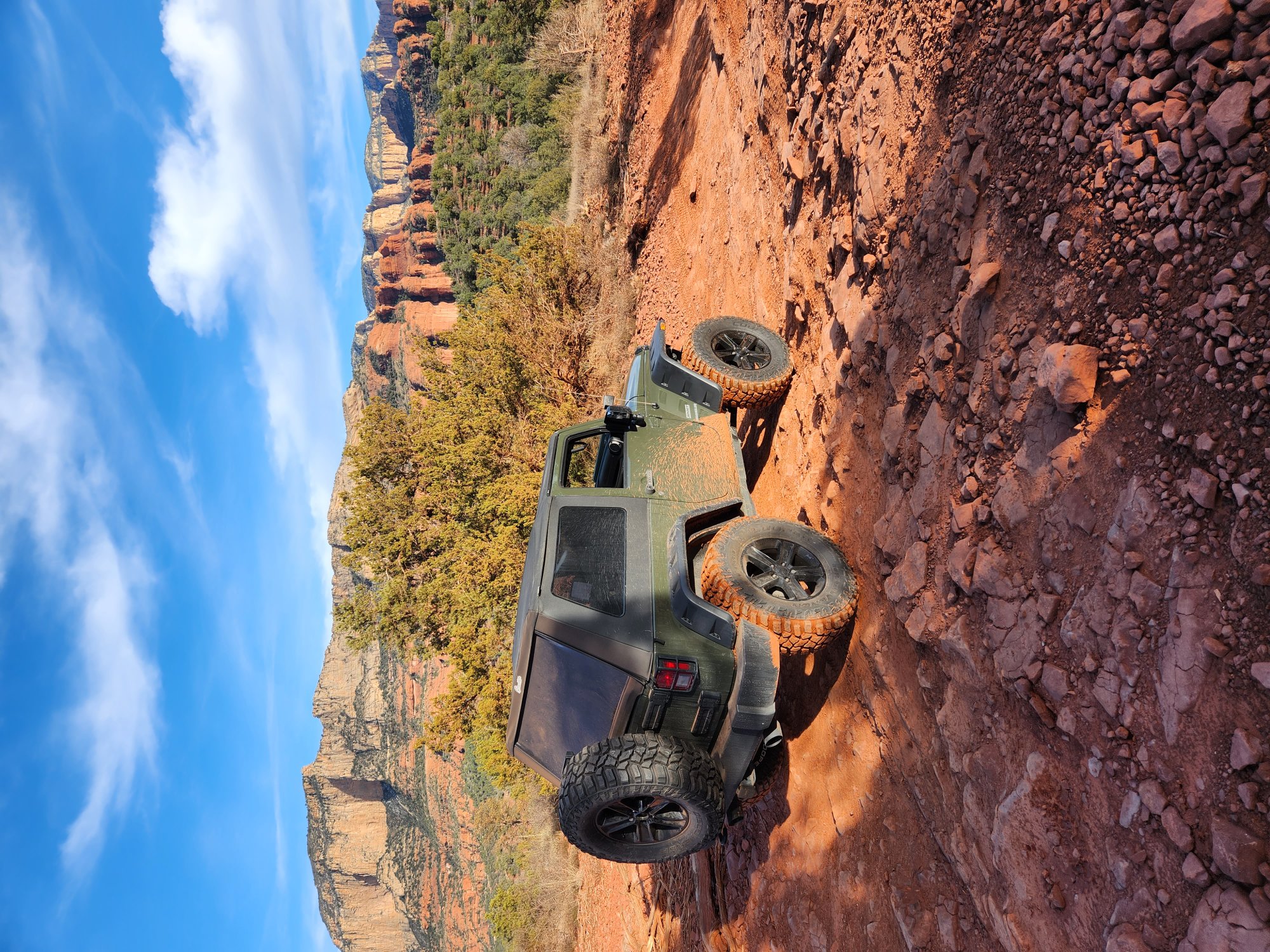 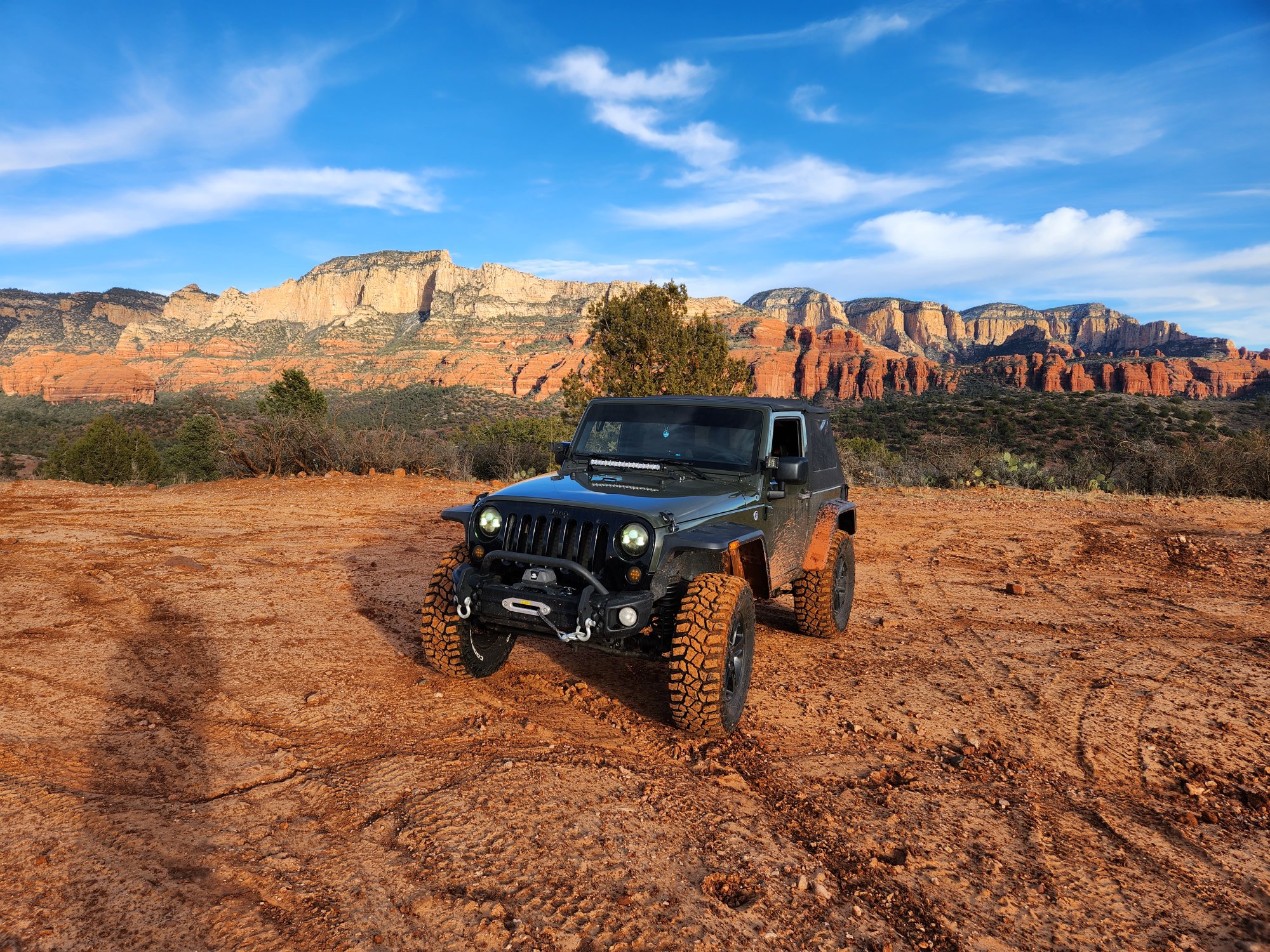 300
Status: Open
Rated 5/5
Visited: 12/26/2022
Difficulty Accuracy: Spot On
We took loy butte road to the ruins then hit the outlaw trail. You can take 2wd too the ruins but will need 4wd for the trail. Going counter clockwise. We started at the difficult end. just watch your tires on the rocks and take your time on some if the few first climbs. Nothing like diamond back gultch. There are usually utv rentals so be careful of those running around. At the end there is a rocky downhill, and a right climb with really one line. However nothing we could not do. I would rate the trail a two with some spots being a four. Took us total 2.5 hours from pavement to pavement, however we stopped a lot to take photos 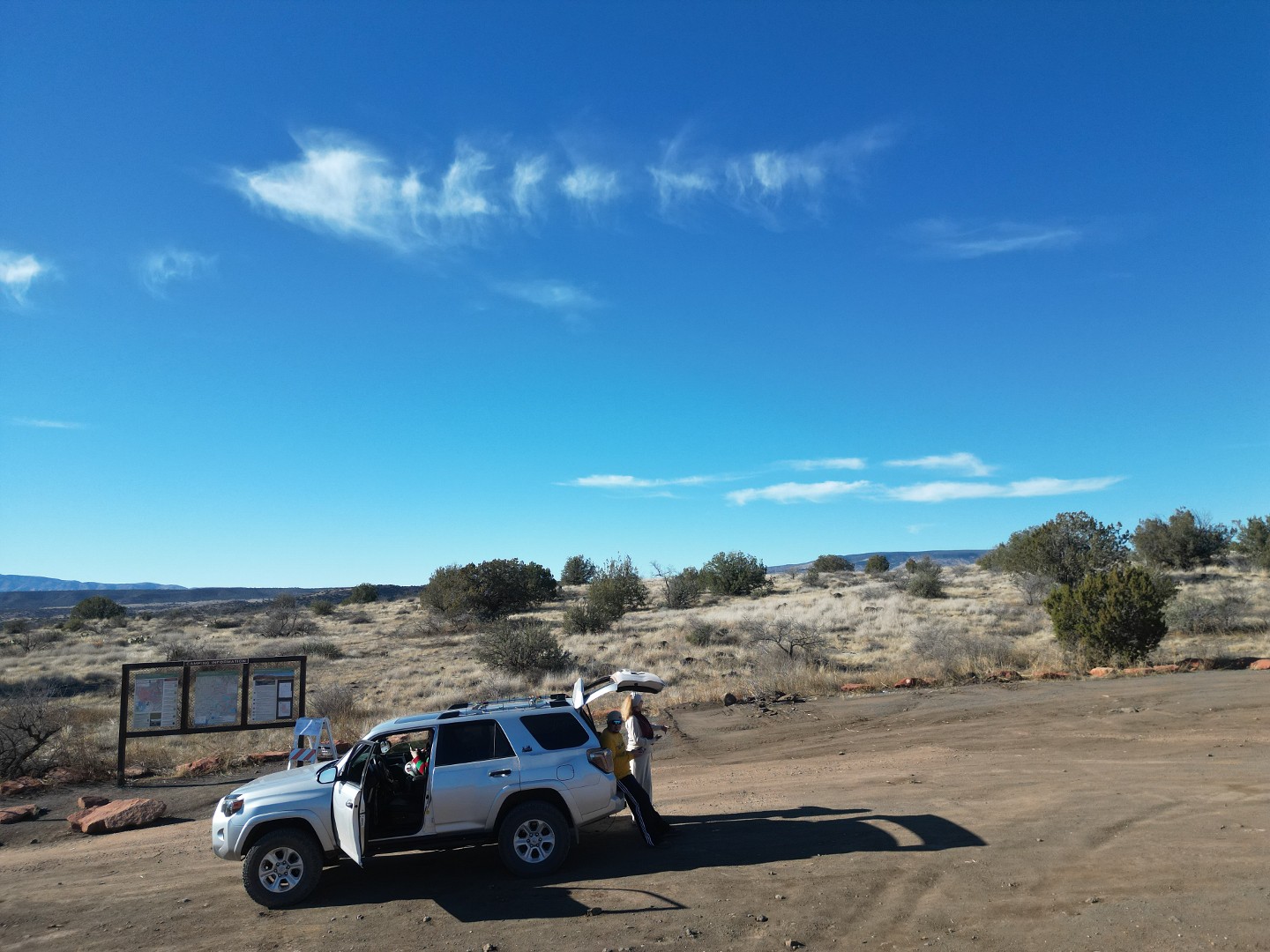 600
Status: Open
Rated 5/5
Visited: 11/15/2022
Difficulty Accuracy: Harder
Confession: I drive a mostly-stock 2013 (WK2) Jeep Grand Cherokee with Quadra-Drive (locking rear diff), Quadra-Lift (pneumatic 4" lift) and slightly oversized tires (265/65-18's, or barely 31"). I've only been on a half dozen or so serious trail-runs, some much harder than this, but always with experienced spotters. This was one of my first solos, which I specifically picked because it was "easy". That said, it seemed harder than a 2. Emphasis on the word "seemed", however, because even with my lack of experience, I got through here without scraping anything (other than some pinstriping) even once, and by the end of it, I was actually having fun. But where more experienced drivers would have simply driven over some obstacles, I had to get out and look. Plus I was the only other full-sized vehicle I saw that day: everything else was side-by-sides or dirt-bikes. One couple even stopped to ask if I was okay! (I was most of the way through by then, so laughed and said yes, and they laughed too and then took off, so that was a nice encounter...) So I guess I would call this a great "gateway" trail (credit to another reviewer for that term on his Broken Arrow review), where I learned a lot about my vehicle and my own capabilities. In short, what I've concluded is that rocks always look like bigger obstacles than they actually are, because decades of Interstate driving have taught our brains that a hole or ledge of these sizes would spell disaster at speed. But at 1 MPH, in 4-low and 1st gear, this stuff is relatively easy to either drive around or drive over. So why do I still vote this trail harder than a 2? Because to me, a 2 should be only one notch above a wash-boarded dirt road; basically a rocky road someone could still do in a Prius if they were careful. But I doubt anyone other than an expert (and a film-crew) could get a stock Prius through here. That said, if this relative newbie got through here unscathed in a mostly-stock Jeep Grand Cherokee, then given some relatively equivalent experience and rig (or better), you almost certainly can too, and it is a fun trail!
Sean Meesenburg

500
Status: Open
Rated 5/5
Visited: 04/02/2022
Difficulty Accuracy: Harder
Vehicle: 2 Door JL Wrangler Sport S; 2.5" lift. This is a really fun, well travelled, easy trail. The whole loop took just under two hours to run and the views of the Mogollon Rim in the distance are amazing. The trail guide is mostly still spot on, but for one exception near the end. There is no longer a bypass around the ledges @ waypoint 12, and the tight left hander over them probably pushes the mandatory rating from a '2' to a '3' (2:24 in the guide video / 9:54 in mine shows the difference). A longer wheelbase than my 2 door will have to put their left rear into a fairly deep hole at the base of the ledge - say about 20" deep. Just something to be aware of, as it's the most "difficult" part of the trail. The other 99% is no harder than a '2' and I never needed more than 4H for any of it. Ran it on a Saturday and had plenty of company in running in both directions - mostly side-by-side's, but also a few Jeeps and Toyota's as well. If you're looking for a fun, easy day, with great scenery, you really can't go wrong with this trail.
View More Images
Kevin C. Carroll

200
Status: Open
Visited: 07/16/2021
Great trail for a family drive, rock ledges half way through are as technical as it gets, going slow, taking it easy, didn't use 4x once.
Dennis J Fiore
400
Status: Open
Rated 5/5
Visited: 12/25/2020
Adventuresome trail for an overland newbie. Drove it starting on the north end. Ten minutes into the route, had to use crawl control on the 4runner to get up a rock ledge. Lots of interesting challenges throughout, and the hardest part was avoiding collision with the mindless tourist zipping around on side-by-sides. They are the biggest hazard. Several great overland camping spots as well.
Mark Knapp

400
Status: Open
Rated 5/5
Visited: 11/25/2019
A beautiful day, visited the two heritage sites accessed by FR 525. Made the return trip down Outlaw, the trail was a little cut up due to the recent rain and snow. Several mud puddles of considerable size. Ran the trail with no problem ,however the climb out of the wash at WP 12 was pretty tight and pretty rough. I wouldn’t recommend for stock suv unless it has a good lift and articulation. Otherwise the trail was a lot of fun and the scenery was awesome.
Erick Lemke

1900
Status: Open
Rated 5/5
Visited: 09/28/2019
You can also get to this trail coming from Cottonwood heading towards Sedona via 89A & Angel Valley Rd/Forest rd 525 turn left on to Forest rd 525! Our club ran this trail along with Greasy Spoon. It was a nice ride, the weather was awesome! The scenery stunning! My only issue with this trail is; it is overrun by the Sedona Atv rentals & Pink Jeeps. I can only speculate that this is best ran during the week??? Its still shows cases Sedona's beautiful Red Rocks from a different vantage point than being in town. Enjoy the Views.
Jack Edgemond
100
Status: Open
Rated 5/5
Visited: 01/02/2019
I stumbled upon this trail on my way to the Honanki Ruins a opted for the detour (meaning I ran it "backwards"). The trail was in good condition and the snowfall the prior day made it all the more fun. Be prepared to use the passing points as this trail is popular with those renting side-by-sides.
Gerrit Groenewold

600
Status: Open
Rated 5/5
Visited: 12/30/2018
I planned a day in Sedona running both Outlaw and Greasy Spoon back to back. The GPS listed on here will bring you exactly where you need to go. Outlaw is a solid trail. I ran it in the reverse way that is listed here. So I started at waypoint 13 and went toward the Honanki Heritage Site(Indian ruins). I took the first sign I saw that said Outlaw Trail. It was a quick run that does not provide much obstacles. But, much like others, I enjoy just being out in the good weather with my Jeep. If you are worried about the initial gulch obstacle do the trail as I did... in reverse. Most of the time going down is easier than going up and over obstacles. And if you still cannot make it over the gulch, you can turn around and came back the way you came. The whole trail will provide you with an outlook of Sedona red rocks. Check out the Indian ruins if you have time, will have to pay for a permit. I like to provide my vehicle specs as I believe it helps others compare and prepare for a possible trip. 15 Wrangler Unlimited Sport 4in lift with 35in tires Rock sliders Open diff- stock axles 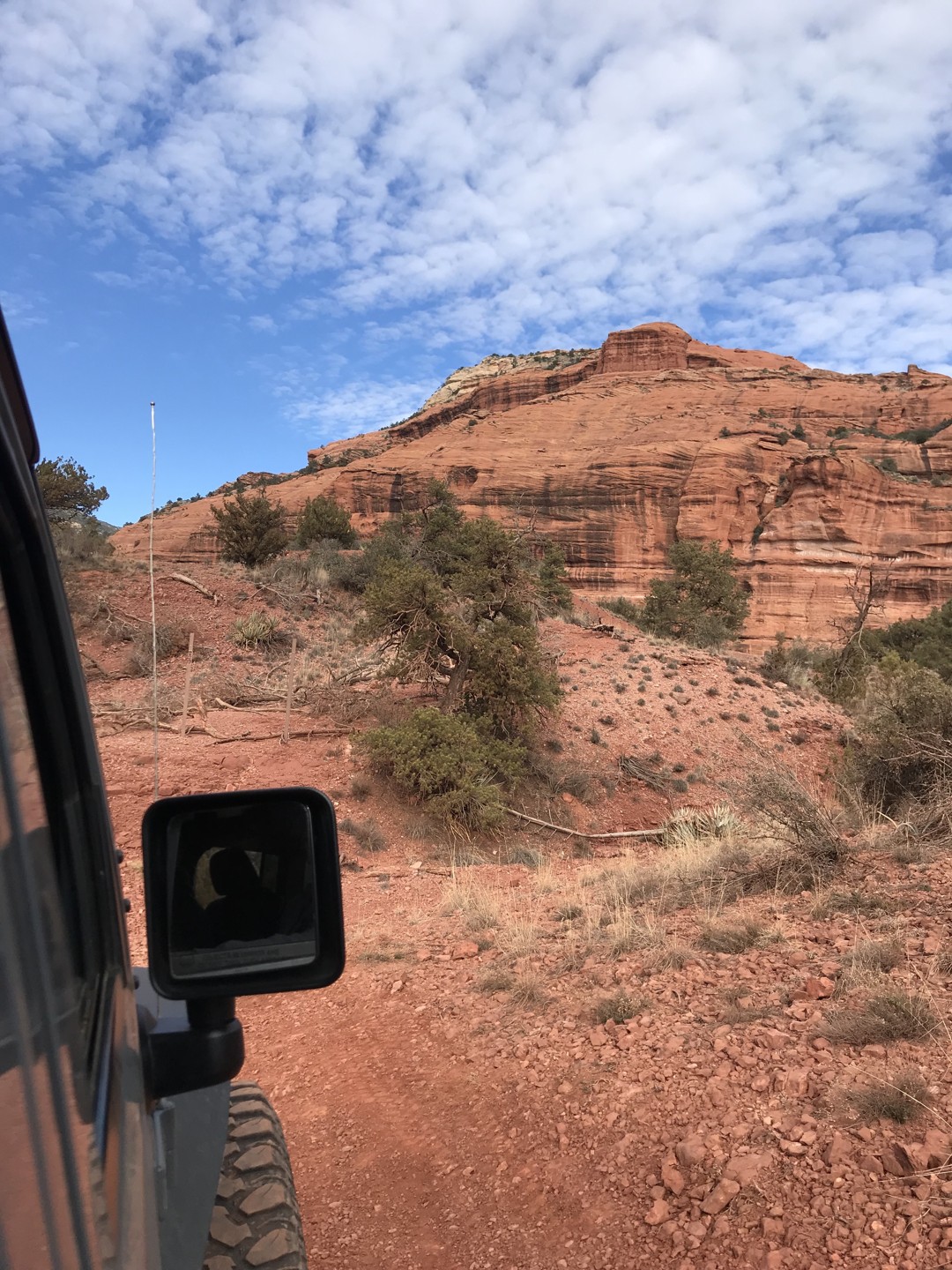 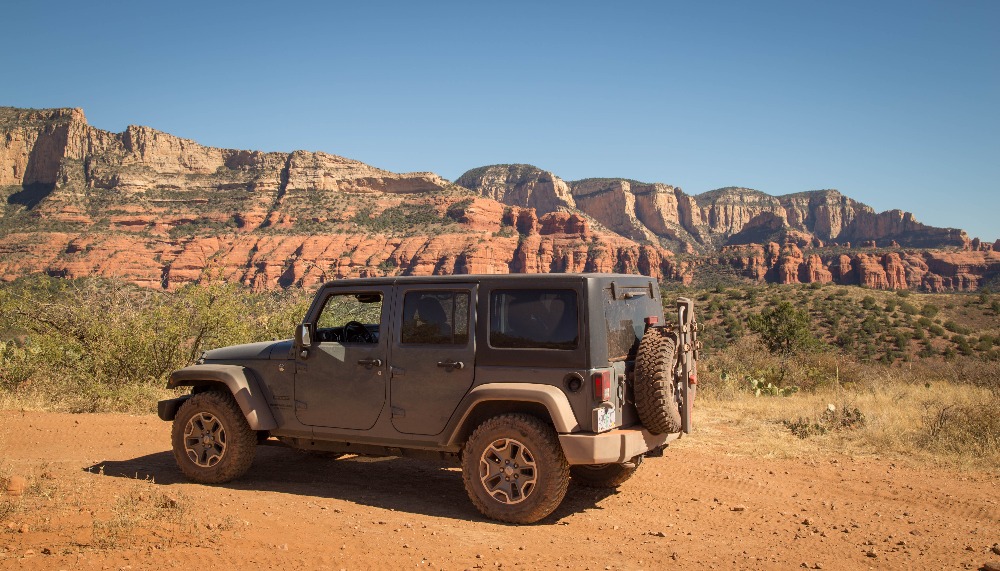 Mapping Crew - Arizona
Hawk Miller, born and raised in Northern Arizona is the owner of a Sedona Jeep rental company called MYE Jeep. He is an avid climber, hiker, and "Jeeper". Constantly out on excursions to discover new hidden routes and trails, he can usually be found wherever there is no cell service. He spends his free time in Austin, TX as a performance driving instructor, with an extensive history of off-road rally racing, he is no stranger to playing in the dirt!
Visit Profile