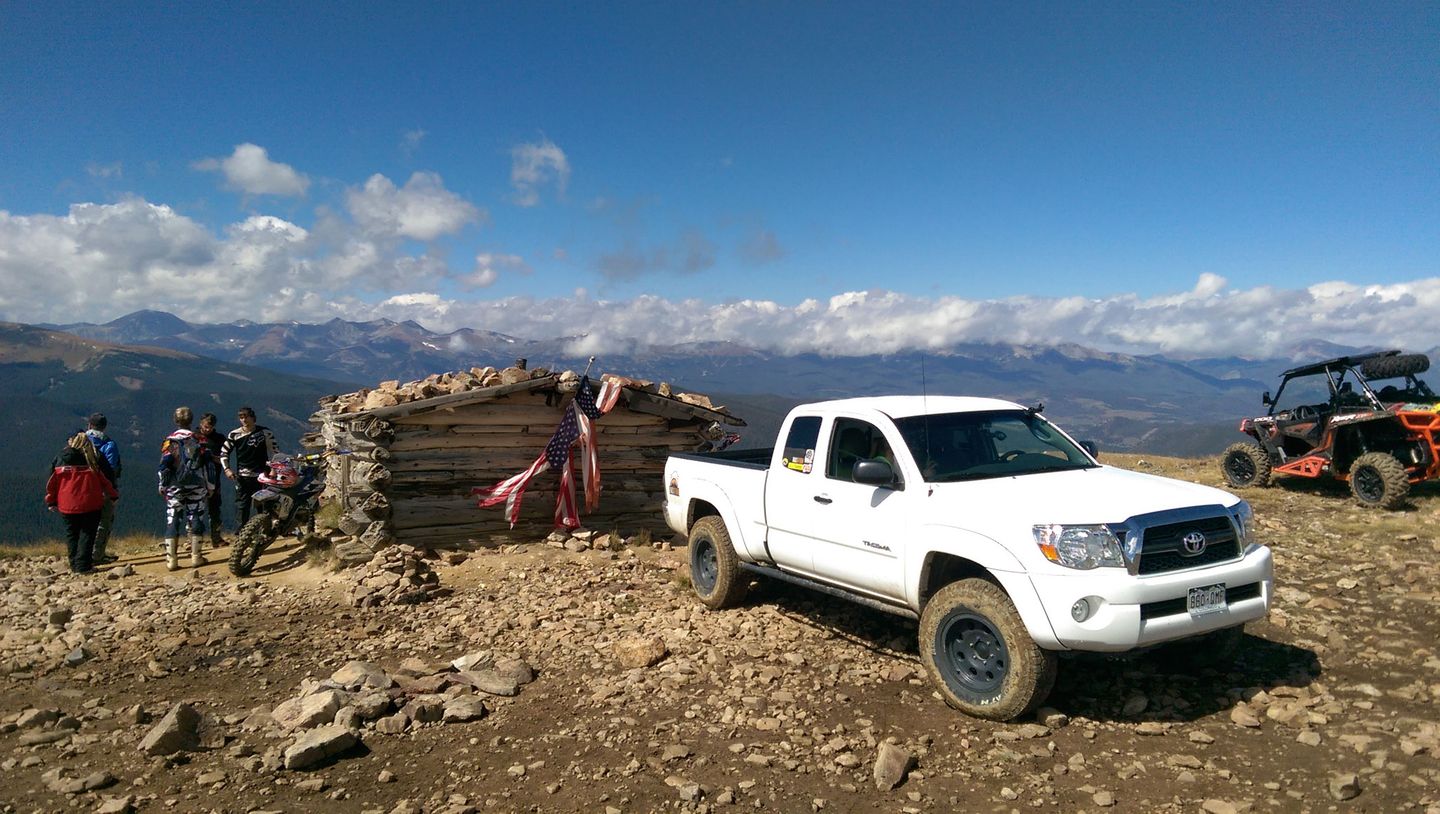 North Fork Swan River 4WD trail is one of the lesser known jewels of Summit County. The lower section offers a tight, rocky forest trail with loads of camping options and a few white knuckle moments. Above treeline, you'll find some excellent historical mining sites, and high alpine views that will take your breath away.

A large, embedded rock (about 18 inches tall) at waypoint 5 can be bypassed by smaller trucks. Full-size rigs will be forced over it. The V-notch at waypoint 6 has one really bad spot with a troublesome tree root on the driver's side (going up). Full-size trucks can get through, but there is a chance of body damage, especially if the trail is wet. The Rocky Hill at waypoints 11 and 12 has a more difficult option that pushes this trail's top-end rating to a 5.

Over all, North Fork Swan River 4WD trail is a bit tougher than its sister, Middle Fork. They both offer tight, rocky forest roads, a taste of mining history, and epic alpine views. While Middle Fork's crux has a much more challenging optional rock climb, North Fork is rougher throughout and has a couple of unavoidable obstacles. The two trails together, along with a short section of Saints John Road, make a fine loop. Or either of them can be combined with Saints John or Deer Creek to connect Breckenridge to Montezuma. North Fork Swan can be done in a good, high-clearance, stock truck with a skilled driver. The tallest rock obstacle (at waypoint 5) can be bypassed by narrower rigs, but full size trucks will have to clear the 18" rocker panel biter. Full size trucks will also need a bit more nerve to get through the V-notch (waypoint 6). And, naturally, wet or snowy conditions will bump up the difficulty a notch or two for everyone. Note: The .gpx track offered here takes the easiest route. As noted in the waypoint descriptions below, there are some more challenging lines that will deviate a bit, but should end up back on the track after the obstacle. Enjoy the challenge, but please stay the trail! Cellphone signal will be spotty to nonexistent throughout this trail. The nearest emergency room is at St. Anthony Summit Medical Center (970-668-3300), located just off CO-9 south of Frisco. Summit County Sheriff office (970-453-2232) is on CO-9 in Breckenridge.

While there are many dispersed campsites along the lower, forested section of the trail, this is one of the few where large RVs and trailers will have plenty of room. The seasonal gate is officially closed from November through May, although the gate is often closed well into June and some parts of the trail can be impassible with snow as late as July.

The well established trail to the left winds its way for a couple of miles through the woods to the ruins of an old mine. Sadly, it is now closed to vehicles. Continue straight on FS 354.

At the ruins of the mining camp of Rexford, follow FS 356 which forks to the right up Garibaldi Gulch. FS 354 continues up the North Fork of the Swan River. (North Fork Swan Extension trail coming soon.) Just after the fork is a water crossing. In Spring, the water can be fast and somewhat deep, but nothing to worry about. After this point, the trail becomes noticeably narrower, rockier, and more picturesque.

Here, a large, embedded rock blocks the trail. Narrow trucks might be able to just squeeze by on the left. Stock trucks that can't bypass left should stay to the right to minimize the chance of this guy biting your rocker panels. Shortly after this, a dead end spur forks to the left. Stay right to continue on FS 356.

Here begins a couple hundred yards of washed out v-notch. At one point (pictured) a stubborn tree will take a swipe at your mirror, but good wheel placement will get you through. Full size trucks can get by with skill (or a certain lack of concern for body damage). Naturally, if this section is wet, there is a greater risk of slipping to one side or the other, so use caution.

To the left is a maintained emergency cabin that is usually stocked with basic survival supplies.

Just as the trail breaks treeline, there are some mine ruins to the left with a small parking area. The trail takes sharp switchback to the right.

At this well marked intersection, we recommend you take the short, optional spur to the right. This leads to the summit of Wise Mountain. Otherwise, turn left, subtract 0.4 miles from all subsequent points, and skip to waypoint 10.

The summit of Wise Mountain is a popular photo op and lunch spot with fantastic views. Just below the summit are the ruins of a large shaft house. (Interesting to look at. Dangerous to explore! Seriously! There is a 1200 foot vertical shaft under there! They probably won't bother to fish out your body.) To the south, Breckenridge Ski Resort is spread across the Ten Mile range. To the east across the Middle Fork Swan Valley, you might be able to make out the summit of Georgia Pass on the shoulder of Mount Guyot. And to the north, your next obstacle awaits: the two forks of Rocky Hill. A maintained emergency cabin here is usually stocked with basic supplies. There's also a guest book, so stop in and leave your mark. [EDIT: See third pic. Sadly, after 140 years, sometime in early 2018, the floor of the cabin collapsed. It's no long safe. Please steer clear.] The summit can get crowded on weekends, so please be respectful. After you've got a good picture of your rig in front of the cabin, park elsewhere to give others a shot. And, above all, DO NOT drive on the delicate tundra grass! Stay the Trail!

From this point, you should be able to see if any trucks are coming down the ridge line to your right. If so, it would be a good idea to let them come down before beginning your climb. The next few hundred yards are the most technical of North Fork Swan. The rocks here are very loose and get bigger as you climb. About half way up, the more difficult option forks to the right. It is very steep and the soft soil and bowling ball sized rocks offer very little in the way of traction. The easier left fork (represented in the GPX track) is less steep and the rocks are a bit smaller, but still challenging.

If you are traveling from east to west, most of Rocky Hill is hidden from view below. The easier option is to the right. The ATVs pictured are descending the much looser and much steeper left fork. Take a moment to watch for traffic come up. There is no option for passing on the hill.

This is the highest point of the trail, just over 12,600 feet. There are two points in the ridge line, maybe 100 yards apart. Each offer a small parking area and epic views. Just be sure not to drive on the tundra grass. On a clear day, you can just make out the summits of Santa Fe Peak and Red Cone to the east. Across the valley below, you can see a bit of Middle Fork Swan, and beyond that, the summit of Georgia Pass on the shoulder of Mount Guyot.

After a short, rocky descent, the trail ends at Saints John Road, FS 275. To continue on Saints John down to Montezuma, turn left. Continue straight to meet up with Middle Fork Swan River and Deer Creek, FS 5.

On CO-9, between Frisco and Breckenridge, turn northeast at the traffic light onto Tiger Road/Shores Lane. Pavement ends after approx. 3 miles. Continue on Tiger Road past dredge tailings and a wide parking area on the right. At an obvious fork in the road, reset mileage. Left (north) is FS 354, North Fork Swan. Right (east), and across a narrow bridge, is FS 6, Middle Fork Swan River.

Dispersed camping is allowed all along the route. The lower part of North Fork has several large, flat campsites that can accommodate small RVs. Further up are smaller tent sites. There are a few National Forest campgrounds at nearby Lake Dillon. More civilized lodging can be found in Breckenridge, Frisco, Dillon, and Silverthorne. 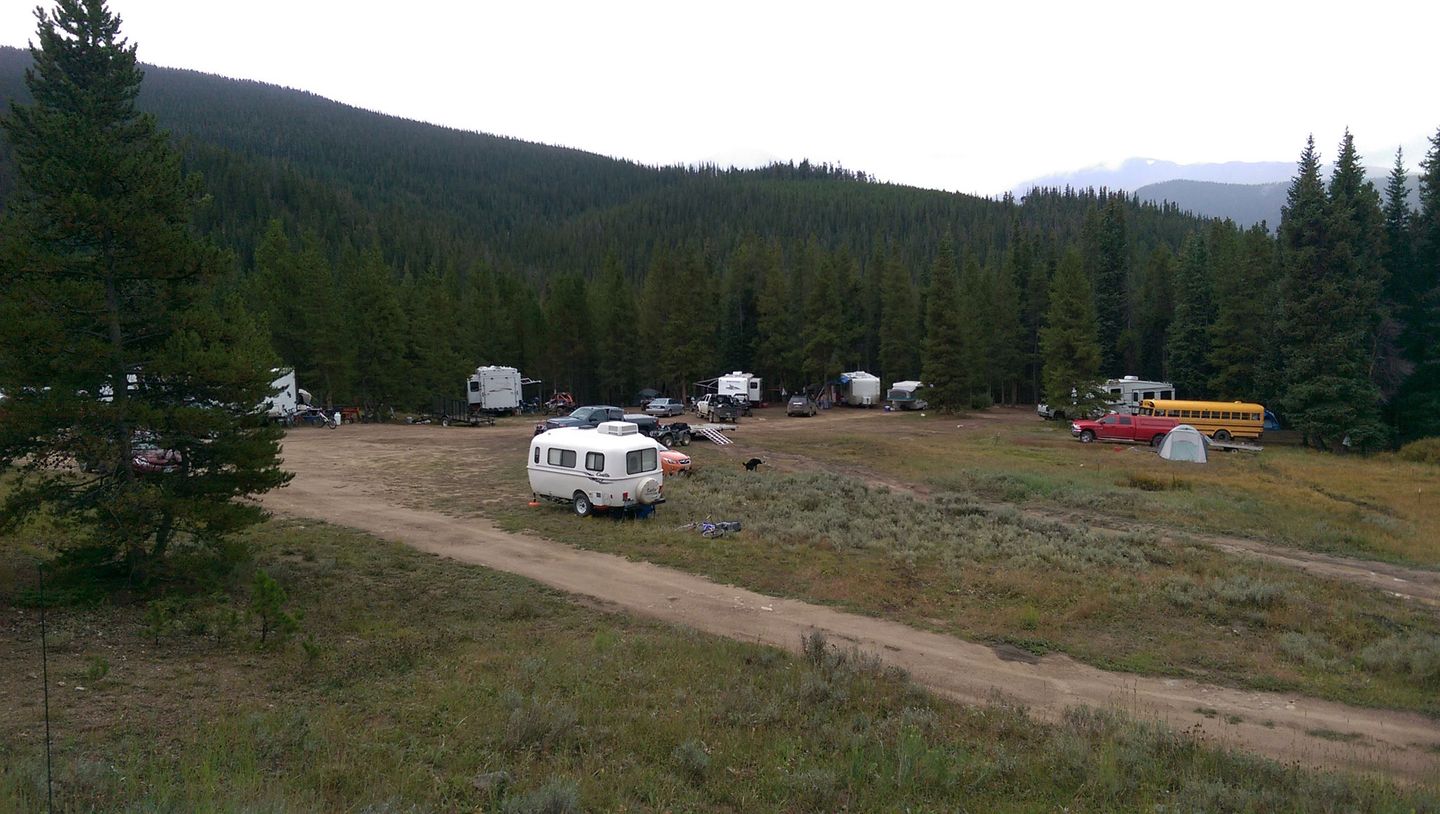