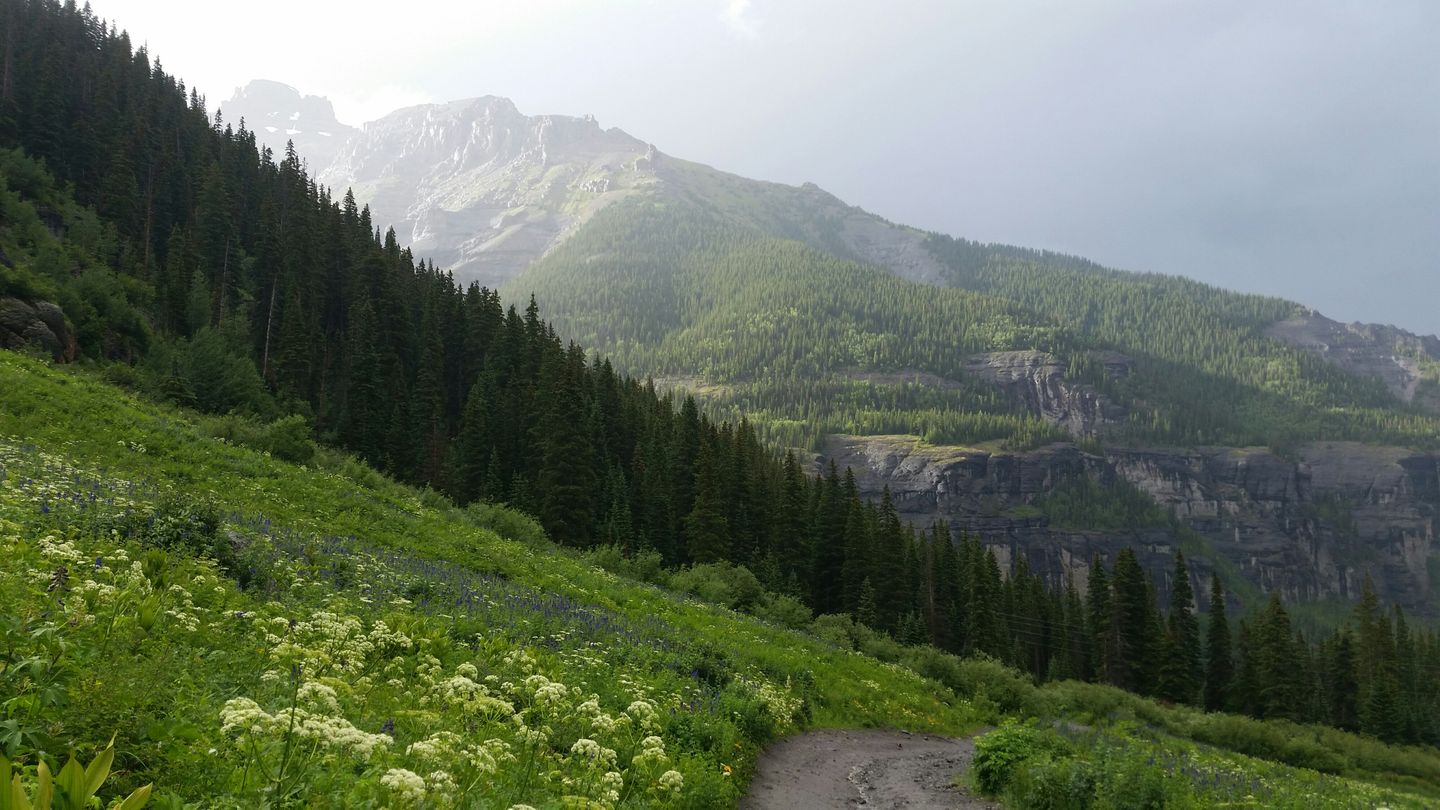 Imogene Pass is truly an icon of the beautiful state of Colorado. Offering gorgeous scenery and traversing Colorado backcountry rich in mining history, Imogene Pass offers an opportunity to look back into time and relive what it would have been like to live and work in this area. What was at one point one of the richest gold and silver mining areas in Colorado, the remnants of huge mining structures and machines are plentiful. Information about these areas are documented along the route on permanent signs and placards. Book-ended by the beautiful towns of Telluride and Ouray at either end of the trail, Imogene Pass offers travelers the ability to get away from civilization yet never being very far from a warm meal and bed if that's what is desired. More information, as well as an intriguing look at some of these mines in their heyday is available from Miningartifacts.org

The trailhead appears to be an alley behind neighborhood homes in the area. However, the trail is well marked and the Forest Service signs are present from the very beginning. Be advised that this first stretch of trail is a residential area, please make sure to keep noise levels to a minimum.

This trail can be run from west to east (Telluride to Ouray), or from east to west (Ouray to Telluride). **Telluride to Ouray:** As you drop down into Telluride on Main Street, Turn north on Fir Street, make the first left on Columbia Avenue and then take the first right onto North Oak Street. You'll be headed uphill on Oak Street in a residential area. At the very end of the street, turn right...You'll feel like you're driving in an alley behind people's houses, but this is actually the trail head. (see route description from here). **Ouray to Telluride:** From the south end of Ouray, turn right at the entrance to Box Canyon Falls (first left handed switchback heading south). This is Camp Bird Mine Road. This is the same road that will take you to Imogene Pass, Yankee Boy Basin and Governor Basin... It's is a fairly well maintained dirt road with a few pot holes and wash boards, but is used daily by trail users and miners (The Camp Bird Mine and Virginius-Revenue Mine are both currently active). Follow Camp Bird Mine Road approximately 4.8 miles. The entrance to Imogene Pass is marked and will be a left turn at the driveway into the Camp Bird Mine. There is an alternate entrance 1.3 miles further west, trail information on that route can be found HERE.

Ouray County has announced that plowing operations have begun for these trails. From the county:

Crews will begin work May 6, 2019 with the goal to have all High Country Roads open by the July 4th weekend.

***Please be aware: Southwestern Colorado received an exceptional amount of snow during the 2018-2019 winter. Roads may be cleared later than usual, and dangers like avalanches may still exist into the summer months. Please use caution when venturing into these areas.***

Crew 1: Yankee Boy (Depending on snowfall, anticipated time to reach the Outhouses is 4 days.)

Crew 2: Crews will move to help open Imogene after the completion of Engineer

–Greg Stokes (06/08/2019)
Q: I'm helping my mother move (and towing my JKU behind the U-haul) from Wisconsin to Arizona in the first half of August. The way back, I've decided, will be my much needed break from that journey, and I have flexibility at work to kind of "wing it" so I can play! I want to do Engineer, Yankee Boy, and Imogene for sure and am curious about the narrow road situation... I know uphill bound vehicles have the right of way, but if you encounter a vehicle and there isn't room to pull over, what is typically done? Or are the narrow sections easy to see what is coming at you so I shouldn't worry about it?
–Yan Y Saillard (06/06/2019)

–Greg Stokes (06/06/2019)
Q: While I know this site is primarily for 4WD vehicle enthusiasts, I'd like an opinion for taking on Imogene in a 50" side by side UTV with stock clearance. In some regards the smaller size I would think would be an advantage but can't speak to ground clearence needs and other hazards. I appreciate the consideration.
–Gregg Macaluso (05/08/2019)

Read More
Greg Stokes Is a Colorado native, born and raised in Colorado Springs. He has been off-roading since childhood, his parents say his first trip was a Jeep run over Medano Pass when he was only 14 Months old. Greg has been at the wheel of everything from dirtbikes, ATV's, early Jeep CJ5's that he has restored, Wranglers, and presently explores in a 1997 80 Series Toyota Land Cruiser and a 2016 Kawasaki KLR650 motorcycle. Greg is a proud Husband and Father of 3. His passion in the off road world is the vehicle-reliant world of Overlanding. He hopes to one day make it to Canada to Explore the Yukon and Northwest territories.
For individual use only, not to be shared.