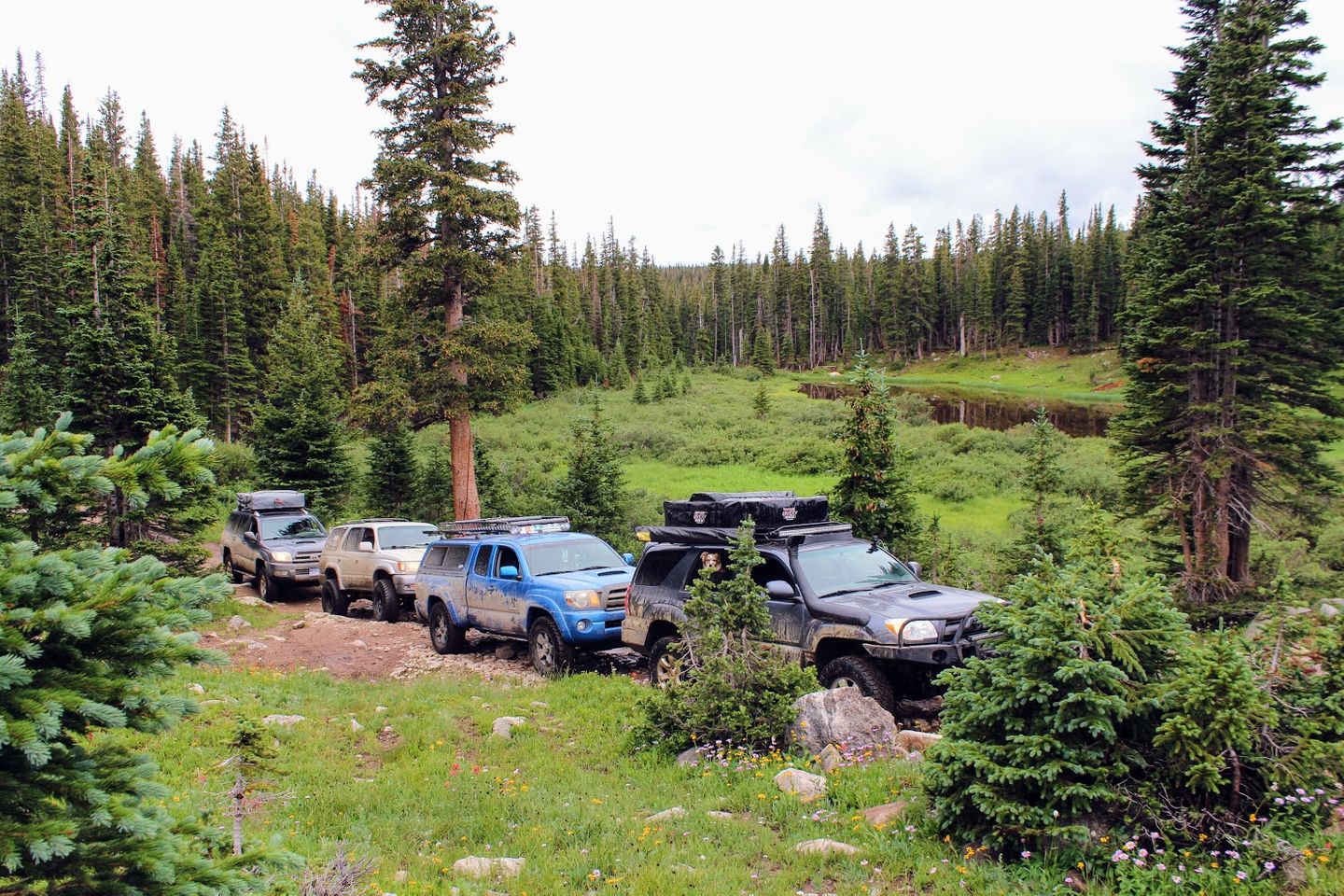 Jenny Creek is a short fun OHV trail (Permit Required) that spurs off Rollins Pass East Trail. This straight through trail is accessible during the summer months typically July - October. Some of the Highlights are the Jenny Creek water crossing, beautiful dense forest scenery, pine beetle kill clear cut area and the alpine lakes also located at the top of Rollins Pass. A few small rock sections keep the trail interesting from a technical standpoint.

The Jenny Creek Trail Head is located on the right side of Rollins Pass East roughly 6 miles up. The trail head is relatively new (Within the last 5 years) due to the old Jenny Creek route being placed into restoration.

Trailhead Coordinates: 39.922693, -105.614898
Take Highway 119 to Rollinsville. Turn West onto CR 16 (Moffat Tunnel Road) and continue for 7.3 miles and you will find the Rollins Pass trailhead on the right with a parking area and sign. This is a great place to air down tires to head up to the Jenny Creek trailhead. Head up Rollins Pass East for approximately 6 miles. The tailhead for Jenny Creek will be marked with two signs on the right side of the road reading "TO JENNY CREEK" and "502" both with a right turn directional arrow.

Trail was open when I went up, might be closed now because of the fires. I have a 08 FJ Cruiser with a 3" lift and 33" tires and it did very well on this trail. Maybe only 3 sections that were butt puckerers and I never hit my skid plates nor had to lock my rear diff although I did have to put my off road traction control on. My buddy has a Jeep XJ with the same lift and tires but no traction control or locking diffs and he had to send it a couple of times and hit his skid plates. Jenny Creek was very low, I've seen it much higher before. I did scratch my paint pretty good in a few sections as did my buddy as the line took us into some branches. Yankee Doodle, Jenny Lake and the Forest lakes are beautiful and worth the drive but of course you can just take Rollins Pass road which is much easier than the Jenny Creek route.
Ran this north to south today in my Tacoma. There were some technical rock sections but nothing too crazy. For me, it made for a fun challenge. I used my rock sliders twice. Made for a good fun day. There were lots of great creek side camping sites on the north end near Yankee Doodle Lake. I had to cut a downed tree at the south end of the trail.
This one was a little more difficult than I had anticipated but didn't have any issues getting through it.
Ran it today. First time it started to rain on us which made this trail a bit more interesting. Had a set of 7 or so side by sides come down the wrong way... fortunately we happened to be at an intersection with a pull off. Trail is open beginning to end.
The majority of this trail is open and passible. However, at the lake end of the trail is a very large snow bank blocking the entire trail. That part isn’t passible. An ATV can probably get through but I wouldn’t recommend taking a Jeep.
Ran Jenny Creek Trail and can report that it isn't passable at the present time due to snow. There is a snow field directly after the creek crossing that you can't see when heading westbound (we had to back across the creek). This trail is very narrow! My buddy took out his headlight with a downed tree! Maybe another few weeks before the snow melts sufficiently here and at the top of Rollins pass
Attempted to run Jenny Creek Trail and can report that it isn't accessible at the present time due to snow. There is an impassable snow field shortly after the creek crossing when heading westbound, near the intersections of FS 502.1 and FS 808.1. FS 502.1 westbound from FS 149 is completely open and passable up to this point. Maybe another week or two before the snow melts sufficiently.
There is a decent sized snow drift next to some trees soon after the creek crossing mentioned in the last review which is kind of hard to get over due to their being slippery logs for traction on one side and snow on the other, with the slope angling towards the trees. I turned on lockers and was able to crawl it but there is a risk of sliding into the trees and doing body damage. After that you can do most of the trail and get all the way up to within a few tenths of a mile to the intersection with Rollins Pass Road before reaching impassable snow drifts, I would guess you will have to turn around and go back for at least another 2 weeks given the size of the drifts up there.
We were able to get a couple hundred feet past the water crossing when we ran into a 3’ tall snow drift. I and a lifted Rubi tried to go over but wisened up and backed out. A side by side was able to get by it but told us there was an even bigger drift further up the trail.
Excellent conditions. Water crossing was a mere ~4". Great fun w/ very few people around. Aspen leaves are almost at their peak which is quite early this year. A few spots were tricky and a spotter was helpful but overall a beautiful trip up a mountain w/ great views and enough of a challenge to keep your attention.
Fun trail. Not too many areas to pull off for opposing traffic. Definitely better to run it uphill. This was challenging in my stock Tacoma. We took Rollins to the top and saw a few jackasses on ATV's destroying a marsh trying to get there vehicle unstuck... STAY THE TRAIL!!!
The trail is currently not accessible due to snow conditions. The southern end of the trail has several, off-camber, 2'-3'+ deep snow drifts right at the beginning making travel impossible. The northern end you cannot even get to, due to snow blocking Rollins Pass. This was with well-equipped Jeeps on 37s, lockers, and winches.
This is a fun, winding, narrow trail that runs mostly parallel to Rollins Pass and is a more interesting and challenging alternative to get up to Needle Eye Tunnel. The snow drift at the top of Jenny Creek has finally been bashed through, and you can re-connect with Rollins Pass at the end.

Read More
Matt is an avid off-roader/outdoors-man getting his start in Virginia. At the age of 18 Matt bought his first Jeep and as we say, the rest is history. Since moving to Colorado in 2010 Matt was introduced to the long, scenic trails in places like Ouray, Telluride, COBDR and Moab. This is where his love for overlanding, back country and camping really took foot. Matt is a GIS Analyst by trade so mapping is his jam. You can find him all summer long spending his weekends in remote locations in the mountains living out of his roof top ttent.
For individual use only, not to be shared.