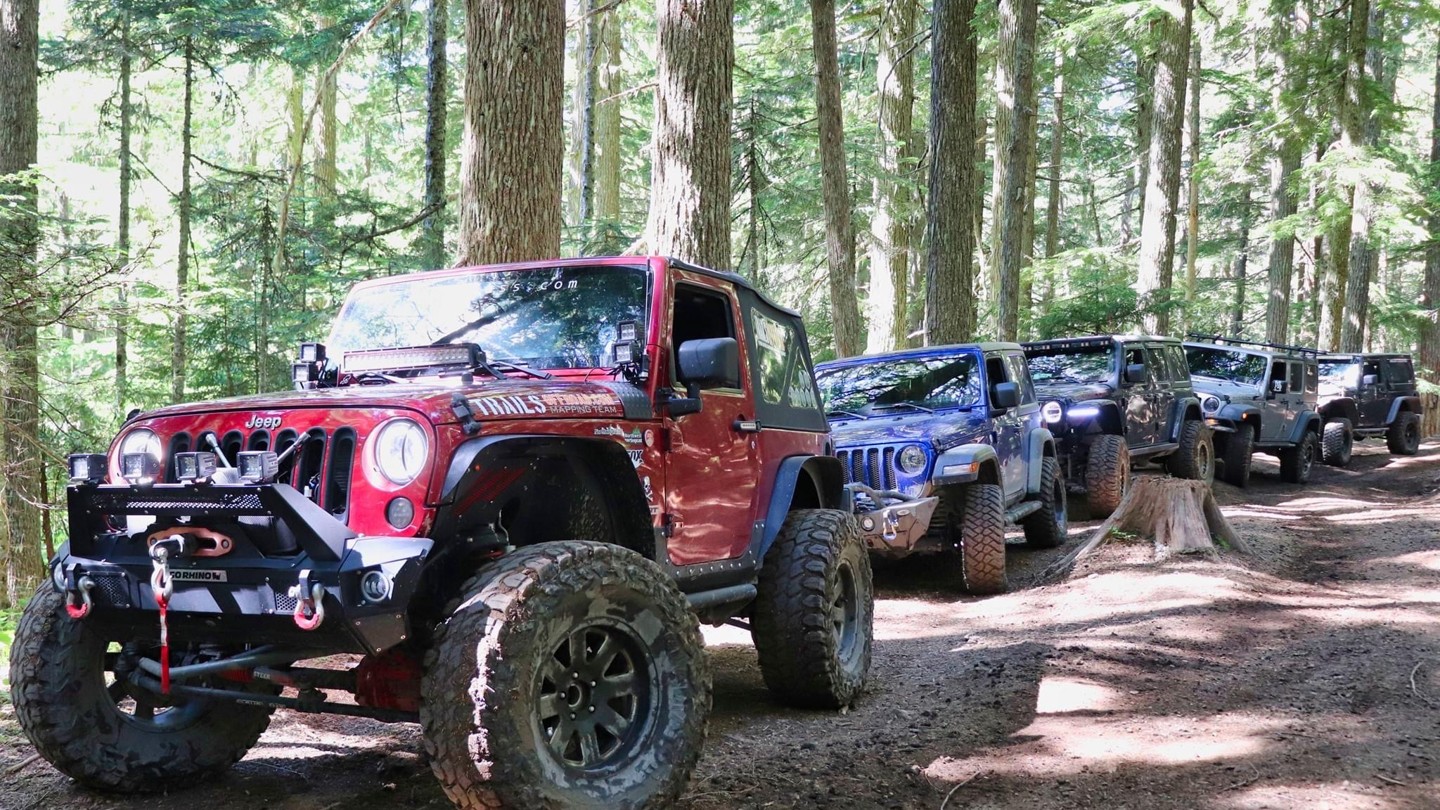 Naches Trail is a 12.26-mile long trail from Western Washington over the Naches Pass into Eastern Washington and follows a Wagon trail used by settlers in the mid-1800s. The trail is fairly easy for most 4x4 vehicles and does not require any special equipment. It rolls through deep dark forests up to high mountain meadows with beautiful views of surrounding valleys, canyons and views of Mt. Rainier. There are several creek crossings but most areas that might cause trail damage are protected by several wooden bridges. This trail is very popular and you can expect to run into other rigs and motorcycles coming in the opposite direction. Because of its rich history and overall beauty, this trail is known to most as a favorite - must do - trail. This trail intersects the Pacific Crest Trail that is a hiking trail from Mexico to Canada. It is at this point that a cabin was built that is free for use to all. While you are crossing over the pass try to imagine wagon trains pulled by Oxen struggling across the same terrain.

Naches trail is mostly soft dirt and gravel. This trail can get muddy early or late in the season. This trail is a straight-through trail and can be driven in either direction. For this trail guide, it was written from west to east. This trail follows an old wagon trail that was used by settlers in the early 1800s to the summit over the mountain pass into western Washington. The trail is about 12.26 miles in length so allow about 4 hours to complete. This trail will have three different starting points. Starting point 1 is for experienced drivers and is best navigated with at least some kind of lift and larger tires with good tread. Starting point 2 would be considered a good place for an intermediate drivers and starting point 3 would be for stock or beginner drivers.
This trail is shared with dirt bikes and side-by-side vehicles, you may encounter both coming in the opposite direction at any turn. Please be careful on blind corners.

This start point starts out with about a 200 yard, 45-degree hill climb that most rigs with aggressive aftermarket tires will not have trouble with. If you are running stock on stock tires and the weather is wet you might have to rethink attempting this start point.

After the hill climb, you will come to this Ditch Obstacle. When its dry this obstacle can be pretty easily navigated. Beware if it is wet, you might end up with some side body damage on the right as the whole thing is off-camber. There is a bypass on the left.

This mud obstacle was not very difficult, though with some rainfall I'm sure it can get pretty deep. There is a bypass on the left.

At this trail intersection, you will stay to the right. This trail to the left goes up on top of the ridge to a very nice campground area.

At this intersection stay to the left. I haven't explored this trail on the right.

This is Start point 2. It is another hill climb that can be a little tricky as about halfway up there is a stump on the right and the trail is off-camber. Pull in your right side mirror and get as close to that stump as you can. I'm talking about inches. If you try and stay left which is what your brain is saying, gravity will bring you crashing into the stump. If the weather is wet please your good judgment as to whether you have the skill and recovery equipment to get yourself down when you are spinning wheels half way up.

This rock ledge is a lot of fun as you can't see the bottom as you inch your rig out and over the ledge.

This is Start point 3. At this intersection of NF-7080. This is the best starting point for novice and totally stock rigs. There are no more hill climbs and off-camber sections to worry about. The trail gets pretty mild from here.

These are some wonderful mountain meadows that are just beautiful in the spring with all the flowers blooming. Keep your eyes peeled for Elk, Bobcat, and Cougar.

This is a four-way intersection with an unknown forest service road. Continue straight.

Government Meadows is the home of Camp Urich. When you arrive pull off the trail and park your vehicle along the wooden fence on the right. It is a short walk to a log cabin complete with a loft and a wood burning stove that is open for everyone to use. The cabin was built in 1992 by a local snowmobile club in tribute to one of their members. The cabin is nestled between the Pacific Coast hiking trail which starts in Mexico and ends in Canada. The trail crosses the Naches trail at this point. The cabin is first-come-first used basis, which means that it is often shared between hikers, Jeepers, and other 4x4 crossers. This is a great place for overnight adventures. In the summer months, you often hear stories of people's hiking adventures on the Pacific Coast Trail, some of which have taken months to get to this point. There are outhouse facilities located behind the cabin. This is a great spot to bring the family to camp for the night. Enjoy this recreation area but please pick up after yourself. The views are spectacular, and with the possibility of deer and elk sightings in Government Meadows at sunset, it becomes magical.

This sign was erected by a local Boyscout troop in memory of the settlers that first traveled this route with oxen and covered wagons.

This is a trail intersection of an unknown forest service road. It is at this point that you cross the border from the "Mount Baker-Snoqualmie National Forest" into the "Okanogan-Wenatchee National Forest. You will also notice the terrain now becomes a lot rockier and dryer for the most part. At this point, the Naches trail takes the name of Trail 684.

This is a trail intersection with NF-1914, continue straight across the road.

This view is pretty spectacular on a clear day, you can see lots of roads begging for exploration.

This is an Intersection with NF-1913. Take a left and continue the trail on the other side of the bridge on the right. If you want to cut this trial short you can turn right and continue to NF-19. Go left on NF-19 and drive about 12 miles out to Hwy 410.

Once you cross the bridge pick the trail back up on the right. Trail 684 and Trail 941 run together now until the end.

Unknown Trail intersection....Stay to the left.

If you running this trail from West to East: From the town of Greenwater start your vehicles trip meter at the Greenwater general store and continue South East on highway 410 towards Mount Rainier National Park. At 1.7 miles turn left onto Forest Road 70 (NF-70). Stay left at the first fork in the road at mile marker 1.7. Another road will intersect at mile marker 3.9, Stay left and continue on NF-70. The pavement ends at mile marker 10.7. There is a flat gravel area to the left that is a popular site to air down and disconnect the sway bars. There is also an informational board and NF road map at this location. From this point continue on the gravel FS-70. There are a few areas that you will pass that are popular target practice areas, Do not be alarmed if you hear gunfire. There are three separate starting points to the Naches Trail. The first start point is recommended for experienced drivers. The second entrance starts with a more difficult climb that has a unique obstacle in the middle. This section is rated as more difficult. The last entrance is less technical and the more common entrance to the Naches Trail. You will pass one sign on the left that says Naches Trail (This is the first entrance to the Lower Naches. At mile marker 14.1 there will be a brown wooden sign with yellow letters on the left that says, "Naches Trail" (This is the second entrance to the Lower Naches Trail) take a left off FS-70 and onto FS-7065. This will lead you to a small more difficult section of the trail. You can bypass this section by continuing straight on FS-70 for 1.6 miles and taking a left at FS-7080. The entrance to the Naches Trail will be 1/2 mile on the right.

There are many locations to camp along the trail. The most popular and the one that we recommend most is Camp Urich at Government Meadows. Here you will find a beautiful log cabin that comes complete with windows, a loft, and a wood burning stove. This cabin is unfurnished, has no power, but will sleep 20-40 people comfortably. It is a shared location so you may be spending the night with others. This location has a fire pit, wood available to burn, and two outhouse style toilets. The only way to get to Camp Urich is via the Naches trail or by foot on the Pacific Crest Trail. This is a great location to bring your family and friends to camp for the night. There is additional camping on FS-70 on the way to the trailhead, on FS-1914, and many great camping locations on the Little Naches River rd FS-19 at the end of the trail. Lodging is available in the town of Enumclaw, WA at the beginning of the trail and in the town of Naches, WA at the end of the trail. 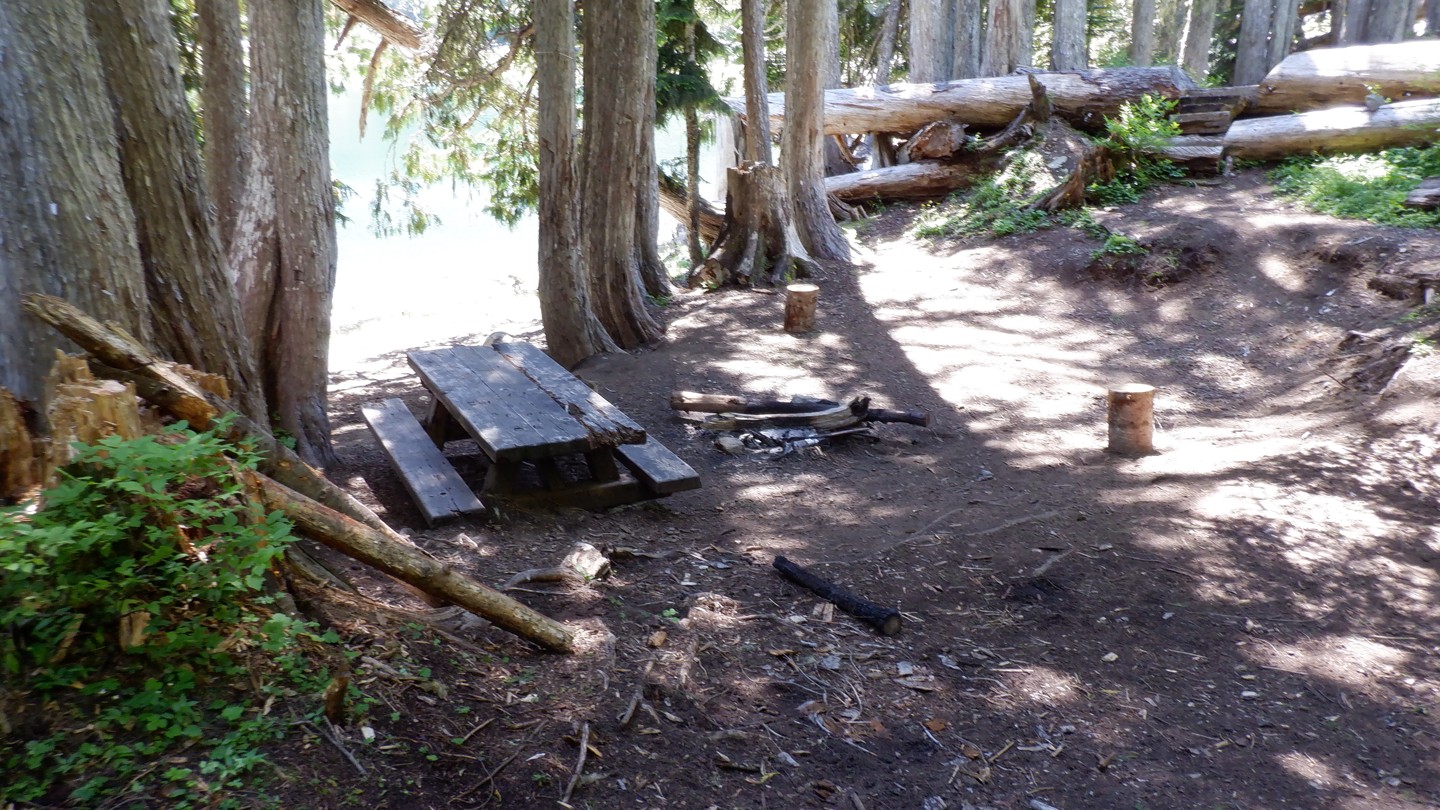 Read More
Michael Graham is retired from the U.S. Army as an Infantry First Sergeant with 23 years of service. He did a tour in Iraq and one in Afghanistan. He presently owns a Process Service Company in Tacoma. He is originally from Upstate New York but after being stationed in Washington knew immediately that this part of the county felt like home. He had a Jeep CJ5 as his first 4x4 but back in the 80's there wasn't a lot of hype and add-on parts as there are today. Building your rig is half the fun, making it your own style. He has actually found it to be an addiction. He lives in the Pacific Northwest, in the Tacoma / Puyallup area and loves the sport of "wheeling" which allows access to so much more than a hiking trailhead. He enjoys organized rides and poker runs and the freedom and exploration this sport allows. Finding this website and authoring trail write-ups has really enhanced this sport for him. If you are new to the sport or just looking for someone to show you the trails he would love to hear from you.
For individual use only, not to be shared.