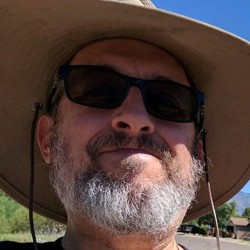 Off-Road Experience:
6+ years
Off-Road Style:
Overlanding
My Garage:
I moved to Arizona in 1984 and bought my first offroad vehicle the next year. I had lots of adventures, seeking out the Old West on paper topo maps in my Toyota FJ40 and can say, fortunately, that I never had to walk home. In 2005 I saw the prototype for the FJ Cruiser, and in the middle of my FJ40 resto project, someone came into my garage with cash and bought it out from under me. (Some regrets) In 2008, I flew out to LA to pick up my FJ Cruiser, special ordered with the Offroad Package (Locker) and MT6. My area of operations has been Southern Arizona, from the New Mexico to California borders. Unfortunately, the FJ Cruiser burned in a fire in August 2020. Now I'm building up from the ashes, literally, salvaged parts from the FJ are going on my Lexus GX470. SO, that's what's coming out next. I have been an active member of AZFJ.org where I'm the top post contributor, and have many trail reviews posted there that I plan on enhancing, revisiting and documenting for this authoritative source. I have a login to Ih8Mud and fjcruiserforums but don't lurk there very much. in my career, I've had the pleasure of traveling in Canada, the Caribbean, and Australia but never had the opportunity to wheel there. (bucket list). But, I hope my 30 years of Southern Arizona discovery, teaching and leading people into the backcountry will finally benefit a wider audience here on Trailsoffroad. There's nothing I enjoy more than finding a historic site, a little-used trail that had significance or the opportunity to take that one photo that defines what we do. (I stink but I'm willing to learn). Oh..Added benefit...I'm the GIS analyst for a fire dept and as such have some skills in ArcGIS.

I had this trail all to myself late on a Friday afternoon. I wanted to see what the end of the road looked like, and the Trails Offroad route didn't disappoint. The toughest part was the "Rocky Descent" at Waypoint #2. This was really the first time I had my GX470 out on a trail tougher than a gravel road, and this spot necessitated some careful line choosing. There are basically two ways down, the one on the right (heading south) seemed much rockier but shorter and straighter. The one on the left was more washed out and curved but seemed to have smaller boulders. Both are tough. As I got to the bottom of these rocks, I realized that I had to return over and up them, which again caused anxiety. This anxiety was unnecessary it turned out as the return trip, I took the Right (Now left heading north) shorter straighter rockier ascent, and put it in 4x4 low, and slowly crawled up it. (In my mind I kept telling myself that this is a Landcruiser Prado120, used by the Aussies to go anywhere) and I had full belly armor, so at the end of the day, slow and cautious saved the adventure. I found the overlook to Woods Canyon, although the best view is about 100' further beyond the waypoint #3 and about a 50' walk down the hillside to a nice rock overhang ledge that will offer spectacular views. The tank at the end (Jack's tank) had some water in it, but I didnt' spook up any elk or deer. more's the pity. The best part of this entire trail, (Besides theWoods canyon overlook) are the huge Alligator Junipers, and there are a mess of them. I bet everybody stops for a photo at the spot I did.

I love this road, such a great combination of Pines, rough rocks to scramble on and beautiful wildflowers. Lots of em, mostly yellow ones that covered the forest floor. It was fun to compare what the Trails Offroad waypoints looked like without flowers. I was a bit apprehensive to be out on this alone in my GX470, but the directions and descriptions made that go away pretty quickly. You have to pay attention to where you are turning so that you don't end off in a maze of trees. I ran into a Four Runner pulling a teardrop trailer out of the area and they said that it was kind of rough for their setup, but doable. They didn't find the overlook they were seeking out on the Woods Canyon Waypoint for FR9496. Visited that one too.

It seems that nature has reclaimed the lead. Locals at the general store advised that rockslides and washouts have rendered the road ,"non driveable" looks like Waypoint 13 through Waypoint 19 are impacted. Catalina Ranger District - Control Road Closure Order Map

Looks like the upper lake is about dried up, as reported by a friend who wheeled up there last week.

Ran this trail with 20 other rigs on the annual AZFJ border run. The surface was a little more rutted than previous visits, and the switchback at Waypoint 11 had more of a washout than the last time I remember. Still a very fun trail, and still needs 4Lo to navigate. The tree that was down on the trail at Waypoint 8 is gone. Much greener out there after the heavy monsoon we have experienced in Southern AZ.

KGUN9 Did a Story on the Pass tonight

Short and sweet. This is an awsome camp spot right on the river. Only downside was the low rainclouds which spoiled the view.

Drove down and camped near the middle fork of the Cimarron River. We encountered a cattle roundup on FR838.3J where we camped and were treated to rain, thunder, lightning and incessant "moooing" all night. In the morning, all those cattle were loaded into a semi and off to processing, we ran into the truck on 838. The road from Owl Creek pass to the Uncompaghre forest boundary was pretty washboardy. Prepare your kidneys for a workout. The reservoir was indeed uber full.

Traveled here on a wet weekday. I was astounded at the amount of "Covid Campers" along the road. The road is in great condition even when wet as it was this time. Took a side trip down 861.1b and confirmed the awesomeness of the camping there. I'll add that as a trail soon. Spotted a young bull elk. Not good on views during the rains.

Apache-sitgreaves NF has opened with stage II fire restrictions FR300 open to the coconino NF boundary, which remains closed due to the backbone fire

Apache-Sitgreaves forest is closed.. https://www.fs.usda.gov/alerts/asnf/alerts-notices/ And so is this trail temporarily

Closed per Forest Service Order! Rim Rd is going to be closed off after Waypoint 28. (The Apache Sitgreaves portion is still under Stage II but open) Too many fires, to little rainfall Coconino Forest Closure Stage III

I was apprehensive about running up this trail as the Bighorn fire from June of 2020 burned 119,000+ acres of the top of the Catalina Mountains. I was expecting a Moonscape with blackened sticks where once the pines stood. Was I wrong!, While there are changes that warranted a trail rewrite, I was pleasantly surprised that the experience is still there, the road very easy, and the views enhanced. A new Forest Sign at Peppersauce Campground with Kiosk for RIce Peak Pavement extended two miles to the Zip Line, and lots of good trees cover up on top. As of June 2021, the road had been serviced by the county grader and is now suitable for any passenger vehicle. (Not motor homes or travel trailers as there are numerous switchbacks). Monsoon rains generally wash away the dirt grading and expose the rocky outcrops. This trail will likely return to a '2' in the fall. We started out in oracle at the Circle "K", which now has just regular "87" gas, and Diesel. The Circle K at old Waypoint #2 is closed and fenced. It's going away in the re-write.

San Juan Forest Trail Status. Middle Fork of the Cimarron River is in this forest and is reported as OPEN.

San Juan Forest Trail Status. East Fork of the Cimarron River is in this forest and is reported as OPEN.

San Juan Forest Trail Status. West Fork of the Cimarron River, is in this forest and is reported as OPEN.

San Juan Forest Trail Status. Owl Creek Pass is in this forest and is reported as OPEN.

San Juan Forest Trail Status. Silver Jack Rd 838, is in this forest and is reported as OPEN.

What a great windy day to visit out here. The trail is in moderately good shape, with only a couple of washouts between waypoints 14 & 15. Google still lists this trail incorrectly, leading some to become trapped if they follow the 'Redington road'. (see screengrab). In the creek, there was a dad & son playing with RC cars. It was fun to watch. The cottonwoods were greening up, as were the mesquite. Since this is outside the Coronado forest and about 15 miles past the start of the Redington road, it's not popularly known, however, we did encounter a few side-by-sides way out here.

Looks like a jeep rollover recovery happened Thursday between WP 9 & 10. Daughters nextdoor neighbor Steve did the recovery. Right on the double switchback before Peppersauce cave.

According to the Coronado National Forest, this road is OPEN. Time to go take a look at the forest damage. Kstrong>Coronado Forest Road Status -
Click for larger Image